So. Ill. interstate (finally) gets a name

This observation comes from someone who has driven automobiles from the Illinois/Wisconsin border to just north of that point where Illinois becomes one with Kentucky and Missouri – we in Chicago put names on our interstate highways, while the rest of the state seems content to think of their roads by numbers.

What we call the Stevenson Expressway is what the rest of Illinois prefers to think of as Interstate 55, while Interstate 90 gets called the Jane Addams Highway or the Kennedy Expressway, depending on whether one is south or north of downtown Chicago.

INTERSTATE 94 CAN be more confusing, because many Chicago residents don’t think of it as a single road. Depending on which portion of I-94 one is on, the road is the Edens expressway, the Tri-State Tollway or the Bishop Ford freeway.

The Dan Ryan Expressway is unique, since it comprises both I-94 and I-90.

Of course, one shouldn’t think of Chicago expressways in purely Democratic (or urban) terms. Former presidents Dwight Eisenhower and Ronald Reagan are the two Republican recipients of Chicago-area expressways (Interstate 290 and Interstate 88, respectively) named in their honor.

In fact, about the only portion of an interstate highway in Illinois outside of the Chicago area that is named for a human being is that portion of Interstate 70 near East St. Louis known as the McGwire Expressway in honor of the former St. Louis Cardinals’ slugger whose “historic” home run achievement of 1998 only lasted as a record for four years. 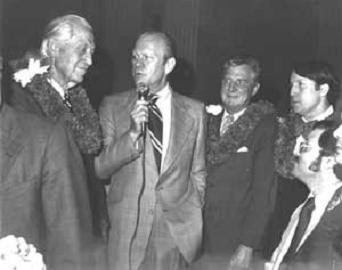 Ken Gray, here seen in 1974 with his congressional colleague-turned-president, Gerald Ford, was from an era when representatives boasted of the large amounts of federal money they brought back to their home districts. Now, they get derided for swimming in "pork." Photograph provided by http://www.illinoisstatesociety.org/

WHICH IS WHY I think it is about time that a downstate Illinois portion of an interstate highway gets a politico’s name attached to it.

Ken Gray, the longtime member of Congress from Southern Illinois, gets the honor of being the first.

He is going to have the portion of Interstate 57 that passes through Mount Vernon (about 240 miles south of Chicago, or 150 miles east of St. Louis at the site of the 200-foot-high Christian cross that looms over the interstate) named in his honor. It is not far from his hometown of West Frankfort.

Gray gets the honor in part because he was one of the members of Congress back in 1956 when Eisenhower signed into law the measure that created the concept of interstate highways – and significantly altering the life perspective of people who grew up in towns along U.S. Route 66 (Chicago to Los Angeles) and the Lincoln Highway (New York to San Francisco, passing through Chicago Heights, Ill.).

SOUTHERN ILLINOIS’ POLITICAL observers this week were digging up the old Kenny Gray stories about how he forced Interstate 57 (Chicago to Memphis, then down to New Orleans) to cut through his home region – by threatening to withhold his needed vote for construction of the entire interstate highway system.

Now to some people, that story is everything that is wrong with government today – a political official having a snit fit until a road is built through his community at taxpayer expense. They would take offense at the notion that during 24 years in Congress, Gray was proud to say he brought back $7 billion worth of federal projects to his home district.

But do people really believe the region of Southern Illinois (the portion of the state that lies below Interstate 70) would be better off if there weren’t major highways connecting the region to Chicago, St. Louis and Memphis?

I have driven on some of those rural highways of Southern Illinois, and on a couple of occasions, I have done it in the dark. One of the most terrifying road moments I ever experienced was trying to find the town of Tamms (located 12 miles north of Illinois’ southernmost tip) and winding up in the woods on a rural road (unnamed or numbered, as far as I can tell) just north of Anna. The road that led me to that point apparently used to be fairly common in that region, until the coming of the interstates.

THERE’S ONE PART of the renaming of the interstate portion for Kenny Gray that I find ironic – that it will alter a portion of Interstate 57.

That is the one interstate of the Chicago area that does not have a name of some now-forgotten personage attached to it.

I can already hear the grumbling from Southern Illinois residents whenever they hear a Chicagoan in the future talk about “I-57” – “why can’t those dummies call it the Gray Expressway the way we do,” they’ll say, similar to the way we complain about “half-wit downstaters” who insist on calling it I-55, rather than by its proper name honoring Adlai E., the second.

EDITOR’S NOTE: Here’s a breakdown on all of the interstate highways that pass through Chicago (http://www.jameson.com/chicago_freeway_names.cfm) and help the city maintain its image as the transportation crossroads of the United States.

Long-haul truck drivers (http://www.truckingboards.com/trucking/upload/trucking-news/35118-freeway-stretch-named-after-ex-congressman.html) already are taking note of the I-57 name change.

Email ThisBlogThis!Share to TwitterShare to FacebookShare to Pinterest
Labels: automobile travel, I-55, I-57, I-88, I-90, I-94, interstate highways, Ken Gray, Southern Illinois, urban vs. rural