When Chelsea Clinton ventured into the fringes of the Chicago metropolitan area on Sunday, she was trying to accomplish two goals – urge people in what ostensibly is “Obama Country” to consider voting for her mother and to remind Latinos that they are a natural part of the Clinton constituency.

Chelsea is doing the rounds of Indiana, visiting various Hoosier towns and trying to steal some votes from Barack Obama’s base, which also will result in slightly more delegates going to her mother.

BUT MORE IMPORTANTLY, she’s giving some Indianans a sense of personal contact with the Clintons, even though Hillary herself was too busy to visit herself and potential first gentleman Bill Clinton couldn’t be bothered.

Oddly enough, a family member will give some of these people in attendance a memory of Clinton contact that they will remember for years to come.

In some cases (such as appearances at Purdue, Indiana State and Southern Indiana universities), a Chelsea appearance may mean even more, since some college students who are not quite politically astute will feel more comfortable with someone close to their age (Chelsea is not quite 28) than with an “old fogy” like Hillary (she’s 60). 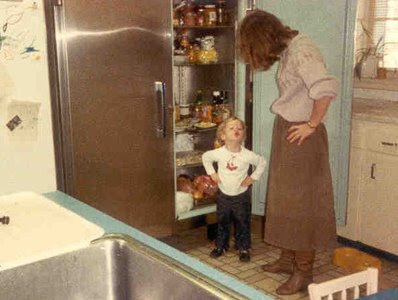 Whodathunkit? This sweet looking little girl grew up into a polished young lady who's working the campaign circuit to try to get her mother elected president. Photograph provided by Hillary Clinton for President.

That age factor has been the reason the Obama campaign has had some appeal (he’s 46, and had a reputation as an instructor at University of Chicago Law School as one of the “cool” professors on campus) to the collegiate set.

SO IT WAS not surprising when Chelsea Clinton took on the appearance Sunday in East Chicago, Ind.

It wasn’t a college-kid event, but she kicked off this segment of an Indiana tour by speaking before the Associacion de Hijos Borinquen – a group of young people that promotes Puerto Rican pride and tries to prepare its members for full-fledged work in the adult version of the local Puerto Rican cultural group.

Chelsea got to do her youth routine, making a batch of people who quite possibly will be voting for the first time ever on May 6 (the Indiana primary) or Nov. 4 (the general election) to want to cast ballots for Hillary R. Clinton.

She actually had a second appearance, one in Chicago proper. But that event was closed to the public, as she was merely trying to get some of the city’s wealthier elements to consider writing checks to Hillary for President so as to allow the Clinton campaign to continue to be competitive.

ONE THING CHELSEA Clinton did not do Sunday was engage in a repeat of two previous campaign appearances, where she became all flustered when locals dared to ask her questions about her father’s sexual trysts with an intern while he was president.

Those appearances resulted in national attention for Chelsea, and the beginnings of a debate over what kinds of questions are appropriate for a political sibling. My own belief is that if a political kid is going to use their image to build up goodwill for a parent, then they’re also going to have to accept the negative – including the occasional hostile reaction from people who are opposed to their parents being in electoral politics.

But Chelsea’s appearances (she will forever have to live down the image of someone who got all flustered at the asking of a rude question) truly were the exception. The last thing that is ever supposed to happen (from a campaign’s perspective) is for news to be made by a candidate’s kid.

When Paul Simon ran for his first term in the U.S. Senate in 1984, his campaign used his wife Jeanne (who was the outspoken member of that family) and offspring, Sheila and Martin, to be his surrogates and make appearances meant to promote the Simon “message” and encourage people to cast their votes for him come Election Day.

THAT IS WHY on a day in autumn 1984, about one month prior to the November election that saw Ronald Reagan fulfill the fantasies of every Republican across the nation, Sheila and Martin made a joint appearance in Bloomington at the campus of Illinois Wesleyan University.

I was a student there at the time (1984 was the first election in which I was old enough to vote), and I still remember the appearance, primarily because it was so non-memorable. The Simon sibs made sure to promote their father’s name without doing anything even remotely controversial.

We could have seen Simon himself had we been willing to make trips to Chicago or Springfield, but our studies kept us on campus.

The surrogate appearances made us young Democrats on the IWU campus feel like we got our touch of face-time with the campaign, and made us feel like we should want to be a part of the Election Day effort that resulted in the southern Illinois congressman winning his election for a statewide office, which he eventually held for 12 years prior to retiring from elective politics.

I SUSPECT THAT is the same feeling that young people in the Puerto Rican cultural group felt when they got to meet Chelsea, even though for her it was just one of four stops she made Sunday and likely is one of just many that is blending into her mind as one mass of campaign activity – with one town hardly more notable than the next.

The Chelsea Clinton event in East Chicago, Ind., served one other purpose.

It was meant to remind the Latino population of East Chicago that they are a natural part of the Clinton constituency, even though surrounding Lake County, Ind., itself is a natural extension of the Chicago area that is the base of Obama Country.

CHELSEA WAS IN East Chicago to remind the significant Latino gathering that their ethnic counterparts in other states have been a significant part of the Clinton camp (Obama has only taken Latino vote majorities in Illinois and Virginia) during the 42 states or territories that have held primaries or caucuses thus far.

If she were to let the Latino vote fall into the hands of Obama, some political analysts would interpret it as a sign that Hillary Clinton is losing her grasp on Hispanic support. It may be a lame viewpoint, but most political analysis involves taking a miniscule tidbit and blowing it out into an event of major significance.

Hillary Clinton needs to take the Indiana Hispanic vote just to save face, even if she loses the state as a whole to Obama. And if she were to win the state, but lose the Latinos of Lake County, Ind., Barack backers would claim a moral victory of their own.

EDITOR’S NOTE: Chelsea Clinton apparently is just like many political people – she exists on her own time clock. Her East Chicago appearance got re-scheduled so many times (http://www.post-trib.com/news/880480,chelseaec0406.article) before she finally (http://www.thetimesonline.com/articles/2008/04/05/updates/breaking_news/doc47f7efcef0857238493585.txt) showed up to give rote answers to questions on various issues.