Greens will go the way of Solidarity and Washington (political parties, that is)

I recently made a wisecrack in one of my commentaries implying that the Green Party, which has acquired status in Illinois as a fully legitimate political entity, is destined to go the way of the Harold Washington Party.

That party in Chicago, along with the Solidarity Party in Illinois, experienced a few years of equal status to the Democrats or Republicans due to an electoral fluke, only to wither away when they were unable to maintain their popularity.

OF COURSE, MY wisecrack resulted in a completely serious response from a Green Party spokesman who tells me that the Green Party is here in Illinois to stay.

That reader pointed out the very thorough slate of candidates running for office on the party label. That slate was compiled earlier this week when Green officials picked people to run for office in the electoral districts to which they did not choose nominees in the Feb. 5 primary.

Hence, the Greens are not just Ralph Nader. In fact, he could very well be the least important aspect of the Green Party across the Land of Lincoln. 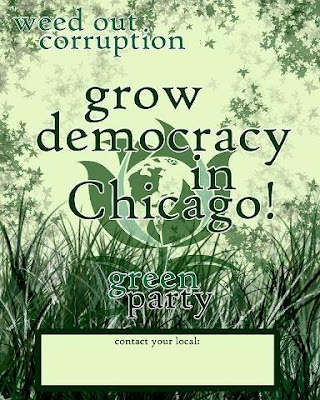 Ralph Nader and the Green Party will give Chicago its first nominating convention in 48 years for a political party other than the Democrats. Illustration provided by http://www.secondcitygreens.org/.

They have a U.S. Senate candidate, along with 14 congressional dreamers, several people wanting to run for seats in the Illinois House and state Senate and 26 others wishing to run for county government offices across the state.

BUT WHILE THE Obama/Clinton brawl is destined to culminate in Denver, and the people of Minneapolis-St. Paul will be swimming in a political love-fest for John McCain, Chicago is going to go Green.

Yes, the Green Party is going to have its own political convention this summer. Green Party backers from across the United States will converge on the Second City July 10-13 to heed the call for change in our electoral system, and it will culminate with Nader trying to stir up the troops to believe they have a chance to be relevant come the Nov. 4 general elections.

There goes my sarcasm, ringing like an obnoxious warning bell to tell me (and you) that none of this Green Party activity is any different than what happened with the Washington or Solidarity parties.

One of the safest bets anybody could make with regards to electoral politics these days is to put money down on the fact that the Green Party in Illinois will wither away in 2010 – the next year that state government posts are up for grabs.

NOW THE PERSON who chided me for mocking the Greens in Illinois said the difference between them and the other two third parties I have mentioned is that both of them were based around a personality, while the Greens are allegedly based around an ideal.

This person is half right. The Solidarity Party was created when Democratic gubernatorial nominee Adlai Stevenson III had his campaign thrown out of whack by followers of Lyndon LaRouche. His attempt to run separate of the “tainted” Democrats that year resulted in a political party with legitimate status that got taken over in future years by fringe candidates who used its legitimacy to make it easier for them to get spots on Election Day ballots.

The same goes for the Harold Washington Party, which was created following the death of its namesake mayor of Chicago who wanted a third political party in the city to support the concept of African-American political candidates to run against Mayor Richard M. Daley and the tokens put up by the Republican party.

Stevenson, Washington. To that list, we must add the name of Rod Blagojevich. Let’s be honest. If not for the existence of the governor and his unpopularity in certain circles, there’s no way the Green Party would have received so many votes.

NOBODY WAS VOTING in 2006 for Rich Whitney to be Illinois governor. Most people knew nothing of the man, and certainly wouldn’t have thought him fit to hold the gubernatorial post.

What they were using the Whitney vote for was a way of showing their disgust with Blagojevich, while also refusing to support the Republican gubernatorial dreams of Judy Baar Topinka. They really were voting for “none of the above,” although Whitney got to have his name used for that slot.

Because of that, his 10 percent of the vote is double the amount of support a party needs to show to claim legitimate status. So long as the Green Party can keep finding a candidate who can win at least 5 percent of the overall vote in an election, they can keep their equal status to the Democrats and Republicans.

The reason the Solidarity and Washington parties fizzled out is that the personalities that originally inspired them for a single election had no interest in maintaining them. Stevenson has always been a loyal Democrat, while the African-American politicos who admire Washington have also returned to the fold.

THE THIRD PARTIES turned into the place for people who perennially operate on the fringe of electoral politics. That is bound to happen to the Greens.

The perception of the Green Party among many people, particularly those so far to the right on social issues, is of a group of people who have been so stoned for so many years that they don’t realize the year 1968 is over. We’re going to hear a lot of jokes about aging hippies coming to Chicago, perhaps to reprise the ’68 Democratic convention protests in Grant Park.

But that image really isn’t true. The Green Party is becoming the place for all the people who just aren’t practical about their politics, and they don’t have to be liberal.

IF THE GREEN Party were truly a liberal place, there’s no way that Chad Koppie of Gilberts, Ill., would have seriously considered using the party label to run a campaign for the U.S. Senate. Koppie is the retired airline pilot who has run so many fringe political campaigns for Senate, governor and Congress – usually to tout his pro-gun and anti-abortion views.

He’s the candidate who has aired graphic campaign ads depicting aborted fetuses and who has dumped bags of manure on the steps of the Statehouse in Springfield to protest the General Assembly’s actions.

Let’s also hear it for the Green Party’s choice for an Illinois House seat in the northwest suburbs of Chicago. Rob Sherman, the atheist activist from Buffalo Grove who most recently is trashing state Rep. Monique Davis, D-Chicago, for her attack on his beliefs during a legislative committee hearing, is one of the Greens.

THE GREENS MAY have taken a pass on Koppie this time (Cathy Cummings of Chicago got the nomination), but these are the type of political people who are going to be attracted to the organization – those to whom the Democrats and Republicans are unappealing because they try to reach a middle ground on issues. These people would rather play hard-core politics around specific issues – and lose.

With a pair like Koppie and Sherman amongst their followers, the Green Party is not building up a structure that will ever appeal to the masses.

That is what makes it likely that no Green Party candidate will get 5 percent of the vote in 2010, and why we’ll be able to bury the Illinois Green Party corpse next to the remains of the Washington and Solidarity parties.

EDITOR’S NOTES: If you care, a thorough list of all the Green Party candidates in Illinois (http://thirdpartywatch.com/2008/04/07/illinois-greens-running-60-candidates-in-08/) can be found here.

Rob Sherman is using the Green Party label to run a campaign for an Illinois House seat from northwest suburban (http://www.pioneerlocal.com/wheeling/news/882275,bg-sherman-040708-s1.article) Cook County. Somehow, I don’t think he’ll ever be a colleague of state Rep. Monique Davis, D-Chicago.

Though Ralph Nader ran with the Greens in 1996 and 2000 and shares the same values as the Greens. He is NOT a member of the Green Party and refuses to join. He isn't interested in building the Green Party locally and thus I don't consider him our standard bearer. I get really annoyed when people say he is a Green when he doesn't even self-identify himself as a Green.

Now on the whole notion that the Illinois Green Party is going away is totally absurd. The Green Party was around since 1996. Whether we do or do not retain ballot access in 2010 will not determine if will go away. We have 13+ local chapters or so around the state and we are continuing to grow. None of that is going away in one election. We believe in bottom-up politics and firmly believe that once we win some local offices, people will see that Greens are good at governing. People find Greens in government are more pragmatic than they think and that we are fiscally responsible.

In fact we already have Greens serving in the state you can find here: http://ilgp.org/elections/current-elected-greens-in-illinois

Face it, we're here to stay. And the Democrats know that. That's why they've created a bill targeting the Greens (HB 5263); legislating onerous slating requirements.