I hate to think that the career of comedian John Caponera 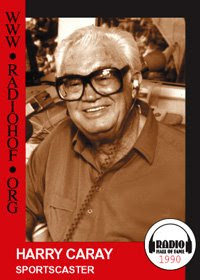 will suffer a lasting blow due to his latest acting gig – portraying the essence of late baseball broadcaster Harry Caray in a television commercial for AT&T.

But considering the irrational level of thought often achieved by Chicago Cubs fans (who else would root for a ball club that is going to go at least 100 full seasons without a World Series victory), it might be, it could be, it is.

CAPONERA COULD GO through the rest of his acting career as the guy who “besmirched” the reputation of Caray – a decade after his death.

At stake was the television spot that AT&T used to promote its telecommunications services. It consisted of Caponera doing a third-rate impersonation of Caray’s shtick, or at least what it had devolved to by the time he began broadcasting baseball for the Cubs.

Caponera as Caray doing corny puns and words spelled backward while speaking in a slurred voice that was supposed to resemble Caray’s unique speech pattern (which itself was influenced by often imbibing too much Budweiser).

Caray’s widow, Dutchie, remains miffed about the spot, although I understand AT&T felt the need to appease her with an apology for taking the name of Caray in vain.

NOW I CAN understand that since she knew the real man (instead of the drunken caricature most of the rest of us saw on television), she is likely to take anything related to Harry just a bit too seriously.

And I have to confess – I hated the ad as well.

But I couldn’t stand it for a very different reason than all the other people who have supported Dutchie in being disgusted with AT&T for using the Caray image in their effort to promote their products.

What does a long-dead broadcaster whose professional peak occurred decades ago in another city (St. Louis) have to do with AT&T?

I never could figure out what the point was of having a Caray impersonator in their advertising. I still don’t know how the Caponera routine in any way promoted AT&T products or services.

It wasn’t even particularly clever in a way that would make us think associate humor or intelligence with AT&T. In short, the commercial deserved to get lost in the shuffle of advertising images that bombard us through our television sets.

Yet to listen to Cubs fans, it was insulting. It degraded the public persona of a wonderful man who ought to be above public criticism. How dare they treat Harry with anything less than respect. We all ought to genuflect before the image of the great Harry Caray, whose five-plus decades-long career as a major league baseball broadcaster reached such intense highs that he is one of the few broadcasters honored in the Baseball Hall of Fame in Cooperstown, N.Y.

I’ll be the first to admit that Caray as a broadcaster was a true talent. He was unique when he was in his prime. Listening to old tapes of Caray doing baseball (being the “Voice of the Fan” who would think nothing of trashing a ballplayer if he got lazy on the playing field) makes us realize how just about all contemporary broadcasters are mediocrities who don’t deserve to say they worked in the same profession as Caray.

But those old recordings would be the Harry Caray who was the voice of the St. Louis Cardinals on KMOX-AM and the network of small-town radio stations across the south and southwest that carried Caray’s accounts of Cardinals games from Alabama to Oklahoma and made the Cardinals “America’s Team” in a way that the Dallas Cowboys could only dream of being.

LIKE EVERYBODY ELSE, age causes a person to deteriorate physically. Those of us who followed Caray back in the 1970s when he was the voice of the Chicago White Sox got to see touches of the Harry Caray of old (I still remember him trashing second baseman Jorge Orta by saying, “How could he lose a ball in the sun, he’s from Mexico?”), particularly when he was paired up with Jimmy Piersall – making the two possibly the most sarcastic pairing ever to broadcast baseball games.

By the time Caray got to the Cubs, he was 68. Nobody is going to be the same at that age as they were in their physical prime (the Vin Scully of today is terrible compared to his peak in the 1960s broadcasting the Los Angeles Dodgers – only the fact that most modern broadcasters are absolutely awful allows Scully to still be thought of as one of the best).

Hence, the Caray that did Cubs games often became a god-awful parody that butchered names (particularly of any ballplayer from a Latin American country) and did the awful puns (“Mets spelled backward is Stem,” he really said it on-air). There is a sense that what Caponera did in the commercial was nothing more than capturing the essence of Chicago Cubs Caray, rather than focusing on Harry in his prime.

Cardinals Caray is the broadcaster who deserves to be in the Hall of Fame, while Cubs Caray was tacky and sometimes hard to watch. (White Sox Caray was a different breed altogether – he said and did things no other ball club would have tolerated because Sox owner Bill Veeck was such a maverick himself).

I ALWAYS THOUGHT that Caray should have seriously considered retiring some time about 1984. That would have allowed him to end his career with a winning ballclub (the Cubs won their first division title ever that year, and finished a regular season in first place for the first time since 1945).

It also would have allowed him to get a sense of revenge against the White Sox, where he was cut loose after 1981 because then-new owners Jerry Reinsdorf and Eddie Einhorn wanted to reshape the broadcasts in their own image (Does anybody else remember the Chicago broadcast work of Don Drysdale?) rather than Caray’s image of a hard-drinking South Sider (which in some ways is so fitting for the Sox).

Caray would have been able to retire on his own terms, and on top of his game. We never would have had to endure the aging man whose performance diminished his reputation. And he wouldn’t have provided fodder for half-wit impersonations like the one done by Caponera.

EDITOR’S NOTES: John Caponera says he wasn’t trying to be insulting to the memory (http://www.suntimes.com/lifestyles/hoekstra/872646,CST-FTR-harry02.article) of Harry Caray. Lots of Cubs fans (most of whom take themselves way too seriously) disagree.

The restaurant chain (http://www.harrycarays.com/) that pays tribute to the broadcaster who made “Holy Cow” a baseball catchphrase, even though fans of Phil Rizzuto of the New York Yankees like to think he said it first (he didn’t).

Some words of wisdom (http://www.baseball-almanac.com/quotes/quocaray.shtml) from Harry Christopher Carabina.

In an era when sports broadcasters are nothing more than former ballplayers who need a job, Caray (http://www.radiohof.org/sportscasters/harrycaray.html) is a unique breed. He was an actual broadcast professional whose concern was being on the air, not just being inside the ballpark so he wouldn’t have to work for a living.
Posted by Gregory Tejeda at 12:00 AM