What's wrong with minding one's own business, rather than somebody else's?

So on a day when students at high schools across the United States tried to show their support for gay people being treated like everybody else by staying silent, one student in the outermost Chicago suburbs was happy that he got to speak out against them.

That was the case at Neuqua Valley High School, where the federal appeals court for the Chicago area ruled earlier this week that Alex Nuxoll could wear his t-shirt to school – the one that reads, “Be Happy, Not Gay.”

NUXOLL, WHOSE PARENTS and other ideological supporters filed a lawsuit on his behalf after school officials banned the t-shirt on the grounds it was “derogatory” and “demeaning,” does not care for the fact that his high school is one of about 7,400 schools across the country partaking in the Day of Silence – an event that is supposed to promote the concept that gay people in our society are forced to keep their perspectives to themselves in order to avoid harassment.

Students in theory go through an entire day without saying a word, and some will go so far as to hand out pre-printed cards that detail harassment against gay people.

So Nuxoll wanted to wear his t-shirt on Friday, and again on Monday, when a ‘Day of Truth’ is scheduled, according to the Daily Herald newspaper of Arlington Heights. 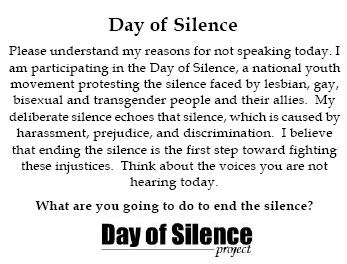 Students partaking in the Day of Silence handed out cards such as these to explain their lack of speech. Illustration provided by Day of Silence Project.

The appeals court’s order is valid until larger issues in the lawsuit are resolved, which could be later this year. Their lawsuit has the support (emotional and financial) from the Memphis, Tenn.-based Alliance Defense Fund, which means this fight will go the full 15 rounds – so to speak.

ATTORNEYS FOR THE alliance say they are pleased with this week’s ruling, seeing it as a sign they may prevail in their larger goal – which is to give legitimacy to someone who wants to dump on gay people.

This case isn’t just about a kid wanting to wear a t-shirt. Anybody who tries to portray it as such is trying to dodge the real issue – which is whether people have a right to pick on others because of sexual orientation.

I have always been of the belief that I have enough problems with my own (admittedly miniscule, these days) sex life, without having to worry about anyone else’s. I can’t help but see anyone trying to speak out against such gay rights measures as being someone who wants to butt into someone else’s business.

Or how does that old saying go – “He doesn’t have any business of his own to mind, so he has to mind everybody else’s.”

OF COURSE, THE court ruling this week has the social conservatives all excited that someone is finally willing to let one of their own “speak his mind,” even though from my perspective, we hear all too much of their viewpoint.

These people want to argue that a victory for free speech was won this week when a student was allowed to wear his t-shirt. After all, their viewpoint must be heard too, and any attempt to point out errors in their way of thinking amounts to censorship.

Sorry, but I don’t buy that theory.

What an event like a ‘Day of Silence’ is about is a symbolic gesture against harassment of people. It’s a bit simplistic to say that anyone speaking out against such an event is for harassment.

BUT IT’S NOT totally erroneous either.

Whenever people complain about measures meant to protect gay people by claiming they are being given special privileges, it comes off too much like they believe gay people are entitled to be harassed.

Either that, or their own lives are so wretched they are looking for someone they can place beneath themselves on the societal pecking order so they can harass someone too.

That is the message that comes from someone who wants to wear a t-shirt reading, “Be Happy, Not Gay.”

IF ANYTHING, THE student wearing such a shirt is trying to disrupt an event promoting equality, which is why I find it ridiculous that Illinois Family Institute officials (in a statement denouncing the very concept of a ‘Day of Silence’) claimed the event would disrupt the school day.

Personally, the thought of students keeping quiet for just a day sounds like every teacher’s fantasy work day come true. Students engaged in personal reflection on a societal issue, rather than babbling on about the latest teenage trivia, has the potential to be an educational experience.

Now this may be a free country where people are allowed to think what they want. I will concede your legal right to wear such a slogan on your t-shirt. But one needs to consider that what is legally permissible is not always the smartest thing to do. In this case, wearing such a t-shirt on a day of contemplation of gay rights is little more than rude.

Also, this being the United States of America – the land of the free and home of the brave and such a wonderful country – I have the equal right to think you are a nitwit for wearing such a shirt and thinking such a thought.

FREE SPEECH IS for everybody, and students who partook in Friday’s ‘Day of Silence’ events were merely presenting a thought – even though it is the ultimate in irony to present their viewpoint by saying nothing all day.

If by chance, you try to retort that such a thought ought not to be expressed (which is the tone I detect in the Illinois Family Institute statement and in comments from similar groups), then all I have to say is that your attempt to restrict a thought is just wrong.

EDITOR’S NOTES: Students across the United States said nothing to show their support for equal treatment for all (http://www.dayofsilence.org/), putting a special emphasis this year on a Feb. 12 incident in California where a teenager were brutally beaten for his sexual orientation.

Opposing groups are trying to coordinate their own ‘Day of Truth’ for Monday so as to counter (http://www.dayoftruth.org/main/default.aspx) Friday’s activity.

Such dueling statements may very well be a part of The American Way, but some Australians (http://www.samesame.com.au/news/international/2081/Day-Of-Silence-Vs-Day-Of-Truth.htm) think we’re a batch of nitwits for getting into these dueling days over the issue.

Alex Nuxoll got to wear (http://www.dailyherald.com/story/?id=179036&src=2) his t-shirt to school, after all. I can remember when the most controversial t-shirt to be seen in a school was one with that ‘never classic’ saying, “If I said you had a nice body, would you hold it against me?”
Posted by Gregory Tejeda at 12:01 AM