Somebody needed an editor 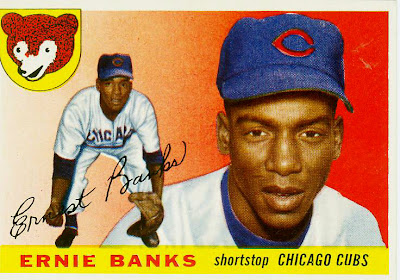 Ernie Banks, back in the days when he was a young man and the second-best shortstop then playing baseball in Chicago.

I always suspected that Chicago Cubs fans were functionally illiterate.

at expresses his love of baseball, I can’t help but think the most pathetic part of this episode is the artist trying to justify his error by claiming he created something that “sounded right” in his mind.

Either he wasn’t paying attention during grammar and English composition, or too many Cubs games have turned his brain to mush.

So now the Banks statue can collect bird droppings at Clark and Addison streets similar to the way the statue of long-time baseball broadcaster Haray Caray at Addison and Sheffield streets attracts people who insist on putting cans of Budweiser beer in Harry’s hand.

EDITOR’S NOTE: This story will have to fulfill local baseball fans for the next five days until Monday (http://www.upi.com/NewsTrack/Quirks/2008/04/02/editing_required_for_ernie_banks_statute/1941/), which is the only Opening Day in Chicago that truly matters.
Posted by Gregory Tejeda at 12:00 AM