First Lady Michelle Obama this week will be in Mexico, making an official trip on behalf of the United States of America to offer up a more gentile persona for this nation than was offered when her husband ventured to Mexico last year.

Such trips for a first lady are routine. She may have no official duties, but a first lady can make herself useful to U.S. policy abroad – if she is so inclined. 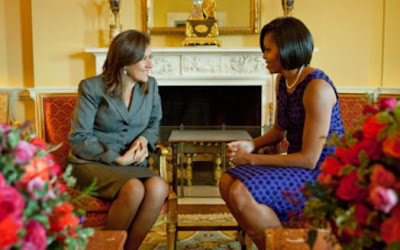 The first ladies of the United States and Mexico met previously in Washington. But Michelle Obama's trip this week to Mexico City is causing more than its share of ridiculous politically-partisan rants. Photograph provided by federal government of Mexico.

THAT TRIP, FOR which she leaves the U.S. on Tuesday, is being anticipated greatly in some circles. The U.S. ambassador in Mexico City says he anticipates Michelle will “wow” the Mexican people with her persona.

We’re even getting comparisons between this trip and the one that then-First Lady Jacqueline Kennedy made to Mexico in 1962, which really caught the attention of people when we figured out that Jackie’s education included conversational Spanish.

She was able to say enough to be understood by Mexicans when she made some public comments. At the very least, there were no “ich bin ein Berliner” moments that cause modern-day JFK opponents to make jokes about the president wanting a jelly doughnut.

But perhaps it is more evidence of how much our political environment has changed in the past two decades – ever since the first “baby boomer” to be elected president happened to be someone from the “left” end of the political spectrum.

MICHELLE OBAMA IS getting her share of criticism for making what some people want to believe is a frivolous trip that wastes federal funds. Others just want to engage in Mexico-bashing, while some others are just looking for an excuse for yet another Obama “dig.” His wife will fill in perfectly for the president himself, when it comes to a reason to insult.

For the record, Michelle will have some meetings with Mexico’s first lady, Margarita Zavala de Calderòn, and will also engage in the social settings that are meant to ensure that relations between the two nations remain civil.

In those one-on-one sessions, the two are expected to discuss a pet issue of Zavala’s – obesity, particularly among children. Guess what, that is something our two nations have in common. Too many U.S. and Mexico citizens are overweight.

For Mexico, the statistics are 4.5 million children and 6 million teenagers who are either overweight or obese. Considering that Mexico’s total population is 110 million, that makes up nearly 10 percent of the total overweight just because of the kids.

SIMILAR CONDITIONS EXIST in the United States, and we are making efforts to try to pass along more information about nutrition and proper food. Perhaps that could be a lesson that gets passed along to our neighboring nation.

But then again, too many of the people who are looking for any excuse for Obama-bashing will probably dismiss this as frivolous, if not some dangerous interference on the part of the federal government into the lives of our chidren.

As though the “American Way” means we should let people become dangerously overweight and do nothing.

So what level are the insults at these days?

READING AROUND THE Internet (always a good way to find stupid, and anonymous wisecracks from people who seem determined to exercise their “constitutional right” to be ridiculous if they so choose), I have seen references to the fact that Michelle Obama is no longer a licensed attorney (trying to imply – without evidence – that she renounced her law license to avoid being disbarred), wisecracks that she will be able to buy a lot of cheap drugs (not the medicinal types), implications that she is miserable to the White House staff of servants, and even one wisecrack about Michelle having a big behind.

That is all on top of the people who want to think that the only topic of discussion between a United States and a Mexico official ought to be the scheduling of a departure time for all Latinos from the United States. Others question why we should want good relations with our neighboring nation.

As one nitwit put it on the website of the Chicago Sun-Times, “if she wants to build up relationships with Mexican citizens, just come to Chicago. We have hundreds of thousands of them here illegally.”

It’s true that about one of every six Chicago residents is of Mexican ethnic background (think about that next time people talk about the Irish or Polish character of Chicago), but you are deluded if you don’t realize that many are from families that have been here from generations – and may have been in this country longer than your family has.

INTELLECTUALLY, I CAN laugh all of this off as the rants of sore losers. But on a gut level, it bothers me that our society is still stuck in much of this partisan muck – which is truly what keeps us from advancing toward solutions on many of the problems that confront us.

The bottom-line statistic insofar as Michelle Obama’s travel schedule as first lady is that, while this is her first solo trip, she made nine trips to other countries during the past year accompanying her husband.

That puts her at a rate comparable to the past two first ladies – Laura Bush made 72 trips in her eight years as the presidential spouse, while Hillary R. Clinton made 80. So those of us who want to think that Michelle is some sort of shopping freak looking for any excuse to make a foreign trip really don’t have their view backed up with facts.

Perhaps the real problem is that some people have their own racial and ethnic hangups to work through. It’s just too bad that they’re so willing to put their ignorance on broad displaywhen they rant about Michelle doing Mexico City.

EDITOR’S NOTES: The sight of Michelle Obama representing the United States abroad (http://www.chicagotribune.com/news/politics/obama/sc-nw-michelle-obama-0412-20100410,0,1914219.story) is going to become (http://www.suntimes.com/news/sweet/2151180,CST-NWS-sweet11.article?plckCurrentPage=1&sid=sitelife.suntimes.com) a more common sight in coming years. So the partisan rants (http://www.dallasnews.com/sharedcontent/dws/news/world/stories/DN-diet_12int.ART.State.Edition2.4c56ac4.html) are likely to rise as well.

Will we get to hear Michelle Obama speak some Spanish? Former First Lady Jacqueline Kennedy showed herself (http://www.youtube.com/watch?v=xWnsJmBsvHU) on several occasions to be competent (http://www.firstladies.org/biographies/firstladies.aspx?biography=36) with the language.
Posted by Gregory Tejeda at 12:01 AM