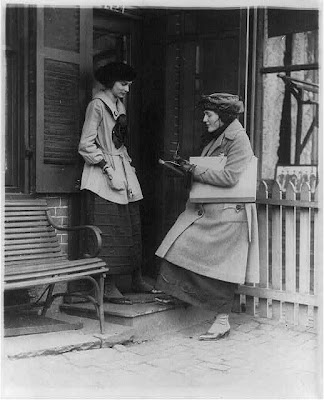 We soon will get the 21st Century equivalent of this 1920 Census Bureau worker doing a canvass to get a population count. Photograph provided by Library of Congress collection.

It is the date upon which you were supposed to base the factual data that you reported on the Census form you received in the mail earlier this month.

IT ALSO IS the date by which you are supposed to have put your form in the mail. But it seems that Chicagoans have been lax in terms of filling out their forms. The bureau on Tuesday reported that while half of U.S. residents have sent their forms back, only 36 percent of Chicago residents had done so.

Of course, it is not a universal problem. Go up and down the north lakefront, and you find neighborhoods with census tracts that exceed 50 percent, and where the bulk of the lakefront is in the 40 percents. For what it’s worth, the upscale South Loop neighborhood has census tracts with a 50 percent return rate.

The census tract that includes Wrigley Field only had 34 percent response to the count. Just out of curiosity, I had to look up the figure for the census tract around U.S. Cellular Field, where it turns out that 42 percent of residents who live near the White Sox’ stadium have bothered to send in their Census forms.

ON A MORE serious note, I couldn’t help but look up some of the Spanish-speaking neighborhoods of Chicago, on account of the fact that the Census Bureau spent significant amounts of money to promote the idea that Latinos should take a special interest in being included in the nation’s population count.

For it seems that the Latino neighborhoods of Chicago have lower-than-average return rates.

The South Chicago neighborhood (home of one of the city’s oldest Spanish-speaking communities) has census tracts in the 20s, and the census tract where my parents lived when I was born? It seems only 19 percent of people had bothered to put their form in the mail so it could be counted.

Not that others did any better. The Pilsen and Little Village neighborhoods that now contain the bulk of the Mexican ethnic population of this city have census tracts ranging from 19 percent to 26 percent, although there’s one tract on the far east edge of Pilsen where only 8 percent of people bothered to respond to the Census.

I GUESS THE Puerto Rican community centered around Humboldt Park did better, with census tracts in that neighborhood ranging from 28 percent to 36 percent. People living in the tract surrounding the park proper have responded at a 34 percent rate.

Heading back south, the University of Chicago campus intrigued me. It is split among four census tracts – with return rates ranging from 33 percent to 49 percent, with the percentage increasing the further east one goes along the Midway Plaisance.

In the same general neighborhood, I also checked out the one-time neighbors of Barack Obama. The census tract containing his home has a return rate of 43 percent.

Not that these percentages necessarily mean much.

THERE IS ONE census tract in the 10th Ward on the Far South Side. Stretching from 103rd Street to 130th Street and from the Bishop Ford Highway to just a little bit east of Torrence Avenue, it has a mass about six or seven times the size of most city-based census tracts (which can be as small as four square blocks).

That tract has a 38 percent return rate – right above the city average.

Yet anybody who knows that part of the city realizes that what we’re talking about is Lake Calumet, a portion of the Calumet River and the landfills that surround the area.

While I am aware of people who live near that area, I was not aware of a single soul who actually resided within that particular census tract Are we talking about 38 percent of the carp in the river who have managed to get themselves accounted for by the Census Bureau?

I AM SURE there are many more neighborhoods that have particular interest to certain individuals. But it amazes me that so many people in our area have their hang-ups about being acknowledged. It seems to be an urban thing. For I couldn’t help but notice the suburban counties surrounding Cook (which has a 43 percent return rate overall) all are doing better – with the highest rate being far northwest suburban McHenry County at 60 percent.

Which is why I’m wondering if Chicago is going to be the great unknown when it comes to those Census Bureau workers with their official shoulder bags and forms having to work their way through the streets trying to get to the people who couldn’t be bothered to fill out a form in the past few weeks.

I also can already hear in my mind the complaints from people who will insist that Chicago got undercounted, or that the suburbs are getting more than they deserve when it comes to political representation and government funding.

They’d be correct. But the bottom line is that people who couldn’t bother to be counted now probably don’t have a legitimate gripe a year or two from now if they get cheated out of something that could have been theirs.

EDITOR’S NOTES: Go ahead and look up your home census tract to see how many of your neighbors bothered (http://2010.census.gov/2010census/take10map/) to send in their forms.

I say let the conservative ideologues (http://www.nytimes.com/2010/03/31/us/31census.html) allow themselves to be undercounted. They’d be doing the bulk of society a favor in the long run.
Posted by Gregory Tejeda at 12:01 AM