Let’s be real about Wrigley's feel 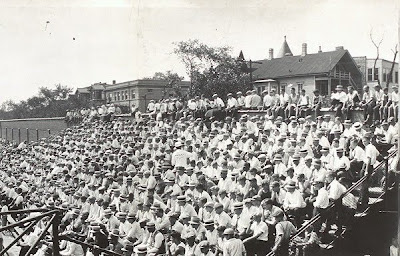 What would these Cubs fans from 1929 have thought of the fact that Budweiser or Toyota would someday use their seating location to advertise? Photograph provided by Library of Congress collection.

Reading the Internet commentary being spewed Wednesday about Wrigley Field and the desire by Toyota to install an advertising sign in the left-field bleachers is too ludicrous to take seriously – much like the Chicago Cubs themselves.

There are those people who are engaging in self-righteous rants about how such a sign desecrates a shrine of sorts to the Great Game of Baseball, and that something abhorrent is taking place.

PERSONALLY, I COULD care less about anything related to the Cubs. But I have to admit to not having much of a problem with this proposed advertising

billboard – which would actually be a giant Toyota logo mounted on posts so that it sort of hovers over the bleachers.

It also will obscure the view from the stands of a casino advertisement that has been painted onto the rooftop of one of those apartment buildings that has stood for decades directly across the street from the outfield bleachers.

My point is to say that this is a ballpark that already has been loaded with “advertising.” So the idea that this is somehow a new move is only true if one wants to take on a twisted definition of “new.”

Now I know I’m going to hear arguments from Cubs fans who will say their team’s ballpark does not have advertising signboards plastered on its outfield walls. Until recently, it didn’t have any ads on the wall behind home plate either.

IT COULD BE argued that there were no advertisements within Wrigley Field.

The advertisements that come to mind when I think of Wrigley Field (although some of them have since been replaced) are the old “Torco” sign beyond right field and the “Budweiser” rooftop beyond left – the one that now shills for the Horseshoe Casino in Hammond, Ind.

People want to think the fact that these signs were affixed to buildings with foundations outside the ballpark somehow makes them separate.

FOR THE ONE fact that fans of Wrigley Field (I’m not much of one, to tell you the truth) always like to claim as its prime virtue is that it has that big open-air view beyond the outfield walls that makes the upscale residential neighborhood of Lake View a part of the stadium’s atmosphere.

So as far as I’m concerned, all of those rooftop advertisements and other kitschy displays count when discussing the atmosphere in Wrigley Field. And I honestly can’t say that I think the proposed Toyota advertisement – or at least the mockup that I have seen – is any tackier than anything else that currently exists in or near Wrigley.

If anything, I like its positioning in left field because it partially obscures the view of the Horseshoe Casino ad, which in my mind’s eye will always shill for Budweiser (which paid for that prime visual spot for decades).

For those who think I’m living in the past, I’d argue it is Cubs fans who are still stuck by praising a ballpark named for a corporate interest that hasn’t owned the team for nearly three decades. “Wrigley” Field should always have a “Budweiser” ad beyond left field, even though both brands are, strictly speaking, history!

IT’S NOT THAT I like Budweiser. I thought it was a garish ad. But I find the thought of it preferable to the ad that now beckons to people to travel just a few blocks across State Line Road to throw away whatever little of their money they have remaining following a day at the ballpark.

Let the casino owners rant and rage at the thought that they paid a property owner good money to plug their business on his building, only to have Toyota come in and obscure some of their attention.

What also makes me laugh about this sanctimoneous trash talk is that people like to think Wrigley Field is a building that still carries the same character as the day it opened in 1914. Not even close.

NONE OF THOSE old ballparks from that era that people like to celebrate (while conveniently forgetting how much they were like Comiskey Park – cramped and uncomfortable and decaying to the point of seediness) were adverse to having advertising. 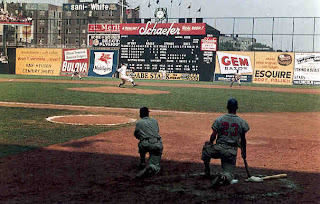 In some cases, those old ballparks are recalled because of their advertising signboards (Ebbets Field in Brooklyn with its “Hit Sign, Win Suit” ad, or the Schaefer beer logo with the letters that lit up for “hit” or “error”).

How do we know that the Toyota ad doesn’t have the potential to become iconic? Hit a home run that dings the sign, and somebody wins a free car – although knowing ballclub cheapness standards, it more likely would be, hit a home run and everybody wins a Toyota-logo keychain.

There might very well be the day when fans of the future will think it odd to envision Wrigley Field without that Toyota sign, and will consider the rhetoric of today to be downright absurd. Besides, now all the fans who sit in the right field bleachers will have another reason to hate on Toyota.