I hope nobody claims a “mandate”

ple, so to speak – to pursue a political agenda that happens to be in complete agreement with his own beliefs.

While I realize one of the perks of winning an election is that you get to pursue your own agenda, I think it is important to remember that there almost always were significant numbers of people who have their concerns, and likely will have to be “won over” to consider support.

THAT NOTION MAY be political heresy in today’s overly-partisan era, but I think it is all the more true when one looks at campaigns such as the now-complete Illinois gubernatorial primaries.

We learned on Friday that the Illinois State Board of Elections declared state Sen. Bill Brady, R-Bloomington, to be the winner of the seven-candidate Republican gubernatorial primary held last month.

There are those who point out the fact that the margin of victory was 0.25 percent of the overall number of ballots cast – making this one of Illinois’ most historically close elections. Gov. James R. Thompson defeating Democratic challenger Adlai E. Stevenson III in 1982 had an equally small margin of victory, percentagewise.

BUT TO ME, those “facts” are less important than one other statistic I derived from the State Board of Elections figures that were released on Friday.

That is the number of people across Illinois who chose a Republican Party primary ballot to vote for governor, and chose somebody other than either Brady or Dillard.

It comes to 59.496 percent of Republican voters didn’t want either of these guys – a percent close enough that it legitimately rounds off upward to 60 percent.

THREE OF EVERY five Republicans didn’t get what they wanted. And this comes from a political party whose base in recent years has become stubborn enough to revolt when they don’t get their way.

Now I’m not implying that such a revolt will happen come the Nov. 2 general election. I think many people who are ideologically inclined to vote Republican are going to be so eager to have someone of their political party as governor that they will vote for the “R” following Brady’s name.

But my point is to Brady and his backers, who had better remember that they didn’t accomplish some historic victory – even though some people will want to compare it to the Thompson/Stevenson election of 28 years ago.

That was a head-to-head electoral matchup, Brady versus the six dwarfs merely means there is no concensus amongst the party faithful.

BRADY, IF HE is to have a chance of overcoming the Democratic Party tendencies of the mass of Illinois’ urban population that leans toward that political party, has to remember the numbers of would-be GOP voters who didn’t want him.

He is going to have to make some adjustments, because the candidate of old that has run for elective office in McLean County, Ill., is not going to play statewide.

It didn’t during the primary. I couldn’t help but checking out DuPage County’s final totals for governor, since that west suburban county (the only one in Illinois aside from Cook that can claim more than 1 million residents) has always considered itself to be the heart of the modern-day Illinois Republican Party.

In the Land of DuPage, Brady got 5,246 votes – about one-quarter of the number of votes that county gave to Dillard (21,566) and Andrew McKenna (18,412). Heck, even Dan Proft, the conservative pundit whom nobody thought had a serious chance of winning the election, got more votes in DuPage (7,817) than did Brady.

IT’S NOT LIKE any of those guys managed to win in DuPage. If the county that likes to claim Red Gran 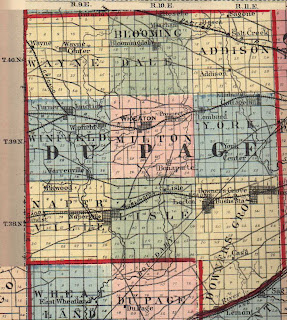 ge, Bob Woodward and John Belushi as its favorite sons had had its way, the Republican nominee for Illinois governor would be the county’s former state’s attorney, Jim Ryan (who got 27,408 votes, and 130,785 statewide).

Now none of this is truly new. It was clear from the unofficial tallies that we have known for the past month that the reason Brady was the likely winner of the primary was because he was the candidate of choice for Illinoisans who live outside of the Chicago or St. Louis metro east areas.

Brady racked up massive vote tallies in all the rural counties (in his home county, Brady got 10,260 votes, compared to 6,228 votes for everybody else combined) from voters who hate the idea of DuPage County reigning supreme over the GOP because it is too close to Chicago for their taste.

But he’s going to have to accept that he’s now running on a much larger stage, and has his own adaptations to make if he is to succeed.

IN SHORT, I’M sure there are some Republican partisans who think that a Brady campaign that consists of cheap shots against Pat Quinn, combined with a continued screeching of the name “Blagojevich!” is the ticket to victory.

For his sake, I hope he realizes that he also has to give the people of the state, including the 60 percent of Republicans who earlier this year had a vision for Illinois’ future that didn’t include either him or Dillard, a reason to vote for him.

Otherwise, Quinn and Democrats likely will clean up on him by constantly reminding us of morbid stuff, such as Brady’s bill that called for mass euthanasia for abandoned pets.

EDITOR’S NOTES: Does newly “coronated” Republican gubernatorial nominee Bill Brady realize that the political high road is the way to counter the likely Democratic attacks he will face in coming months, such as reminding us of this “letter to the editor” (http://www.pantagraph.com/news/opinion/mailbag/article_52e08ac2-27e5-11df-8b6d-001cc4c002e0.html) published in Brady’s hometown daily newspaper?

Kirk Dillard became reflective upon his electoral loss. Or at least that's the way his hometown (http://www.pioneerlocal.com/hinsdale/news/2085888,do-dillardloss-030510-s1.article) Hinsdale Doings newspaper prefers to perceive his concession statement Friday.
Posted by Gregory Tejeda at 12:01 AM