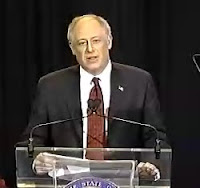 t Gov. Pat Quinn should have signed this bill (http://hosted.ap.org/dynamic/stories/I/IL_ILLINOIS_PRIMARY_ILOL-?SITE=ILBLO&SECTION=HOME&TEMPLATE=DEFAULTRY_ILOL-?SITE=ILBLO&SECTION=HOME&TEMPLATE=DEFAULT) into law yesterday, which would have been Election Day had state officials not messed around with the local elections back in ’08.

We can get back to a “normal” election cycle come 2012, and go back to mocking our Hoosier counterparts, who don’t have their primary elections this year until the late date of May 4.

I AM ALSO not the least bit surprised that a federal judge refused to consider re-scheduling the beginning of (http://hosted.ap.org/dynamic/stories/I/IL_BLAGOJEVICH_CORRUPTION_CA

Too many people seem to have a vested interest in this trial beginning June 3 (instead of after the Nov. 2 general election) for a judge to give in to a rescheduling, even though Blagojevich’s point that it might be worth waiting until after the Supreme Court of the United States rules on the validity of “honest services” charges might actually be one of the most logical things that ever came out of Milorod’s mouth.