When I was about 13, I had an “uncle” (actually, my mother’s uncle, if you want to nitpick) who went through a phase of his life where he rode motorcycles.

There were times when my uncle would let me ride the bike. But the one “hard-and-fast” rule I recall was that my Uncle Sphinx was a stickler about was that I wore a helmet when I was on the bike.

CONSIDERING THE POTENTIAL power of a motorcycle and the fact that it is an “open-air” ride, I would have been too scared to get on board otherwise. Anybody who claims otherwise is either stupid, or lying.

Which is why I have a problem with the fact that the Illinois Senate on Thursday not only rejected a measure that would have required anybody under 18 who gets on board a motorcycle to wear a helmet, but that some legislators actually think that this is an issue of personal freedom being impinged upon – as though requiring a helmet to be worn by a minor is somehow evidence of a government telling its people what to do.

“This is the U.S.A., isn’t it,” asked state Sen. Gary Forby, a Democrat from Benton in Southern Illinois. “We do have a freedom, we do have a choice, don’t we?” 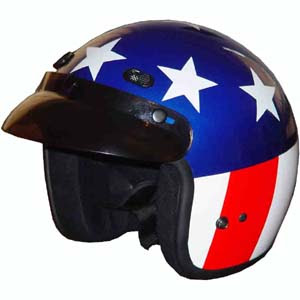 Would the opponents of helmet laws change their stance if this helmet were mandated for all motorcycle riders?

I wish he were somehow kidding, but the fact is that such logic occasionally comes up during legislative debate when some rural legislator takes offense to a measure sponsored by someone from Chicago proper.

IN THIS PARTICULAR case, the bill was sponsored by state Sen. Donne Trotter, D-Chicago, who when he’s not a legislator works as an administrator at Stroger Hospital. His co-sponsors include state Sens. Kwame Raoul and Jacqueline Collins, all three of whom are from Chicago’s South Side.

Which means that this measure got caught up in the same rhetorical speel that occurs whenever a gun-related measure comes up.

It becomes the Chicago legislators against the rest of the state, with the lead of the opposition taken up by the rural legislators. It becomes one of the few bills of the spring session where rural Illinois will be predominant.

If it sounds like I’m saying the regional partisanship of Illinois manages to overcome common sense when it comes to the issue, you’d be correct.

TROTTER TRIED TO cite his experience working at a hospital in saying that increased helmet use would reduce the number of injuries caused in motorcycle accidents, which he said would ultimately save taxpayer dollars that have to be spent to provide medical treatment in cases where someone isn’t insured.

Not that anybody wanted to hear a cost-saving or lesser-tax argument. Regionalism was at stake. Personal pride for where someone comes from, which means this measure goes nowhere this year.

What I don’t get about this particular issue is the fact that we have many such laws that require people to impose restrictions on their children for their own good. I don’t see how this differs.

Should I have claimed my personal freedoms were being impinged upon every time I used my car to give my niece (who is now 7) a ride, and I had to comply with the state laws requiring that I strap her into a proper car seat (which now sits unused in the trunk of my car)?

FOR THAT MATTER, should I claim that it is “un-American” for someone to require me to wear a seat belt within my own automobile, and that it constitutes an illegal search every time that police decide to pull one of their surprise inspections and have a cop come over and stick his head inside to make sure that all seat belts are properly fastened?

I’m not going to argue those points, because I realize that I would sound downright stupid if I seriously tried to make those arguments. I’d be one of those knuckleheads with no clue about public safety who would deserve to be the butt of those jokes told by some people whose punch line is along the lines of motorcycle riders getting what they deserve when they are crippled because they didn’t have enough sense to wear a helmet.

This time, however, I don’t feel like turning the Illinois Senate’s boneheaded vote (19 for, 32 against) into some sort of morbid joke. This one manages to get under my skin to the point where I have to wonder what is wrong with a segment of our society.

I realize that part of the greatness of the personal freedoms offered by our society includes a “right” to be wrong. But there’s something about this particular version of “wrong” because it involves minors to the point where I wonder if it ought to be constituted as “un-American” in and of itself.

EDITOR’S NOTES: The Illinois Senate gave us yet another moment that we can analyze for years to come (http://nwitimes.com/news/local/illinois/article_d905047d-de0c-5d52-968f-27dfa197daec.html) when trying to figure out what kind of blank space exists between their ears.

Do the hard-core opponents of helmet laws think that Washington state officials are offering up (http://www.wsp.wa.gov/traveler/docs/equipmt/helmet.pdf) subversive information by telling us which helmets provide better safety features?
Posted by Gregory Tejeda at 12:01 AM