Will The Times (N.Y., not London) make an impact on the Chicago news scene? 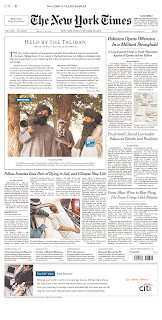 d by the New York Times as a way of strengthening that newspaper’s position as a national publication.

The Times last week began doing a San Francisco edition, of sorts. Basically, copies of the newspaper sold in the Bay Area will include a two-page spread twice a week that will be filled with stories of local interest.

TIMES OFFICIALS HAVE said that they also view Chicago as a market that could support such an effort, and that if the San Francisco “edition” does not turn out to be a complete flop financially, the Second City will be their second venture into the world of local journalism.

There are many ways to view this activity.

One is that it is ridiculous for the Times to think that “local” journalism is somehow going to be the publication’s economic savior, because it is something that it does not practice on its own home turf. People who want to know what is happening in the Bronx, Brooklyn or Queens need to read the Daily News on a regular basis. Even the New York Post gives a better account of the nitty-gritty of New York life.

The Times is the publication written and edited for New York residents who want a worldly view.

SO NOW, THE publication that doesn’t do the best coverage of its own back yard thinks it can come into our yard and snatch enough stories from the Sun-Times or Tribune that it would boost the circulation of their national edition in the Chicago area.

But now, having taken a cheap shot at the “grey lady,” I have to admit I try to read the Times on a regular basis. In part, it is because of their Chicago “coverage.” For the Times does maintain a bureau in our city, with a few reporters living here so they can cover the news throughout the Midwestern United States.

It is not unheard of to read stories in the Times about the political geeks, sorry athletes and other screw-ups who comprise the people that give Chicago its unique character.

Of course, when the Times comes in and covers something at City Hall or at the Statehouse in Springpatch, they usually come in after everybody else who is local has already tried to bleed the story dry of all its information.

OCCASIONALLY, THE TIMES can come up with an interesting factual tidbit that wasn’t known previously. But what they usually do is manage to do the one single write-up that puts an entire issue into perspective.

While the local press will be obsessed with advancing “the story” on a daily basis, the Times comes in when it is already advanced and tells “the world” what it all really means.

That can have its purpose (although, in all fairness, it was the competing Wall Street Journal that put the “Council Wars” of the mid-1980s into perspective when it came up with the defining phrase, “Beirut by the Lake.”)

But I would hope that the Times doesn’t think they can boost their circulation significantly in Chicago by merely giving us rewrites of what was already published in the local press. It won’t work.

NOW AS I understand, it won’t be the Times’ editorial staff that actually does the work of putting together a pair of pages on a pair of days each week.

They’re trying to work out partnerships in the Bay Area by which the actual “work” on those local pages will be done by public broadcasting news types, along with academic types from the University of California at Berkeley.

Does this mean we have the potential to get newspaper pages put together by WTTW, along with those earnest (but extremely inexperienced) students of Northwestern University? If they had to go that route, I'd just as soon see them pair up with Loyola University, which now has on its faculty one-time City News Bureau managing editor Paul Zimbrakos -- who I'm sure could browbeat reporter-types into coming up with "real" news.

I’d like to think that image of academia in daily journalism is just too ridiculous to be taken seriously. But I’m also realistic enough to know that the bottom-line of this project is to boost advertising revenue, not to necessarily improve the editorial quality of the newspaper as a whole.

WHAT’S THE POINT – in the minds of too many newspaper executives – of coming up with more ad revenue if you’re just going to spend it on payroll and expenses of producing stories? There’s a company as a whole whose stock value needs to be bolstered.

Yes, I’m a tad cynical about this whole project.

If improved Chicago coverage were all that significant to bolstering the quality of the newspaper, it likely is something that would have been done years ago.

This sounds, to me, like the thoughts of an advertising executive who sees that the potential sales to businesses in the New York metropolitan area have “maxed out,” so they’re trying to figure out how they can snatch a share of the advertising revenue elsewhere.

HEARING THAT THE Times is now in San Francisco creates in my mind the image of an easterner headed west to pan for gold, more than a century-and-a-half after the Gold Rush of 1849.

I guess we’ll find out if “there’s gold in our hills” if the Times then doubles back sometime in the near future and decides to descend on our streets.

So here’s a quickie local lesson for the potential New York newcomers – Madison is a street, not an avenue.

Judge it for yourself. I’ll determine its relevance by the quality of stories it can unearth, while (http://www.niemanlab.org/2009/10/what-the-nyts-bay-area-report-looks-like-in-print/) some executives in New York will judge its success by the number of local advertisers it picks up.
Posted by Gregory Tejeda at 12:01 AM