Columbus Day not the same as our youth

I recall a moment that took place more than a decade ago – I was chatting with a person who worked on the Illinois state government payroll and we were joking about the concept that while the rest of the world worked, she would have the day off.

It was early October of that year, and Columbus Day was just a couple of days away. “It’s the first time I’ve had Columbus Day off since I was in grammar school,” she told me.

NOW, IN CHICAGO proper at least, even that’s not true.

For it turns out that the Chicago Public Schools aren’t going to waste one of their “holidays” to celebrate the explorer hired by the Spaniards to go to India (but managed to stumble his way into Puerto Rico instead).

His “Indians” were actually “Boricuans.” But it made for a nice story to tell grade school children about how Cristobal Colon “discovered” a whole new continent. 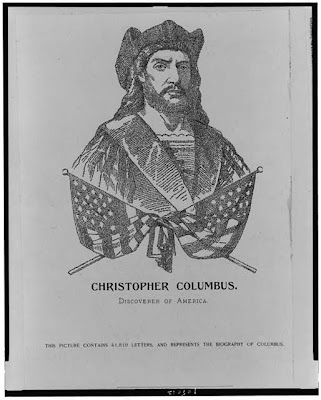 Who today would give Christopher Columbus such a noble image? Illustration provided by the Library of Congress Collection.

His “discovery” was one of the stupid accidents of history that likely would have happened eventually (it was just a matter of time before those Eurocentric Europeans discovered the existence of two more continents on Planet Earth).

WHEN ONE CONSIDERS the number of other holidays that vie for the public’s attention, perhaps it is fitting that Columbus Day be taken down a notch or two to the level of a lesser holiday.

Put it up there with Flag Day, which to my mindset is about where it belongs.

So I’m not bothered by the fact that Chicago schoolchildren (or at least those whose parents don’t make a point of sending them to the Catholic schools maintained by the Chicago Archdiocese) won’t be getting a day off to sit around the house watching cartoons or roaming the streets in search of something, anything to fill a day’s worth of downtime.

There will be enough private school kids and suburban youths (including my nephews and nieces) who will get the day off, although I don’t think the day will be anything resembling an educational experience – which is what proponents of keeping the holiday will claim is its purpose.

NOW I PROBABLY should state that while I do agree there is some element of truth to those people who would argue that Columbus was just another conquistador in search of riches whose actions wound up causing harm to the indigenous peoples already here (Hernan Cortes meeting up with the Aztecs in what is now modern-day Mexico would be a similar example), I’m not inclined to get as worked up over the issue.

I think the people who start making comparisons to Adolf Hitler or going out of their way to write sentences that pair up the words “Columbus” and “genocide” are getting a bit overworked. Did they forget to take their medication this morning?

Just about anyone who takes on some project on a grand scale has an ugly side that can be exaggerated into pure evil. It also is true that many of those grand-scale projects were flukes, as the person likely was in search of something much less moralistic.

Are we better off thinking of Columbus as a seeker of riches who made the trip in the first place because he was paid very well by the Spanish royal family? Probably.

ARE WE BETTER off trying to ignore outright the man who was one of the first contacts between indigenous American (even though they never would have thought to use that label for themselves) and European cultures?

No. Because that would be just a gross a rewrite of the history books as those people who want to view him as some sort of saintly character.

So what we in Chicago will get this year is what has become the typical ethnic holiday parade – the one that starts at Balbo Street and works its way up Columbus Drive to Monroe Street.

At least this is the proper holiday to have a parade there. The Columbus Day parade on Columbus Drive sounds cute – unlike the St. Patrick’s Day parade that always leads to silly jokes about Cristobal being renamed “O’Columbus” for the day to make him an honorary Irishman.

JUST FOR THE record, I’m not going, nor do I plan to watch any of it on television. The only times I have seen these parades are when I had to work as a reporter-type person and cover them.

Otherwise, they just don’t do much for me. Because in a sense, the parade itself will become the generic ethnicfest that all of the downtown Chicago holiday parades have become in recent years.

How else to explain the fact that the Mexican Folkloric Dancers will be among the many groups participating in the event? You’d think my ethnic brethren would be aligned with those Puerto Rican activists who want to mourn the arrival of Columbus on the Caribbean island.

Except that we’re too busy working to get all hot and bothered about this cause. In fact, there are times I think only the Italians are truly concerned (and I don’t just say this because of the episode of “The Sopranos” where Tony’s mob administered a serious beat-down to native American activists) about this issue.

WHICH IS PROBABLY fitting, since the fact that Italians like to claim Columbus as one of their own even though the concept of Italy as a single nation united didn’t exist until some 350-plus years after his death.

Would Columbus himself (born in Genoa in 1451) have thought such a characterization accurate? It is the question I always wonder when I think of the holiday, not about whether Columbus was a genocidal maniac?

EDITOR’S NOTE: For those of you who have no desire to see yet another downtown Chicago parade (http://abclocal.go.com/wls/story?section=resources/inside_station/station_info&id=7051611) on television, avoid WLS-TV (Channel 7) at all costs between noon and 3 p.m. Don’t say you weren’t warned.
Posted by Gregory Tejeda at 12:01 AM