Everybody – it seems – wants to be the lieutenant governor for Illinois

It is the job that some people joke only has one requirement – a pulse.

It is the political post that cranks argue ought to be abolished.

YET IT ALSO is the position that has at least seven people desiring it. We’re talking, of course, about the position of lieutenant governor for Illinois.

Three Democrats and four Republicans filed nominating petitions Monday seeking a ballot spot for the primaries to be held Feb. 2.

As is the case with all the elections, the Democratic side has the bigger, more recognizable names (at least among people who follow electoral politics on a regular basis). It wouldn’t surprise me if typical people have never heard of any of the seven.

Republicans are banking on the fact that voter displeasure with electoral officials these days will result in an automatic vote against Democratic candidates – on account they have dominated state government for the past six years. 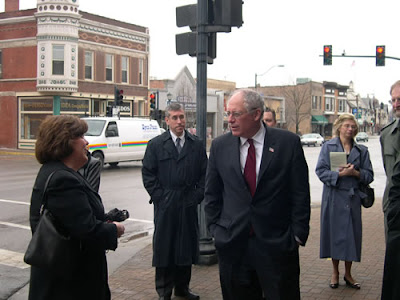 Who would ever have thought the day would come that political people would hope to follow the path of Pat Quinn? Photograph provided by State of Illinois.

THERE STILL COULD be more candidates cropping up, since the filing period with the Illinois State Board of Elections runs through Nov. 2. But even with seven, that will be a large field for a job that some people like to joke has only one official duty – calling the governor first thing every morning to ensure that he’s still breathing.

For the record, the candidates thus far shape up as a brawl in the Illinois Senate versus a scrap in rural Illinois.

The Democratic primary is the state Senate brawl. The three people wanting the Democratic party’s nomination for lieutenant governor are all state senators from the Chicago area – Rickey Hendon and Art Turner, both of the West Side, and Terry Link of the far north suburbs near the Illinois/Wisconsin state line.

By comparison, the Republican candidates for lieutenant governor are a batch of rural Illinois politicos, that is if one stretches the definition of “rural Illinois” to include Springfield and Don Tracy.

I KNOW RESIDENTS of the Illinois capital city will object to that characterization, even though the two-thirds of the state’s population that lives in the Chicago area will think it all too appropriate.

But the other three GOP would-be lieutenant governors are all full-fledged residents of the southern half of Illinois – Jason Plummer of Edwardsville, Randy White of Hamilton and Brad Cole, who happens to be mayor of Carbondale.

What makes lieutenant governor so attractive?

It is the fact that whichever two candidates manage to survive the primary season will have the easiest time of any candidates seeking an Illinois statewide government post.

IT IS THE quirk of Illinois law that lieutenant governor candidates run separately during the primary season, but then are paired with the party’s gubernatorial nominee for the general election.

Winning the primary means latching onto a campaign and knowing that unless one does something so blatantly stupid as to call attention to their ignorance, their involvement will be secondary to that of the candidates for governor.

And if one happens to be affiliated with the winning gubernatorial candidate, then they get a four-year post that consists of being on-call for whatever duties the governor is willing to delegate.

It can make an aggressive lieutenant governor capable of picking out an issue or two to focus their attention on, becoming a spokesman of sorts for whatever they want to consider a worthy cause.

I’M SURE ALL seven men also learned from watching the situation of Pat Quinn, who served as lieutenant governor for roughly six years before being in the right place at the right time when the General Assembly went ahead and impeached (then convicted) Rod Blagojevich.

The man got to be governor, and has some Democrats seriously pressing for him to be elected to a full four-year term in his own right, even though Quinn spent nearly three decades being a pain in the buttocks to political people with his goo-goo rhetoric on many issues.

In short, being lieutenant governor is a shot at the big spot when all one has to do is languish in the background without doing anything stupid.

Don’t think that the candidates themselves don’t realize that.

THE DEMOCRATIC FIELD has three veteran senators, each of which will try to claim they somehow are worthy of being in the right spot – should something happen to a future Democratic governor.

Will we vote for Link, a 13-year state Senator who was one of Barack Obama’s closer allies when the two were together in the Legislature, or will it be Hendon, whose outspoken nature will persuade some urban residents that he is the only man willing to stick up for the “little people.”

Or will it be Turner, a veteran African-American legislator, for those who think that Hendon’s outspoken nature is an embarrassment to the people of Illinois, and particularly to the West Side legislative district he has represented for nearly two full decades.

Hendon’s candidacy has its own quirks, since he also filed nominating petitions to run for the seat in Congress currently held by Rep. Danny Davis, D-Ill. That is the office Hendon really wants, but if Davis decides this week to seek re-election, then he will withdraw and go for lieutenant governor.

FOR THOSE WHO think that the “solution” is to dump Democrats, will they be inclined to back Cole, finding some comfort in his local government experience? Or will they prefer Tracy, an attorney, or Plummer, a small business owner, both of whom portray themselves as non-political people with “real life” experience.

Or will we get White, who ran a write-in campaign for lieutenant governor in 2006 on the grounds that none of the candidates on the ballot had views that were “in alignment with Biblical principles.”

In short, it’s going to be a feisty fight for an office some people like to say is about absolutely nothing.

EDITOR’S NOTES: Will we someday have Lt. Gov. (or Rep.) “Hollywood” Hendon, or will (http://votesmart.org/bio.php?can_id=BS024370) we have state Sen. Hendon seeking favors from Lt. Gov. Link (http://www.link30.org/) or Turner (http://www.turnerforillinois.com/).

The “Party of Lincoln” has a four-way going (http://www.teambrad.com/) when it comes (http://jasonplummer.com/) to people (http://www.bhslaw.com/Bio/DonaldTracy.asp) who want to be (http://www.randy4ltgov.com/index.html) “second-in-command” for Illinois government.