Once again, we can see why it is a mistake to automatically assume the Supreme Court of the United States is some ideological mac hine that will automatically rule to uphold one conservative cause or another.

There are those people in the battle over firearms who are convinced that the high court will eventually shoot down the ban on firearms ownership within the city of Chicago, claiming city government has no authority to impose such a law.

NOW I’M NOT saying they won’t. The high court, after all, does have a 5-4 majority of justices who consider themselves ideologically conservative on many of the social issues of the day. And they do tend to think that the proper interpretation of the U.S. Constitution will produce a lot of rulings of favor to the social conservatives of our society.

But we got to see Monday some evidence that only a fool tries to predict how a court will react or even how a conservative will react.

It was on Monday that the high court chose to take no action on an appeal of a case involving Illinois’ specialized license plates. 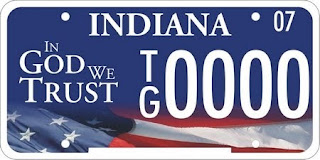 plate telling people to “Choose Life.” They say proceeds raised by the Illinois Secretary of State’s office for the plate would be donated to a group that tries to encourage women who don’t want their yet-to-be-born babies to put them up for adoption.

THE SOCIAL CONSERVATIVES got their kicks from this case when, last year, a federal judge ruled that Illinois was wrong for denying the group the ability to have this license plate.

He tried arguing that the state was interfering with a person’s right to use their automobile’s license plate to express their view on abortion.

Of course, that ruling got struck down late last year by the appeals court in Chicago, as a three-judge panel ruled (correctly, in my opinion) that the license plate by itself was not about speech.

The high court’s lack of action on Monday lets that ruling remain, although court watchers will be quick to remind us that such lack of action does not constitute an automatic endorsement.

NO MATTER. IT means the three-judge panel’s ruling remains the law.

That panel noted that since none of the dozens of specialty plates sold by Illinois motorists who can’t just settle for a standard issue plate to identify their automobile deal with the issue of abortion, it could be said that the state is not taking sides.

In fact, that has been the justification for allowing people to purchase license plates to identify their collegiate alma mater, but not for abortion – they’d rather not get involved in this issue that will tick people off, no matter what.

Because letting such a message on a license plate issued by a state government does wind up constituting an endorsement, of sorts, of that viewpoint.

IS THIS WHOLE issue of creating a license plate just a tactic by anti-abortion activists to force the state to endorse their viewpoint?

That may be a little bit strong, but it definitely comes off as forcing other people (motorists and pedestrians) to have to view one’s viewpoint, which in my book constitutes trying to use the state’s “muscle” to shove that abortion view down our collective throats.

It comes off similar to the situation in Indiana, where there were court cases until last year with regards to that state’s standard issue license plate – the one that reads “In God We Trust.”

The courts ultimately struck down the lawsuits in that case that tried to argue that such a message should constitute a specialty license plate that people should have to pay extra money for if they really want it on their cars that badly.

I’M SURE THERE will be some Illinois residents who live in the areas along the state’s border with Indiana who will wonder why their state can’t have some sort of “Christian” message (although I have always thought the whole anti-abortion argument to be so anti-mother as to be un-Christian) on license plates, while their Indiana neighbors can.

What I’d argue is that I wish we could do away with the concept of specialty license plates altogether.

The fact is that the only reason to have a license plate on a car to begin with is to make it easier for law enforcement types to be able to identify a moving vehicle.

If anything, having license plates of multiple designs and colors can add to the confusion in a case where a cop does have a legitimate need to know immediately who ought to be in a particular car.

I KNOW THROUGHOUT the years I have heard many police officers grumble about having to keep track of what constitutes a legitimate license plate and what does not. I’m sympathetic to their view.

So in the sense that the Supreme Court’s lack of action gives us one less type of license plate in Illinois, I’d argue it’s a good move. Now if only they could do something to get rid of some of these other plate designs, then we’d be better off as a society.