Nerves can relax by High Noon 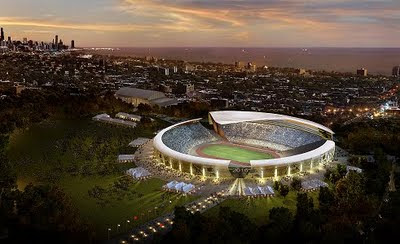 Some people are expected to gather Friday at the site of this proposed Olympic Stadium in Washington Park so they can feel like they were "there" when they learned where the 2016 summer Olympics were to be held. Illustration provided by www.Chicago2016.org.

Today’s the day we learn whether Chicago will be the focus of intense activity to try to stage an Olympiad in the Second City (with all the accompanying stories of people trying to use their political influence to gain themselves favors from the games’ presence) come 2016.

By Noon, it will be over.

EITHER THE PEOPLE who are looking to get more rich and powerful from the games being held in Chicago will be celebrating their good fortune, or we’ll be hearing the civic spin that we really didn’t want those games and are probably better off without them.

Even though that will be a total fib.

What amazes me as I write this in the hours leading up to the announcement by International Olympic Committee officials as to where the summer games for 2016 will be held is the degree to which people are trying to recreate the suspense of what is happening in Copenhagen all throughout the Chicago area.

Chicago has its delegation in Denmark led by Mayor Richard M. Daley, and the first family (including lifelong Chicagoan and first lady Michelle Obama) are all there to try to twist some arms so that an Olympiad would be held in the United States – the first summer games to be held here since 1996 in Atlanta.

THOSE PEOPLE WILL feel legitimate nerve wracking activity as they watch the IOC do their countdown – literally taking the list of four finalist cities down to three, then two, before finally picking the winner at sometime about 11:30 a.m. (that’s Chicago-time).

This whole process will take place during our morning hours, which is why various groups are trying to stage events meant to make it possible for everybody to feel like they were somewhere unique at the moment the decision was made whether or not to let Chicago represent the United States to the world.

People can take their pick of standing in the shadows of the Picasso statue at the Daley Center or under a giant tent at Washington Park – the site of what would be the actual Olympic Stadium to be built, if the city actually is awarded the games.

For those of you who don’t want to venture to either site, there are attempts to create events elsewhere.

DOWNTOWN NAPERVILLE WILL hold a street festival, while Condordia College in River Forest will have a rally on campus. The Chicago Southland Convention and Visitors Bureau is having an event for municipal officials throughout the area to be held at Toyota Park – the Bridgeview-based stadium used by the Chicago Fire professional soccer team.

I think my favorite is the one to be held in Joliet at Silver Cross Field, the stadium used by the Joliet Jackhammers professional baseball team. They’re letting people into the stadium for free so they can sit in the stands and watch the IOC announcement on giant video screens.

They’re also making sure their concession stands are open, so that people can buy all the cheap (but overpriced) ballpark junk food they could desire. So the ball club makes a few bucks a couple of weeks after the end of the Northern League season.

Since I do some work as a reporter-type, I may very well wind up attending one of these events to talk to people to see why they feel so enthusiastic about the Olympic Games that they felt the need to pretend they were “there” at the moment the announcement was made.

LET’S BE REAL. The only ones who were truly “there” were the ones who caught a flight to Copenhagen.

To me, anywhere else would have a touch of phoniness to it.

But some people, I guess, have the energy and time to do these things, although it reminds me of the one-time Chicago Cubs manager Lee Elia, who in an obscenity-laced diatribe about the team’s fans, said something along the lines of, “85 percent of the world works, the rest of them come here.”

Is that the case with these Olympic fans? Are there really people out there who have enough time on their hands to give up an entire morning, just to pretend they were there? Or could it be that the presence of the Olympics will create jobs for some of these people?

ALL I KNOW is that I am going to feel relief after Friday. Because we will know for sure whether this event is coming to Chicago. As I have written before, I think the general concept of a Chicago-based Olympiad is good. I could see benefits coming to those of us who actually live here.

But after all the rhetoric we have had to endure in recent years, I just want to it be over. If Chicago gets the games, we can move on to the talk of actually planning the things out and get away from cheap rhetoric – of which we have heard much from both sides of the issue.

In short, I’m at the point right now where I feel about the Olympics the same way I feel about the Major League Baseball regular season. After 159 games, I’m ready to see it come to an end on Sunday.

But that’s another story.