I don’t have a clue who is going to prevail in the special primary elections to be held Tuesday that will allow residents of Northwest Side neighborhoods and surrounding suburbs to start the process of replacing former Rep. Rahm Emanuel.

The Illinois 5th Congressional District has sat vacant for the past two months while Emanuel has served as White House chief of staff. That has caused the nation’s political geeks to focus so much attention on our city to figure out who gets to be Rahm’s successor in Congress.

YET I CAN’T help but wonder if this is a campaign where there will be more people paying attention outside the district, than within it.

Chicago Board of Election Commissioners officials won’t offer predictions about voter turnout, but the Cook County clerk’s office (which will oversee election operations in the small suburban sliver of the district) notes that only about 300 people bothered to use the early voter centers to cast their ballots prior to Election Day.

That doesn’t exactly sound like a campaign that is getting the populace all worked up. It is a far cry from last year’s general election for president, where there was evidence that many people who used the early voter centers did so because they were excited about the chance to vote for (or against) Obama. 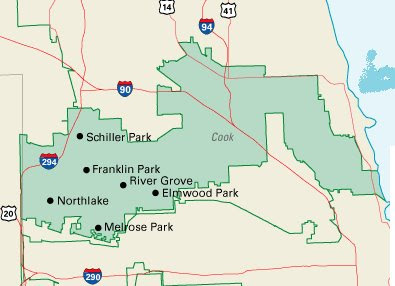 For everybody outside these boundaries, Tuesday is just another weekday. Map provided by http://www.nationalatlas.gov/.

There’s a good chance that Tuesday will come and go, and many people living in the Illinois 5th will not even realize that they should have bothered to go to the polling place to cast a ballot.

NOW I’M NOT about to start berating the potential electorate. After all, this is a special election – one that couldn’t even be held in conjunction with the standard primary election day (which for every other elective office up for grabs in the area was Tuesday of last week).

Then again, since the winner of Tuesday’s special Democratic primary is the odds-on favorite to win the general election, maybe it won’t – particularly since there truly is so little difference between the dozen Democrats who dream of winning the political lottery (a seat in the House of Representatives) that there shouldn’t be much difficulty in getting the various factions to unite behind Tuesday night’s winner.

But who that winner will be, I don’t know. It truly is going to center on how many (really, how few) people bother to show up at the polling places.

LOW VOTER TURNOUT means that fewer votes will be needed in order to win. And considering that there are so many candidates in each of the three primaries being held Tuesday, that means the percentage needed to win could be potentially low.

We could literally get the sight on Tuesday of a Democratic nominee for Congress who wins with about 15 percent of the total vote.

With that factor, a lot of the conventional wisdom about this campaign deserves to get flushed down the toilet.

How relevant is it that the remains of Chicago’s once-strong Polish community is concentrated in this congressional district? If it is, then no-name Victor Forys (and his strong ethnic-influenced campaign tactics) could very well have a chance.

BUT WHAT IF the women band together? Then we could get state Rep. Sara Feigenholtz on her way from Springfield to Washington.

Want this to become a battle of political regulars? Then state Rep. John Fritchey, Cook County Board member Mike Quigley or Ald. Patrick O’Connor could stand a chance.

Or perhaps there’s a chance that all five of these people could wind up splitting the vote so thoroughly that labor attorney Tom Geoghegan stands a chance of getting a large enough share of the vote to win a Democratic primary.

Or maybe there will be some cosmic fluke (like in 1986 when Aurelia Pucinski and George Sangmeister lost to Janice Hart and Mark Fairchild) of politics that results in someone else having a chance.

IN FACT, ABOUT the only prediction I feel confident making about Tuesday’s elections is that whoever wins the Green Party primary won’t matter in the least come April 7.

Part of the problem in getting people interested enough to care about this election is that it is a “special” election being held on a separate date from other political activity. I’m not surprised that real people feel they have more important things to worry about than every attack ad issued by Feigenholtz or Fritchey or whoever.

In fact, part of the reason I am bothered by the people who are determined to dump Roland Burris and have a special election this year to pick a new U.S. senator from Illinois is that I can see the exact same result occurring.

The “special” nature of the election could confuse people and diminish its interest. I would not want anyone getting the advantage of incumbency because they were able to win a political crapshoot – particularly since the real election for that particular office will be held as soon as next year.

BUT HAVING SOMEONE pick a replacement for Rahm is not an option. Only statewide offices come to the attention of the governor – largely because trying to coordinate special elections for all 102 Illinois counties would be a headache.

So on Tuesday, a few people in neighborhoods such as Lake View, Roscoe Village and Sauganash, along with some select suburbs like Schiller Park and River Grove, will turn out to cast ballots to see who gets to stay in the race to represent the Illinois 5th Congressional District.

The end result will be that in just over a month, there will be a new member of Congress who likely will have the dubious distinction of saying that fewer than 20 percent of the primary voters of his/her district truly cared enough to vote for them.