A DAY IN THE LIFE (of Chicago): Leave it to Chicago Cubs to go “wrong” way

When it comes to professional baseball and the spring training camps they operate every March, there has been a definite trend. Ball clubs that historically took up shop in a Florida city have moved west – to Arizona.

It has reached the point where the teams of the American and National leagues literally are split equally between the Grapefruit League (Florida) and the Cactus League (Arizona).

OUR VERY OWN Chicago White Sox were among that trend – leaving Sarasota, Fla., for Tuscon, Ariz., a decade ago, then shifting to a new stadium and training camp in the Phoenix suburb of Glendale (home of the almost Super Bowl champion Arizona Cardinals).

Even teams like the Los Angeles Dodgers, which had historic ties to having a training camp in Vero Beach, Fla., joined the trend – as they also share a training camp with the White Sox.

Yet now, the Chicago Cubs – a ball club that has long been in Arizona and historically has sought the southwestern U.S. such as Scottsdale, Ariz., and Catalina Island near Los Angeles for its training camps – is looking to the east when it comes to establishing a new springtime home. 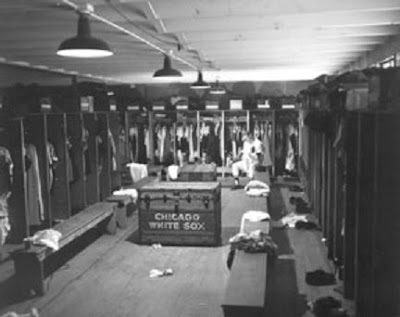 Sarasota's Payne Park was once the springtime home of the Chicago White Sox. Would the Cubs really "desecrate" that city in the minds of older Sox fans with their presence? Or is this just a negotiating ploy? Photograph provided by Sarasota County History Center.

It turns out the Cubs are talking with a Florida city about the possibility of relocating there as of 2013. In a sense of irony, they are looking at Sarasota, which would mean they literally would set up shop in the city once used by the White Sox – unless the Cubs can con Sarasota into building them a new facility (which is always a possibility).

ADMITTEDLY, THE CUBS could just be engaged in a negotiating ploy to pressure their current spring training city of Mesa, Ariz., to come up with better facilities. Team officials admit they like the conditions of HoHoKam Park, but have their problems with the other athletic facilities used by the Cubs and their minor league affiliates for training camp.

But it reminds me of a film by the late actor John Candy (who always bragged during his life of being a Cubs fan). One of his final films was the cowboy comedy “Wagons East!” about western folk who decided to go to the Atlantic coast in search of a better life.

All I know is that the next time anyone tries to bring up the existence of U.S. Cellular Field (http://www.msnbc.msn.com/id/29767575/) as evidence the White Sox extorted Illinois for a new stadium, we can now say that the Cubs are just as capable of playing political hardball for new facilities. In fact, just about every sports team (with the possible exception of the Florida Marlins) is good at extorting government.

What else was notable in the world, as perceived from the shores of Lake Michigan?

AL SANCHEZ – PUBLIC SERVANT OR PUBLIC ENEMY?: A part of me has always questioned the vigilance with which some people wanted to monitor the Hispanic Democratic Organization.

The group that on the surface promotes Latino political empowerment in Chicago was really about promoting Latinos who were willing to be supportive of the electoral interests of Richard M. Daley. And I don’t doubt that the criminal charges pending against group members have some basis in reality.

Yet a part of me can’t help but sense that people who were always willing to look the other way at political corruption in Chicago are now willing to crack down on Latinos getting caught, because they’d just as soon drive them out altogether – even though Chicago is a city with a Latino population of 26 percent, one could argue that Latinos are not a large enough presence at City Hall.

So is HDO head and former Streets and Sanitation commissioner Al Sanchez a benevolent (http://www.chicagotribune.com/news/local/chi-sanchez-trial-20mar19,0,291060.story) Latino politico (as his defense attorneys argued this week) or just a corrupt political hack? The truth is probably somewhere in the middle.

HOW DARE THEY REPAVE THE STREETS: I’m starting to wonder if the reason some people are adamantly opposed to having the 2016 Olympic Games in Chicago is because they know they will not have much of a say in dictating where improvements are made.

The City Council became a battleground this week because of aldermen who were upset (http://www.suntimes.com/news/cityhall/1485873,w-streets-olympic-repave-031909.article) about a recent repaving of streets surrounding Washington Park – the South Side site being considered for an Olympic Stadium

International Olympics Committee officials will be in Chicago in early April, and the critics say city officials rushed the repavement to make the site look good, even though there are other streets on the South Side that could have used repairs just as badly.

I have always thought the benefit of an Olympics in Chicago is that it could pressure city officials to make long overdue improvements, even if the motivation for those improvements was to make the city look good for outsiders, rather than to benefit residents. But now, these aldermen are going to realize that the traditional right to veto any projects in their ward is going to be trampled on, if an international project like the Olympic Games were to come to our city. Personally, I don’t have a problem with that.

SIX BITS FOR THE BRIGHT ONE: Ten more days until one will have to cough up an extra quarter to buy a copy of the Chicago Sun-Times.

As is usual when it comes to the business news of a newspaper, the competition reported it first. The Chicago Tribune let us read all about it Thursday that the paper now costing $0.50 will go up in price as of March 30.

I couldn’t help but notice that the Tribune told us that it was just the Sun-Times raising its price – not any of the suburban publications that the company also owns. Yet most of those papers were already charging $0.75 on weekdays for a copy of the paper (http://newsblogs.chicagotribune.com/towerticker/2009/03/chicago-suntimes-raising-singlecopy-price-to-75-cents.html), as was the Tribune.

Some news readers will claim that the Sun-Times ought not be charging the same price as the Tribune. Yet I can’t help but wonder if this will be the justification for the Trib to suddenly decide its newsstand price ought to go up – at least to $1 per copy. For the bulk of the past 18 years, the Trib has cost more than the Times (first $0.50 vs. $0.35, then $0.75 vs $0.50.