5 days of being Irish? Only in Chicago

Perhaps it’s the timing of the holiday festivities this year, but I feel like we Chicagoans are in the midst of a five-day holiday weekend running through Tuesday.

That day is the actual calendar date of St. Patrick’s Day, which may have some significant cultural history to it but has become little more than an Irish ethnic pride day – one in which everybody likes to claim they have a wee bit o’ Ireland in their blood.

BUT BECAUSE IT is easier for the city to have official festivities on the weekend, we’re getting the actual St. Patrick’s Day parade on Saturday.

And in the Beverly neighborhood on Sunday, we’ll get the South Side Irish version of a parade.

So people literally could begin their Irish-inspired celebrating Friday night after work, carry it into the official downtown parade today, then spill over into a drive to the South Side for a third day of festivities. 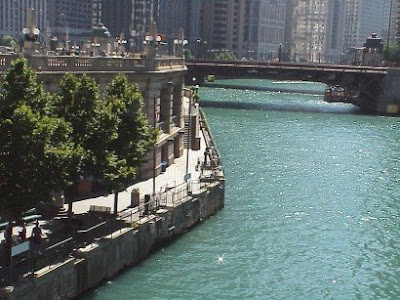 That river looks green to me, and it wasn't even St. Patrick's Day. Photograph provided by State of Illinois.

But those people who are determined to carry out their celebrations as much as possible, they will also insist on partying on the holiday proper on Tuesday. And why let a holiday-less day on Monday go by without some intoxicating behavior.

THE THOUGHT OF such a schedule strikes me as mind numbing, primarily because I’m not 19 anymore. I don’t think I’m physically up to such consumption of Guinness or any brand of beer with a green food coloring added for the holiday.

So maybe I’ll be the guy with a look of disgust on my face as I watch people around me this weekend, while going out of my way to wear nothing that resembles the color green. Then again, I’ll also be the one on May 5 having fits that the historic holiday of Cinco de Mayo has turned into little more than a Mexican version of St. Patrick’s Day.

But many of my Chicago colleagues will want to be in on the fun. In fact, some suburbs already have had holiday parades – giving people a chance to “rehearse,” so to speak, their Irish-inspired consumption of intoxicating beverages.

There will be the crowds that work their way downtown Saturday for the parade down Columbus Drive, which I still think is a letdown compared to the old days when the parade literally cut through the Loop.

CHECK OUT A copy of the Harrison Ford film “The Fugitive,” which included scenes that were filmed during the real Chicago St. Patrick’s Day parade of 1993 – and even includes a cameo of our now-U.S. senator, Roland Burris.

We’ll get to hear the Shannon Rovers play once again on Saturday, before they take off for the District of Columbia to perform in festivities to be held Tuesday at the White House. Those are just more of the benefits Chicago will continue to reap from having President Barack O’Bama (groan!) in office.

The holiday is even the inspiration for what may very well be one of McDonald’s most overrated concoctions of all time – the Shamrock Shake. I have never tasted anything even remotely mint-y, or even remotely delicious, about it.

Yet there are people I have met who swear they must have one of those mid-March McDonald’s milkshakes as part of their holiday tradition. Then again, these are the same people who think the McRib sandwich is some sort of delicacy, rather than just ground meat made from the disgusting parts of the pig.

BUT THEN, THERE’S the Second City tradition that I always find to be the most ridiculous aspect of a Chicago-style St. Patrick’s Day – the idea that the city dyes the river green.

After having an orange powder dumped into the water, the river takes on a kelly-green tone for a couple of hours, before reverting back to its natural dirt green tone – created by decades of pollution that once literally had the Chicago River classified as “toxic.”

Only out-of-towners would think having a green river is cute. The rest of us realize how disgusting the concept is.

That is why I got my holiday chuckle from a commentary recently published by www.australia.to. One of that Australia-based news-oriented website’s columnists speculates that the green dye is really nothing more than toxic waste that has accumulated throughout the past year.

ASIDE FROM DISPOSING of such waste without having to deal with the Environmental Protection Agency, “it would explain the mysterious appearance of the Zebra mussels in the Illinois River – which are clearly mutated quahogs.”

So by that theory, the holiday meant to celebrate the saint who eradicated Ireland of snakes is also responsible for the rise of Zebra mussels in Chicago.

Does this mean that if someone ever figures out a way of eliminating the mussels in the Chicago area, people throughout Dublin will get intoxicated in his honor? It seems only fitting.

EDITOR’S NOTES: What does the rest of the world (or at least a few Internet geeks in Australia) think of us Chicagoans as we’re (http://www.australia.to/index.php?option=com_content&view=article&id=7013:st-patricks-day-now-100-snake-free&catid=108:dan-h-woods&Itemid=122) inclined to behave this weekend?

It’s too bad John F. Kennedy never got to hear the Shannon Rovers play (http://blogs.suntimes.com/sweet/2009/03/chicagos_shannon_rovers_to_pla.html) on his behalf.

A place for those of you with Internet access, too much time on your hands and deadened tastebuds (http://shamrockshake.com/) to go to find a Shamrock Shake.
Posted by Gregory Tejeda at 12:01 AM

Not a very good column, I have to say. Too self-indulgent on G. Tejeda's part, I'm afraid/