It’s a shame that Bill Veeck is not still alive. If he wer

e, he’d be the man whom I would want Chicago to put in charge of the efforts to bring the 2016 Olympic Games to the Second City.

It’s not because I would want midgets or fireworks or any spectacles to be used to entice the International Olympic Committee to realize that Chicago is a much nicer place (in my totally biased opinion) than Tokyo, Madrid or Rio de Janeiro (which my gut says is the front-runner).

BUT VEECK HAD an attitude toward his management of professional baseball clubs that I think would be totally appropriate in trying to persuade the thousands of Chicagoans who are somehow convinced that staging an Olympics in Chicago would be a bad thing.

Veeck was the man who, at various times, owned the Chicago White Sox (twice), the Cleveland Indians, the St. Louis Browns, and minor league teams in Milwaukee and Miami. He never spent more than six years at a time in any one spot, because he realized that actually owning a major league team was not the way to make money.

Veeck, in his 1961 biography “Veeck, as in Wreck,” noted that he made his money when he sold the team, and also managed to make money off sideline interests that fed off of the baseball team. 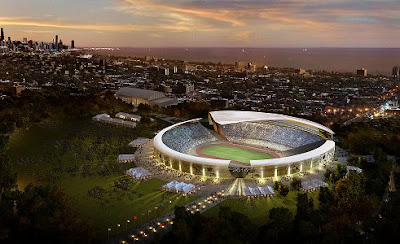 This computer-generated illustration is what a Chicago Olympic Stadium on the South Side would look like, at least until they disassembled most of it following the games. Illustration provided by http://www.chicago2016.org/.

That logic is relevant because a lot of people are tossing out the notion that Olympic Games spectacles are worthless for their host cities. It is next to impossible for a municipal government to make a profit on the actual staging of the games.

I’LL AGREE. I’LL also say that such logic is pretty much worthless.

What is relevant is how much of the infrastructure built for an Olympic Games remains of use to the city after the games are over and done with.

Many cities use the occasion of hosting an Olympics to build new athletic facilities that later go on to serve as home fields for their professional sports teams. That certainly was the case for the Olympics held in North America – where Los Angeles and Atlanta use their Olympic stadiums for college football and major league baseball, respectively.

And in Montreal, the construction of the “Big O” was what kept the Montreal Expos in the French-Canadian city for nearly three decades.

NOW IN CHICAGO, our sports teams are not in need of new stadiums, with the exception of the Cubs (who likely are committed to a major renovation of their existing building).

So what we have to gain from staging an Olympics are the services that feed into the staging of the games.

When the International Olympics Committee on Wednesday announced that Chicago was one of the four cities still being considered for 2016, they issued a series of rankings in various categories that indicated they have serious concerns about Chicago’s mass transit and its ability to handle the crush of people who will converge from around the world to the shores of Lake Michigan.

IN SHORT, THE Chicago Transit Authority (in fact, all the agencies that oversee mass transit programs in the six-county Chicago area) is going to need major improvements and expansion.

It’s not like those improvements would disappear once the games were complete (although it still amazes me that city officials are talking about a temporary stadium in Washington Park to host the opening and closing ceremonies and major outdoor events).

I wish Chicago area government officials were willing to take on the task of making mass transit improvements just for the sake of improving the system. But if it takes a major event like an Olympics to get our officials off their duffs, then I’ll settle for it.

Veeck would realize that the notion of whether an Olympic Games was a success for Chicago would be on whether the presence of the event made Chicago a better and more interesting place to be.

PLUS, LET’S NOT forget midgets and fireworks.

I don’t know what kind of crazy stunts he would have been coming up with all across the Chicago area, but he would have created an atmosphere that would have people eagerly anticipating the notion of world-class athletes coming to our city to show off their skills.

He would have made people want to get tickets so they could see the activity for themselves, almost so they could claim in future years that they were present for what was one of Chicago’s historic moments (seriously, an Olympics – if handled correctly – would be as significant event in the city’s history as either of the World’s Fairs held in Chicago).

Veeck also would have come up with stunts during the event so that, even if an athletic world’s record was not broken at the particular event one attended, that person would still have a pleasant memory of having fun.

INSTEAD, WE’RE GETTING Chicago political people who are letting this thing get bogged down in partisan politics. People seriously bring up the petty politics of Antoin Rezko and Todd Stroger – which likely will create an atmosphere among the International Olympics Committee that a Chicago Olympics is too much of a headache.

It’s no wonder that the Olympics observers watching the selection process are convinced that Chicago is Number Four on the list – and probably lucky that it didn’t get dropped Wednesday for Prague.

The Polish city was one of three that learned this week they are no longer in the running to host the Olympic games eight years from now.

CHICAGO CAN SAY it topped Baku and Doha as well. Woo Hoo! (Heavy sarcasm is intended).

I would find it depressing if this is as close as Chicago can come to staging a major international event, particularly since Chicago likes to think it is a “world-class” city (even though no two people have the exact same definition of what constitutes world-class).

I don’t understand the mentality of Chicagoans who would rather not be bothered with such events. The reason we live in a major metropolis is because we want to be at the center of the significant events.

If we wanted to be separated from the masses, we’d go live in some rural burg. Heck, I never would have left Springfield, Ill., which is a completely nice small city with an interesting historic character (you almost expect to see a plaque reading, “On this spot in 1845, Abraham Lincoln blew his nose) to it.

BUT IT’S NOT Chicago.

We ought to realize we are a central point of the United States, and not just because our city is located near the middle of the country. Chicago and the surrounding Midwestern U.S. could provide a truly American atmosphere to an Olympics that wasn’t achieved at any of the previous U.S.-hosted games in California or Georgia.

Instead, we seem too willing to give in and let the games go to Rio de Janeiro (allegedly the frontrunner in part because the games have never before been staged in a South American country).

I find such thoughts discouraging.

I WOULD LIKE it if come the 50th year of my life, my home city were to stage an event that would become one of the classic moments in its history – although I’m not sure an Olympics in Chicago would warrant a fifth star on the city’s flag.

And I would particularly enjoy being able to go to the games while taking a CTA elevated train that does not rock along rickety tracks that are more than a century old.

Not only would the spectacle be something to see, I like the notion that the city could feed off of the infrastructure improvements that would so desperately be needed if the event were to be held in the Chicago area.

The municipalities surrounding Chicago are expecting to garner their own economic benefits (http://www.bizjournals.com/milwaukee/stories/2008/06/02/daily25.html) if the (http://www.nwi.com/articles/2008/05/19/news/illiana/doc287bd1abccbaf0a48625744d007d52bd.txt) Olympic Games were to be held here.

Doha official were gracious (http://www.gamesbids.com/cgi-bin/news/viewnews.cgi?category=1&id=1212598639) in offering their congratulations to the cities that remain in the running for the Olympics.

The “Champion of the Little Guy” would have created such a fun-loving atmosphere (http://www.businessweek.com/bwdaily/dnflash/oct2004/nf20041027_3631_db078.htm) that Chicagoans would have been clamoring to have the 2016 summer games in their city.
Posted by Gregory Tejeda at 12:01 AM

Prague isn't a Polish city, being in the Czech Republic. Not Polish at all!

I stand corrected for my "moment" of stupidity.

May I suggest a link related to the Beijing 2008 Olympic Games?

Please let me know if you want a link back.
Many thanks for your reply.