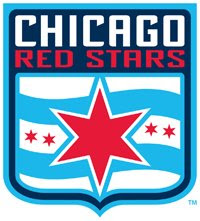 ranchise is guilty of either altering the city’s flag, or of grossly overestimating its significance in the city’s history.

How else to view the nickname, “Red Stars?” That’s the new Chicago franchise that will play in the Women’s Professional Soccer league beginning in 2009.

TEAM MANAGEMENT ANNOUNCED the nickname last week following a two-month-long contest by which potential fans were asked to choose a team moniker. “Red Stars” beat out nicknames such as the “Massacre,” the “Riot,” the “1871” and my personal favorite, the “Stinking Onions.”

The nickname alludes to the Chicago city flag, that non-descript banner of blue and white stripes with four red stars. Each of those stars is meant to signify a significant event in the city’s history – the original settlement at Fort Dearborn, the fire of 1871 and the World’s Fairs held in Chicago in 1893 and 1933.

In the logo designed for the team, the flag has five stars, and team officials explain that the fifth star is meant to signify the creation of the Red Stars as a women’s professional sports team.

In a sense, they are saying this team is as significant as the Great Chicago Fire (the inspiration for the nickname of the men’s professional sports team) or the first European settlement at the site where the Chicago River meets Lake Michigan.

THAT MIGHT BE pompous and arrogant. I have to wonder if any pennant or banner designed for the team could be construed as desecration of the city’s flag (is that a crime?) It might come back to haunt the team if they or their league flounders financially.

But I will give it credit for at least reflecting something about the city’s history, instead of some generic, cutesy nickname that sounds more like it was meant to inspire a fuzzy purple mascot to roam the stands and amuse the kiddies.

Team officials even went so far as to designate special meanings for each of the six points on the flag logo’s fifth star – entertainment (top point), service, success, community, teamwork and leadership.

Those meanings are kind of self-serving and cheesy, but it goes in accordance with the real Chicago flag, where each of the points on the four stars has attached to it a special meaning that city founders would like to think reflect the unique character of Chicago – such as justice, civic pride and religion.

I’M NOT GOING to run through the list of all 24 meanings, but needless to say, they are the image that Chicagoans would like to say they are about, and that ought to be the goal of all Chicago residents in their lives. (For those who really care to know, read the Chicago Public Library’s explanation of the city flag at http://www.chipublib.org/cplbooksmovies/cplarchive/symbols/flag.php, or click on the Chicago flag image to the side of this weblog for a lengthy analysis written by the weblog Chicago History.)

To me, that implies that someone involved with the team took the trouble to understand the history of the city and to know that the stars on the flag are not just stars, but an attempt to tell Chicago’s story.

It is a more logical nickname than the trend of late among athletic teams of naming themselves after weather-related characteristics.

The Miami Heat. The Dallas Tornado. The San Jose Earthquakes. Heck, one of the nicknames considered by this Chicago team followed that trend.

WE COULD VERY easily have been stuck with a team nicknamed the Chicago Wind.

So now, let’s look forward. It would be interesting if this new team could somehow beat the trend of other women’s athletic teams that have tried to do business in Chicago.

They failed. Usually, their whole leagues failed. The Chicago Red Stars could easily become the latest version of the Chicago Hustle. How many people besides me remember the team that used DePaul University’s old Alumni Hall in the late 1970s for its games in the Women’s Basketball League?

The Chicago Sky of the Women’s National Basketball Association has struggled to gain much of any attention (although the fact that their teams have been terrible has not helped). When it comes to the city’s athletic culture, the Matadors (those blubbery, overweight guys used as a parody of cheerleaders by the Chicago Bulls) gain more respect than any women’s team in Chicago sports history.

ONE FACTOR GOING in their favor is that this is soccer. This is a sport where the women’s game is taken seriously, due in large part to the image set in the 1990s by athletes like Mia Hamm, Julie Foudy and Brandi Chastain (when she wasn’t stripped down to a sports bra).

Unlike the U.S. national teams for men that are not the world leaders in the sport, women’s national teams from the United States are regarded as being the world power. A U.S.-based women’s professional league would be able to feed off the teams that have won women’s World Cup tournaments and would be a goal for top female athletes from around the world.

There is a certain fan base in this country that will take this version of the sport seriously.

Of course, there also is the fact that this is soccer, and some nitwits are going to want to disparage the game no matter what happens. The last attempt at a women’s pro league, the Women’s United Soccer Association, didn’t last long enough to put a team in Chicago, let alone build up anything resembling history or tradition.

EDITOR’S NOTES: The Chicago Red Stars hope to begin play next spring. They likely will (http://www.womensprosoccer.com/newsitem_ektid2984.aspx?team=chicago) share a stadium with the Chicago Fire men’s team out in suburban Bridgeview.

Potential fans of the new women’s soccer team picked the nickname “Red Stars.” Whether many of those people spend their hard-earned dollars to buy tickets to games (http://blogs.chicagosports.chicagotribune.com/soccer_redcard/2008/06/womens-team-to.html) will determine whether the team catches on in Chicago’s sports culture.

The Boston Breakers and the Washington Freedom, along with yet-to-be-named teams in (http://www.womensprosoccer.com/) Dallas, Los Angeles, New York, Philadelphia and St. Louis, will comprise the Women’s Professional Soccer league in its inaugural season.

Do the names Rita Easterling and Janie Fincher ring a bell in your mental backlog of Chicago-related trivia? They do (http://www.wblmemories.com/index.htm) in mine.
Posted by Gregory Tejeda at 12:01 AM

This is great news. I'd much rather take my girls to a women's soccer game than any other pro sport. Here's another article on the comeback of the sport.