Nobody is going to be popping champagne corks or singing Auld Lang Syne at the “Statehouse in Springpatch” Monday night, but it is a new year. And this year, things look ugly because of the inability of Gov. Rod Blagojevich and the Legislature’s leaders to put aside their petty bickering.

Monday is the final day for Illinois fiscal 2008. To people whose world centers around the activity in Springfield, 2009 begins Tuesday, and there’s still no balanced budget in place for Illinois government.

BUT WHILE THAT fact was kind of cute a month ago, it is getting scary now.

There’s always the chance that something will break Monday and the General Assembly’s leadership and Blagojevich will come up with a true budget proposal for Illinois. Then, reality intrudes on that political fantasy.

The people who run Illinois government are no closer now than they were a month ago to approving a legitimately balanced state budget.

My guess is that Blagojevich will take some sort of action or make some sort of public pronouncement on Monday that will be the basis of his future claims that it is, “the Legislature’s fault” that government could cease to function some time next week, or will be tangled up in chaos for months to come. 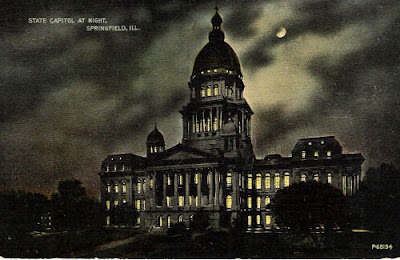 The Statehouse almost resembles a haunted house in this turn-of-the-century postcard. The activities of Gov. Rod Blagojevich and the General Assembly's leaders give the building that same creepy feeling today.

SUCH AN ACT would be no less petty than the budget the General Assembly approved at the end of May – the one that had a revenue shortfall of between $2-2.5 billion. The Legislature’s members knew their budget plan was flawed, but they approved it and left the Statehouse for the summer, figuring they could say “it’s the governor’s fault” when problems arose.

The fact that the Legislature went so far as to approve a budget (in theory, they met their obligation) is what confounds this whole situation when trying to figure out what is going to happen in coming weeks.

In theory, Blagojevich could make changes on his own. He could select portions of the budget and use his amendatory veto power to impose cuts totaling about $2.1 billion (the figure the governor believes accurately encompasses the revenue shortfall).

The Legislature would then have to reconvene in the autumn to decide whether the cuts are so onerous that they should be overridden. But until then, Illinois government would have a balanced budget proposal in place for fiscal 2009. The potential for a financial crisis would be averted for the time being.

OF COURSE, THAT would be too simple. Blagojevich wouldn’t be able to grandstand against legislative irresponsibility causing Illinois government to shut down. Also, he would have to make the hard choices over which programs would have to take cuts in their state funding in order to balance out the budget.

In short, Blagojevich would wind up getting all the blame for whoever winds up suffering from the budget mess. In Blagojevich’s mind, it is the Legislature that should shoulder the entire blame, and he is going to take whatever legal procedure enables his staff to say, “it’s the Legislature’s fault.”

That’s why members of the Legislature wrote off Blagojevich’s threats last week to make up to $1.5 billion in cuts to programs they favor as mere trash talk. The Journal-Courier newspaper of Jacksonville, Ill., went so far as to label the governor’s threat a “publicity stunt.”

The problem is that Blagojevich has tied a budget proposal in with another issue (one that technically does not have to be addressed this year, although it would behoove the Legislature to seriously consider the matter sometime in the next couple of years).

THAT IS THE concept of a capital projects plan – a massive list of construction and repairs the state would pay for to maintain roads and help with public works programs across the state.

If it were up to Blagojevich, he would do the capital projects plan (one version put together this spring would cost $31 billion, in addition to the nearly $60 billion state budget) and forget the budget talk.

Legislature types who don’t want to have to incur complaints from prospective voters for so much debt being incurred would prefer to ignore the capital projects and just do a budget.

We’re at the classic stalemate. Who’s to say how long it will last? It wouldn’t shock me if we got a political brawl this summer the equivalent (in terms of sheer stupidity) of the mess from ’07, where a budget didn’t get approved until August and a shortfall for mass transit programs didn’t get resolved until January of ’08.

SO SINCE IT is physically impossible for a budget to be in place for fiscal 2009 when that fiscal year begins (legislative procedures and processing of paperwork would take about 24 hours from the time political leaders reached an agreement until an actual vote could be taken by the General Assembly), what happens now?

State law prohibits any money being spent by state government if a state budget approved by all the parties is not in place. Money continues to come in to the state coffers and (for the time being) state agencies continue to do their work.

But the only bills that can be paid are the ones for work or services done during the old fiscal year. Anything that specifically relates to fiscal 2009 has to remain unpaid until a budget is approved.

In theory, this is a very sound requirement. The state should not be spending any money if a budget documenting spending priorities does not exist.

BUT IT MEANS that eventually, bills will have to go unpaid.

That is when his office will have to process the paychecks for state employees for the work they did during the first pay period of fiscal 2009.

If a budget plan is not in place, those checks won’t get cut. They won’t be delivered (or automatic deposits into state worker bank accounts will not be made). State workers will be in the position of having to show up for work and fulfill their duties, without any knowledge of when they will actually get paid.

ONCE A BUDGET is approved, those workers will receive all the money owed to them. But that is not of much comfort to those workers who will have to spend July explaining to debt collectors why they couldn’t pay their bills.

Just imagine how grumpy that motor vehicles bureau staffer will be without a paycheck after having had to justify his existence to a collection agency.

Just imagine how little he will actually care about doing his job properly, which will trickle down to those of us Illinoisans who actually rely on the state to perform services in our daily lives.

While imagining this, keep in mind that it all comes down to the governor and legislative leaders trying to posture and position themselves so they can say “it’s the other guy’s fault.” Somehow, I think the voters will just assume it’s everybody’s fault. For once, they will be right.

A massive mess in state government could be averted if the top people get their act together (http://www.sj-r.com/homepage/x2010597930/Hynes-No-budget-may-lead-to-no-pay) within the next week or so.

There is no pretty solution to the financial problems confronting Illinois government (http://www.myjournalcourier.com/articles/gov_18772___article.html/rod_cuts.html) these days.
Posted by Gregory Tejeda at 12:01 AM