Trinity United Church of Christ, with its large African-American congregation and message of black empowerment, used to be known nationally as “Oprah’s Church.”

Oprah Winfrey, the talk show celebrity who nominally is still a Chicagoan, used to be a semi-regular at the South Side church. She even had her pastor (the now-infamous Rev. Jeremiah Wright) appear on her nationally syndicated television program.

BUT OPRAH DOESN’T go there anymore. And now, neither does Barack Obama.

The U.S. senator from Chicago who dreams of being president in the near future went so far this weekend as to say he and his family will no longer attend the church.

The crackpots of our society who are determined to “take down” Obama are going to try to spin this as “too little, too late.” They will claim he is merely trying to make the church’s feisty retired minister go away as a political issue – and that we should not take seriously his withdrawal from the congregation because he was a member for two decades. 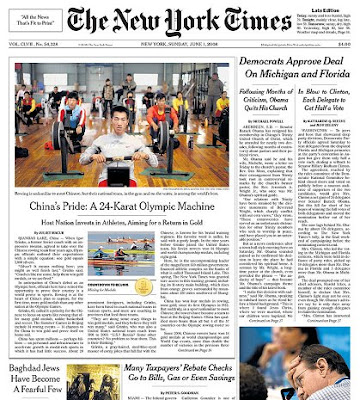 The New York Times attempted to play the story of Barack Obama's withdrawal from his church as a campaign counterpart to Hillary R. Clinton's failure to get full support for her Michi 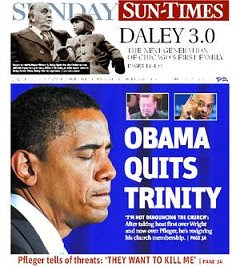 gan and Florida backers at the Democratic National Convention. Most other newspapers followed the lead of the Chicago Sun-Times in giving Obama's "crisis" full attention.

I actually liked Obama’s explanation that he didn’t want his presence to hinder the church. After all, he doesn’t have time to watch over every single church member and wonder if he is going to be tainted by their common association with the congregation.

“WE… DON’T WANT a church to the scrutiny that a presidential campaign legitimately undergoes,” Obama told reporters during an appearance in Aberdeen, S.D. “I don’t want Rev. Moss to have to look over his shoulder and see that his sermon vets or if it’s potentially problematic for my campaign or will attract the fury of a cable program.”

His resignation, he argues, will allow the church itself to get on with its life in serving its South Side congregation, instead of having to wonder if their activities are going to be twisted into something nefarious to be used against Obama. I would have lost respect for Obama if he had claimed he no longer agreed with his church of the past two decades.

But let’s be real. In terms of the practicalities of daily life, this means little. Obama, should he manage to win the presidency come the Nov. 4 elections, would be moving with his family to Washington.

Even during the past year, he has been preoccupied with campaign activity that has taken him to every single part of the United States and its territories (most recently, Puerto Rico). How active a presence could he have really been at Trinity United in recent months?

ONCE HIS PRESIDENCY were to end, it would be very likely that Obama would move on with his life. I won’t be the least bit surprised if the Hawaii native who has lived the bulk of his adult life to date in Chicago never lives in our city again (even though wife Michelle is a South Sider by birth).

So why would it be a shock that he would have to find a new church, or churches, to attend for the rest of his life?

The real question is to wonder if a President Obama would be affiliated in any way with the National Cathedral, the Washington-based Episcopal church (which offers non-denominational services) that some D.C. observers like to think of as the “Church of Presidents.”

I also wonder if any future ministers would have the nerve to turn Obama away, should he and his family was to try to join their congregation. Would they think the constant scrutiny from Obama critics make the celebrity status of being affiliated with Barack not worth the hassle?

I’D HOPE THAT pastors would not choose to be so petty. In fact, the very thought of a religious person refusing to accept someone else strikes me as being an un-Christian concept, as well as an immoral one.

In fact, I find the whole issue about Obama’s resignation from the Trinity congregation to be pointless. Just because he now chooses to attend church services in a different building doesn’t significantly change his religious beliefs.

If it did, then he is far more shallow than anyone ever gave him credit for. Seriously, I would envision any church regularly attended by the Obama family in the future would be one rooted in the traditions of the African-American communities of this country.

“I am confident that we are going to be able to find a church we feel comfortable with and that will reflect our concerns and values,” Obama said Saturday in South Dakota. “But I do think there is a cultural and a stylistic gap that has come into play in this issue.”

WHICH MEANS TO the people who believe the issues of Trinity and the Rev. Wright are legitimate ones for the presidential campaign, their real gripe is the concept of black-oriented churches in this country.

They want to demonize congregations that fall outside their definition of “mainstream” (a.k.a., anyone who isn’t just like me). I’d hate to think their real problem is with churches that cater to black communities.

Because then, this really does become an issue of intolerance based on race, which means that those people who want to lambast Rev. Wright as a “bigot,” and Obama (by association) as a “hypocrite,” are the true bigots of our society.

It makes too much of this politicking, turning it into nothing more than trying to detract attention from one’s racism by accusing your opponent of being racist too.

BUT PERHAPS, JUST perhaps, there are a few people who really don’t get offended by the racial angle that has been dragged into the presidential campaign by all of this focus on Trinity and the Rev. Wright.

Perhaps they just don’t want to back anyone who isn’t of the same church, or the same denomination, or the same whatever as they are. In my mind, that still comes down to religious intolerance on their part.

The same First Amendment to the U.S. Constitution that gives me the right to write this rant is the same one whose freedom of expression gives people the right to practice whatever religious beliefs they may hold. Which makes me wonder if all of this talk about whether Obama’s religion is proper is just as un-American as any act of censorship.

EDITOR’S NOTES: Barack Obama thinks his presence in the Trinity United Church of Christ congregation has become (http://time-blog.com/real_clear_politics/2008/06/obamas_press_avail_on_trinity.html) a burden, both for his campaign and for the church.

Sure enough, the Obama critics are going to use the issue of Trinity against the candidate (http://www.commentarymagazine.com/blogs/index.php/rubin/8881), even though he has formally dropped out of the congregation.

Members of the Trinity congregation seemed to feel that Obama was driven from their midst (http://www.npr.org/templates/story/story.php?storyId=91047010) by political pundits determined to use them against the likely Democratic presidential candidate.

Word of the Obama family’s intent to find a new church to attend once their lives return to semi-normalcy made its way around the globe in England (http://www.telegraph.co.uk/news/newstopics/uselection2008/democrats/2059974/Barack-Obama-cuts-ties-with-turbulent-church.html), China (http://news.xinhuanet.com/english/2008-06/01/content_8293202.htm) and Israel (http://www.jta.org/cgi-bin/iowa/breaking/108847.html).
Posted by Gregory Tejeda at 12:01 AM