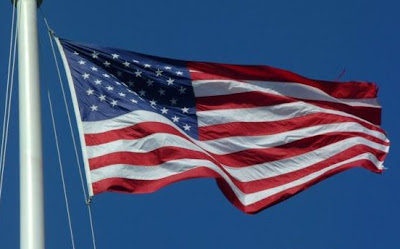 I have never claimed this weblog to be in any way affiliated with the old Chicago Argus newspaper. But if ever there was a day to recall that newssheet of the 19th Century, it is this day, for it is Flag Day.

Depending on whose account of the holiday you happen to read, it was the Argus that inspired creation of the day to which we pay tribute to the “Stars and Stripes” and all that it represents about the United States.

SPECIFICALLY, THE CHICAGO Argus of old achieved its part of the Flag Day saga when its editors published a commentary on June 14, 1886. Entitled, “The Fourteenth of June,” the essay proposed creation of a national holiday to celebrate the creation of the flag design of 13 red and white stripes with white stars on a blue field that has come to represent liberty and democracy all across the world.

Specifically, the mid-June day was chosen to commemorate the date in 1777 when the Continental Congress officially chose the “Stars and Stripes” design as that of the U.S. flag.

Bernard J. Cigrand, a Wisconsin school teacher, had already begun holding local Flag Day observances a few years earlier. But his essay in the Argus, and a speech before the Chicago-based “Sons of America” group two years later resulted in Cigrand becoming editor of the group’s journal “American Standard,” where he continued to promote respect for the symbols of the United States of America.

He also helped organize what must have been one heck of a spectacle for Chicago in 1894 and 1895, when more than 300,000 students of the Chicago public schools took part each year in a Flag Day celebration scattered across Douglas, Garfield, Humboldt, Lincoln and Washington parks.

CIGRAND, WHO WAS actually a dentist by trade in Chicago, Batavia and Aurora, later went on to become dean of the Columbian Dental College, which over the years has evolved into a part of the college of dentistry at the University of Illinois at Chicago.

Insofar as that old Argus newspaper is concerned, I don’t know much else about it, other than that it appears to be a creation of the 1880s and was defunct before 1900. Back then, there were up to a dozen daily newspapers in Chicago (both morning and evening editions), and while the Chicago Tribune survives from that era, many publications came and went.

The Argus itself was obscure enough that an official listing of all Chicago newspapers compiled by the Chicago Public Library does not even include it, although a listing of Second City rags put together by the University of Illinois at Urbana-Champaign does include it – although the university cannot provide exact dates of its existence, other than to say it was a 19th Century publication.

SO WHY BRING this up, if there’s no direct correlation between the Argus of old and this website?

I find it interesting that on this Flag Day that clearly is a national holiday, it is a creation of Chicago (even though to read the accounts of the holiday’s origins written by the Daughters of the American Revolution, Cigrand and the Argus are only minor players behind their own work to celebrate Old Glory).

I also find it intriguing that a newspaper that named itself for the giant from Greek mythology who had 100 eyes and could see in all directions at once used its clout to put muscle behind a Chicago dentist’s dream that we celebrate the symbol of the U.S. flag as a way of showing our love of the concept of democracy that we’d like to think our country stands for.

IT IS A noble concept, one that we all ought to believe in. All too often, people in politics and in our society are too quick to give lip service to the concepts of Truth, Justice and the American Way without really thinking about what they really mean.

Some even get so obsessed with the piece of cloth (although the U.S. flag I own is a nylon job that flew over the U.S. Capitol for a few seconds on Aug. 1, 1997) that they forget the ideals of which the flag stands for. It is the ideals that matter, not the piece of cloth itself. It is the reason I personally consider the issue of flag burning to be a trivial one, with people who insist on a constitutional amendment outlawing it to be wasting their time.

This holiday (which is one of the lesser ones that some of us likely didn’t even realize was occurring Saturday until they happened to stumble onto this commentary) is not so much about a piece of cloth/nylon. It is about the ideals that make this country a unique place on the surface of Planet Earth, and in the history of mankind.

Cigrand did not live long enough to see his life’s “crusade” become an official federal holiday (http://www.nationalflagday.com/bjc.asp), which was signed into law by then-President Harry Truman in 1949.
Posted by Gregory Tejeda at 6:14 AM