How eager are national political people to jump on Chicago Cubs’ bandwagon?

So is the key to Donald Trump actually prevailing in Tuesday’s presidential election the notion that all those Chicago Cubs fans drunk with the glory of their favorite ball club actually winning something for once now turn around and vote for him?


JUST A THOUGHT put into my head when I learned that Trump spokeswoman Kellyanne Conway was spreading thoughts about, letting people learn of the story that the FiveThirtyEight.com had published during the weekend headlined “The Cubs Have A Smaller Chance of Winning Than Trump Does.”


The website that likes to reduce everything that happens in our society down to mathematics wrote its piece back when the Cubs were one game away from losing the World Series. Who’d have figured Cleveland could be unable to win one more game in three tries?


Now that the Cubs have that World Series championship, Conway would like for us to think that Trump can overcome all the obstacles that various polls have shown stand in between Trump and the presidency.


Such as all those groups of voters that Trump has gone out of his way to demonize so that he could gain the political support of conservative ideologues and other crackpots in our society!


WHAT’S FUNNY IS that earlier this year, Trump tried putting some distance between himself and the Ricketts family, the wealthy people who own the Chicago Cubs and were once among the Republican types who publicly were denouncing Donald.

But the two sides have clearly made nice – what with the Ricketts family elder making sizable contributions to political action committees that are trying to get Republicans to overcome the contempt they may feel personally for Trump.


Although one of those political action committees is a group trying to get Latinos to take seriously the notion that they should cast ballots for Trump – even though Latinos have been amongst the groups that Trump has most vehemently demonized to try to get himself nativist votes.

Although the Latino Decisions group based in Miami recently came out with its own study saying that Trump likely was going to take about 18 percent of Latino votes come Tuesday – which will make him the weakest GOP presidential candidate ever when it comes to that segment of the electorate!


SO WHAT’S THE deal? The Ricketts family is now willing to blow the good will they’d gain from a Chicago Cubs victory by getting in bed with Trump?


Or could it be that the Ricketts family doesn’t realize the potential good will that could come from having their ball club be the preferential choice of the occupant of the Oval Office.


The Chicago White Sox certainly managed to gain some national attention from the fact that Barack Obama always vocally referred to himself as a fan – to the point where he ticked off Major League Baseball when he insisted on wearing his White Sox warm-up jacket when appearing publicly at an All-Star Game rather than a more-neutral jacket touting the game itself.


Do they not want a “President Hillary Clinton” who would think nothing of donning the baby blue of the Cubbies in public and talking up her own childhood memories of following the ball club?


OR DOES TRUMP, whose own baseball loyalties seem to be tied to being seen sitting next to New York Yankees former owner George Steinbrenner at Yankee Stadium, have some dirt that he really can use on the Ricketts family – as he hinted way back in March?


Speaking of Obama, I did find it intriguing that he issued his own statement acknowledging his Sox ties but also congratulating the Cubs and offering to have their White House visit take place before he leaves office in mid-January.


Which would be odd, since the official visit of World Series winners usually takes place the following spring, which would let presidents Clinton or Trump be the one who gets to look dorky while trying to leech public attention off the ballplayers.


Does Obama want to steal this moment from Hillary? Would it wind up being a joint Obama/Clinton appearance with the Cubs? Or is Barack trying to ensure that it won’t be a President Trump that gets a moment of glory being seen in public with the baby Bruins? 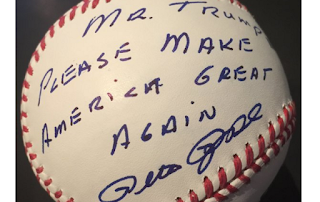 EDITOR'S NOTE: The fact that one-time baseball star Pete Rose signed that particular ball for Donald Trump is probably enough reason not to vote for him to be president. Particularly since it makes me wonder how much Rose charged Trump for his autograph, which may well be his most reliable source of income -- unless you really thought much of Rose's performance as a sports commentator during World Series broadcasts!
Posted by Gregory Tejeda at 12:01 AM