EXTRA: Leftover papers? Or souvenirs for those 5M who supposedly attended victory parade in Grant Park? 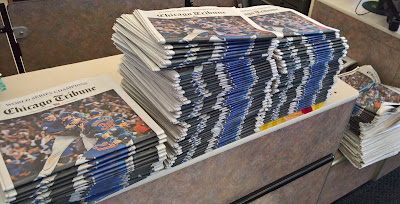 So what should we think of these piles of Thursday newspapers found Friday afternoon at a Walgreens' pharmacy in the southern part of metro Chicago.

Sox fans appalled at the front page play? Or Tribune Co. (that's Tronc, to those in the know) wanting to make as much money as they could off the Nov. 3 editions of the paper, to the point that they printed up more copies and had them shipped out to stores all over the place?

THE SALES CLERK at the Walgreens where these stacks were seen told me people were so anxious to buy the paper on Thursday that her hands were all blackened from the newsprint ink. "You'd think I worked at the printing plant," she told me. So more copies of the Thursday paper arrived Friday. Similar to how more press runs were printed up back in '08 when Barack Obama became president.

I get the idea that many people are going to want something of a keepsake of that particular date. There's just one thing to keep in mind -- with so many copies of the paper being printed, they're not going to be scarce for a long, long time - if ever!

And the only way anyone's copy of the Thursday paper will ever become worth anything is if your copy, and the copies of just about everybody else you know, wind up becoming trash throughout the years.