I enjoy Chicago, take a certain amount of pride in being able to say I was born here and have lived the bulk of my life here. I also think this city is a wonderful place that everybody in the world ought to come to enjoy at least once in their lifetime.

Yet I have to confess to always feeling a little tinge of embarrassment whenever I read something reminding me that Navy Pier is the Number One tourist attraction not only for Chicago, but for the state of Illinois.


IT JUST SEEMS a little silly, to me, that people who have taken the time and effort to make the journey to Chicago wind up wasting their time checking out the pier, or at least what has become of the pier in the past three decades.


The giant Ferris wheel gave the place a carnival-like atmosphere. And I realize the historic implication of a Ferris wheel in Chicago being reminiscent of the worlds’ fairs that were held in our city.


But if you think about it, you can ride a Ferris wheel anywhere. Admittedly, you won’t get a great view of Lake Michigan at the top of a wheel at some rural county carnival. But a wheel is a wheel.


Even more silly, to me, was that Bubba Gump Shrimp Co. restaurant located at the pier. Created to feed off the popularity of the 1994 film “Forrest Gump, it also is something that seems so absurd. With all the quality dining one could find in Chicago, people would be expected to choose a brand that has 43 locations across the United States, along with Mexico, Great Britain, Malaysia, Japan, the Philippines, Indonesia and Hong Kong. 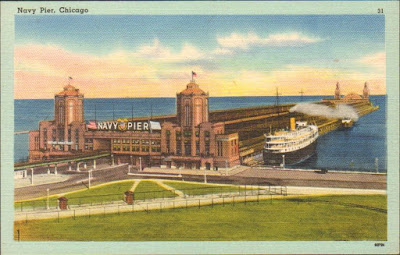 IT COMES ACROSS as being a real-life take on the gag from that episode of “The Simpsons” where the family goes to Japan and winds up eating at the “Americatown” restaurant, where mom Marge gets excited about seeing the Japanese take on the club sandwich!


In short, Navy Pier isn’t a place I go to very often (and not just because I’m a cheap grouch!). So I have to admit to feeling a jolt of excitement when I learned this week of the City Council contemplating an overhaul of the place that was erected a century ago as a pier for those ships sailing into Chicago off Lake Michigan.


Which makes the pier’s incarnation of recent years seem so ridiculously absurd. I doubt that those sailors who arrived in Chicago at the pier some 90 years ago, or those people who came to the pier to fish a half-century ago, ever would have envisioned a place that had lots of shops where one could buy various incarnations of a “I (heart) Chicago” coffee mug.


The council’s zoning committee gave its approval this week to a plan calling for a seven-story hotel to be built on the pier, along with amenities such as a winter ice-skating rink, a sloped-roof welcome pavilion (which likely would continue to have all those gift shops selling tacky trinkets) and some short-term boat docking facilities.
IT IS, AFTER all, a pier. Which means boats. The people who conceived of the need for a pier sticking out one mile into Lake Michigan didn’t do so because they wanted a unique site for a carnival ride.


Although I also realize that ships transporting goods don’t arrive at Navy Pier anymore. What little shipping still arrives in Chicago sails into the piers down around Lake Calumet.


So I realize that the pier has to evolve, or else become pointless and rot away. Which is the fate it nearly suffered by the late 1970s.


I can remember the days just before the remodeling of the 1990s when the structure was largely vacant and it was obvious that the facility had a very practical purpose for briefly storing goods brought in from ships.


I CAN REMEMBER making the walk to the pier offices at the far east end of the facility, having to go through all the vacant space and feeling like it was such a waste. The ghosts of college students past from the pier’s UI-Chicago days and those from the days when World War I-era draft dodgers were incarcerated there were all over the place.


Plus, I’m also old enough to remember the “Chicagofest” festivities held at the pier that then-Mayor Jane Byrne always liked to think were the biggest part of her legacy to the city. Closing my eyes could bring to mind memories of seeing Muddy Waters perform there, along with the Turtles (remember “Happy Together?!?”).


Losing some of the sillier touristy aspects of what has become Navy Pier will be a plus – particularly if it provides a facility that can enhance Chicago as a whole.

Although I suspect I still won’t become a Navy Pier regular, because I think that whatever hotel winds up being built at the site will be one I won’t stay at because it will wind up far beyond my own income level.