I don’t remember where I was 40 yrs ago, but NASA didn’t leave my psyche cold

The occasionally oafish pater familias of the Simpso 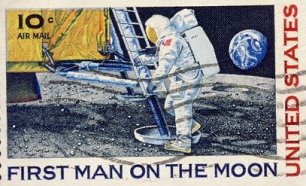 n clan (which has been around for nearly two full decades now) was alive in animated form on that day 40 years ago today when Neil Armstrong left his footprints on the surface of the Moon.

YET IT MADE little impact on his psyche (remember the episode that contained a flashback letting us know that at the moment the rest of the world was captivated at the thought of human beings walking on the lunar surface, a then-teenaged Homer was more interested in listening to his radio – the 1910 Fruitgum Co.’s “Yummy, Yummy” was playing).

It made an equal impression on my psyche as well – I have no recollection of the day. Although in my defense, I was 3 years old, getting ready to turn 4 about a month later.

So I can’t share some heartwarming tale of how a youthful version of myself living then in the East Side neighborhood was inspired to think big and shoot for significant goals and achievements in life.

For me, it was a pair of later Apollo missions (those were the National Aeronautics and Space Administration efforts of the late 1960s to the early 1970s to go to the Moon) that caught my attention.

FOR I CAN remember where I was on the day that Apollo 14 landed on the lunar surface. That was the third

successful Moon mission (we all have Tom Hanks and the film “Apollo 13” to thank for teaching us what little we know of the one unsuccessful mission in between).

I can remember being in kindergarten on the day when that mission touched down on the moon. It wasn’t every day back then that a television set was wheeled into the classroom.

And it was definitely a treat that my teacher, Mrs. Pugh, didn’t insist on having us 5-year-olds take our daily nap.

Instead, we got to watch the news broadcasts of the day (Feb. 5, 1971) that Alan Shepard Jr. and Stuart A. Roosa did their attempt to leave their footprints for immortality on the Moon.

I KNOW SOME of us in the kindergarten class at Patton Elementary School in suburban Riverdale (we had moved from the East Side by then) saw nothing more than grainy black-and-white pictures – the way that some people are going to want to denigrate the images that will be reshown over and over again on Monday of the moment that Armstrong put his foot on the Moon.

But one has to admit that it was quite an achievement – being able to take ourselves to the surface of another sphere in this universe. It is Step One in the ongoing process to which we have yet to this day been unable to advance – visits to another planet.

The day that technology is advanced enough to let us send anything more than satellites and probes and other mechanical devices to land on the surface of Mars or any other planet will be a great moment – one that will eclipse the Moon landing because, let’s face it, the Moon ultimately is little more than a giant rock floating in space.

Now some people are going to claim that I’m somehow missing the point by bringing up Apollo 14, rather than focusing on Apollo 11. But when one considers just how few people have ever walked on the lunar surface, I’d have to say it is a pretty exclusive “club.”

WHY SHOULD ARMSTRONG get all the attention?

Of course, federal budget constraints of the 1970s and the impression among many people in this country that there wasn’t much of anything on the Moon worth visiting caused the end of the Apollo project.

NASA has done many space flights since those days, but none of them seem to give off the same inspiring aura of 1969. In fact, ever since 1975, I’d have to argue that the only time NASA comes into the public consciousness is when something goes wrong severely enough that people die. 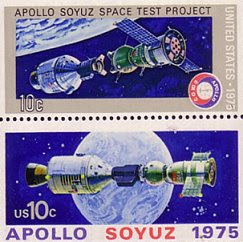 The reason I mention ’75 is that I remember being a nine-year-old inspired by the whole concept of Apollo-Soyuz.

THAT WAS IN the midst of the Cold War and when people who engaged in rants about “the godless Commies” were actually taken seriously.

So for NASA to cooperate with the Soviet space program and engage in a joint mission had ramifications that went far beyond the meager scientific goals that were accomplished for the couple of days that a U.S. and a Soviet space craft were docked together.

Astronauts and cosmonauts were as one for a few days. The idea of a cosmonaut seeing the inside of a NASA spacecraft wasn’t treated as potential for the leaking of national security in the form of specifications of how advanced the U.S. space program was. It was a time when people for a couple of days put aside politics out of a desire to advance the betterment of mankind.

And if that is the youthful impression I developed of NASA, perhaps it is the attitude we ought to remember on this anniversary of the day that Armstrong engaged in his now classic slip of the tongue that underestimated the significance of human beings walking the lunar surface.

EDITOR’S NOTES: I may not remember where I was 40 years ago today, but some NASA (http://www.lpi.usra.edu/lunar/missions/apollo/apollo_14/) missions from my youth (http://history.nasa.gov/apollo/apsoyhist.html) left their impressions on my mind.
Posted by Gregory Tejeda at 12:01 AM