While many people enjoy the thought of attending a professional baseball game as part of the Independence Day holiday celebration, it would appear that the Ricketts family took things a step farther.

It appears they finalized a deal to buy themselves a major league (theoretically, that is) ball club – the Chicago Cubs.

THE CHICAGO TRIBUNE reported Monday that Tribune Co. reached a tentative deal to sell the Cubs to the Ricketts family, a deal that could have been made months ago had it not been for the stubbornness of some officials that any transaction involving the Chicago Cubs set records for the amount of money paid for a ball club.

But in these tough economic times, nobody is going to pay record-high prices.

And what seems odd about the deal as reported by the newspaper is that the actual price is pretty close to what was nearly agreed upon several months ago. 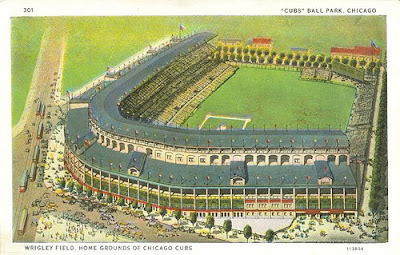 This plot of land, which hasn't changed much in 76 years, could be a valued part of the overall Tribune/Cubs transaction.

So for somewhere in the area of $850 million, the Ricketts family will get the rights to operate a National League ball club in Chicago, ownership of a square block of land at Clark and Addison streets in the Lakeview neighborhood and one-quarter ownership of the Comcast Sports Chicago cable channel (ch. 37 on many local systems).

THIS DEAL IS close enough that baseball officials are turning over the financial data to that legal entity known as Major League Baseball.

For now the owners of all the other 29 teams in the American and National leagues will get to have their say (including Jerry Reinsdorf and his business supporters who run the Chicago White Sox). It will take a majority of them to agree that the Ricketts family isn’t “bad” for baseball.

Just what that means is vague. Baseball gets to define its ownership qualifications pretty much on its own terms, and likes to operate as though it doesn’t have to answer to anyone. Remember how the White Sox themselves a couple of decades ago could have been bought by the DeBartolos, but baseball officials suddenly got religion and complained about the family having interests in racetracks?

It was like Capt. Renault objecting to “gambling” taking place in Rick’s Café Americain, but it stuck.

SO WILL THE other owners find the equivalent of racetracks in the Ricketts business operation? Or will they be so eager to have the Cubs transferred to ownership that cares about the ball club that they will approve anything?

I hope so. Because even though I personally am a baseball fan who cares less about the Cubs or anything in the National League (except to see which team they put forth each year to lose the World Series to the American League champions), the fact that this Cubs transaction has stretched out for so long is embarrassing for this city.

After all, Sam Zell made it clear on the first day he and his group took over Tribune Co. that the one property they weren’t interested in was the Chicago Cubs.

He pleaded ignorance as to the ways of operating a major league baseball team, even though he had long been one of the anonymous business executives who supported Reinsdorf and the White Sox by owning a tiny sliver of that ball club.

ADMITTEDLY, MANY PEOPLE thought Zell was being overly optimistic when he said back in December 2007 that he’d sell the Cubs by Opening Day.

But here it is, mid-way through the 2009 season, and Zell still has the team in his possession. For a guy who was so eager to unload the team, it seems strange that his tenure will wind up consisting of two full seasons with the Cubs.

There was all the talk early on that the Cubs sale would top $1 billion – which would be a record for a professional baseball team. It was supposed to be evidence that the Cubs were somehow a property more treasured than any other sports franchise.

It ignored the fact that the previous records were set by companies that bought broadcast properties and also acquired the ball club so as to have direct control over the sports product they were broadcasting.

THE TEAM ITSELF isn’t worth that much (those of us who root for the White Sox wouldn’t pay more than a buck to see a ball club that hasn’t won a league championship in 64 years, but that’s just our funny little quirk about wanting to see a winner).

But in the end, it was those declines that are hurting the news business (both broadcast and newspaper) that caused people to quit being stubborn, and allowed the Ricketts family the potential of saying they got a “bargain” at $850 million.

That’s assuming the major league owners and the Bankruptcy Court that is reviewing the Tribune Co.’s finances these days don’t find reason to object.

I hope they don’t.

BECAUSE IF THE Zell era winds up running into Season No. 3 and he still has control of the team in 2010, then Chicagoans are going to start including the Cubs’ on-field woes among the list of failures that he brought to the Tribune Co.

The Tribune Co. stripped the Chicago Tribune down in content to the point where many of its longtime readers don’t recognize it, and failed to take advantage of many situational perks that appeared as though things were aligned for a championship or two on the North Side.

Zell was the guy who had a legacy of making big money out of financially struggling companies. But he could be converted into the guy who trashed the Tribune and the Cubs all in one shot.

EDITOR’S NOTES: Could the Chicago Cubs have new ownership by year’s end? It would (http://www.chicagobreakingnews.com/2009/07/cubs-sales-deal-finalized.html) seem so. How much (http://www.chicagobusiness.com/cgi-bin/news.pl?id=34635) did a profit margin declining from 19 percent last year to 8 percent so far this year influence the decision to finally sell?

thanks for this nice information