When I learned about the surroundings for the announcement Friday that Roland Burris will finally retire from political life, I couldn’t help but be reminded a bit of the Rev. Paul Hall.

The reverend was a South Side pastor who had developed a reputation for running a church that did many good works in impoverished neighborhoods, and also had become a foster father for many troubled youths.

BUT HALL ULTIMATELY committed acts considered improper with some of those youths entrusted to his care, which led to his trial, conviction and eventual sentence to a four-year term in a state prison.

I was at the courthouse in suburban Markham the day some two decades ago that Judge Paul T. Foxgrover (who himself later was convicted and imprisoned on corruption charges) sent the Rev. Hall to prison. I remember it because the courtroom was packed with a lot of young boys who were determined to believe that “the system” was penalizing the reverend unjustly.

One of those boys literally tried to snatch my notebook out of my hands, while screaming at me that he’d write my story for me and that his account of a railroaded reverend would be more honest than any copy I’d produce. 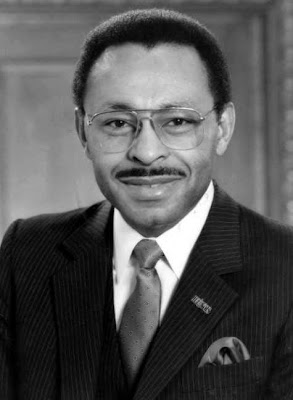 Some two decades ago, Roland Burris was a politico with a bright future. Who'd have dreamed it would end like this?

I couldn’t help but remember those boys, whose presence in the courtroom was meant to create the impression that the world loved the Rev. Hall, when I heard about the scene at the Chicago South Loop Hotel.

26th AND STATE streets is far from any site that a political person would use if he were truly trying to encourage the world to watch him make his announcement. But it was a site within the world that Burris would have been forced to rely upon had he stubbornly insisted on proceeding with a campaign for the U.S. Senate.

As Burris himself said, he picked a site on the South Side, since that is where his political aspirations began. He literally used a youth gathering at the hotel as the setting for his announcement that he wouldn’t seek his own full term in the U.S. Senate.

Anywhere else, Burris would have received a reaction of cheers and taunts.

But at the South Loop Hotel (which is on the site of what was once the South Parkway Inn and the Michigan Plaza Motel), Burris got to hear cries of “don’t do it,” and chants of “run Roland, run.”

IN SHORT, HE got an audience that felt like they were supposed to be sad about the announcement. One final shot to bloat the famed Burris ego before he goes off and finishes the final 18 months of what was once Barack Obama’s term representing Illinois in the U.S. Senate.

Then, he gets to return to retirement to the Chatham neighborhood home that literally was once the abode of gospel singer Mahalia Jackson.

Now as anyone who has read my past commentary published here about Burris is aware, I have never been as critical of his presence in the U.S. Senate as some people out there are.

I always thought it appropriate that a caretaker of sorts receive the post to finish out the final two years of the Obama term. Come 2010, we can have a free-for-all in the primary and general elections to pick our long-term replacement.

SO IN A sense, I’m pleased that Burris has come about to seeing himself as that caretaker. He finishes out the remaining time on the term, and will be able to claim it on his political resume (and the more sarcastic among us will note how quickly he has it added to the marble inscription on his already-erected tomb at Oak Woods Cemetery).

The bottom line is that Burris, the man who has always thought so much of himself, came to realize he literally was nothing more than “The $845 Man.”

That is the dollar figure that will always be remembered – it was the amount of money that Burris was able to produce in campaign contributions for the first few months of this year.

It is a pitiful figure.

EVEN WEAK CANDIDATES would be expected to have $100,000 or so from that time period, and the Chicago Sun-Times reported Friday that Illinois Treasurer Alexi Giannoulias has managed to raise $1.8 million thus far for a political fund that could be used to pay for a campaign for U.S. Senate.

About $670,000 of that came during the past three months. In short, Giannoulias is threatening to become the frontrunner in this race – regardless of whom the GOP thinks about putting forward and how many times they scream the name “Blagojevich” from the top of their lungs.

In short, a Burris campaign had the potential to be grossly outspent by a kid who’s only in his first term as a state government official (and whom some think only gets paid attention to because he’s a one-time basketball-playing buddy of Barack Obama from the University of Chicago).

So Burris’ announcement was all about saving face for the political future – although some pundits will be determined to trash Roland forevermore because he was willing to take a political appointment from Rod Blagojevich. And some of us will think that Roland chose to leave this political world by hiding behind children.

EDITOR’S NOTES: Just weeks after Roland Burris’ Senate staff finally got their official website (http://burris.senate.gov/) up and running, Roland, Roland, Roland lets us know he’s now looking to leave the District of Columbia.
Posted by Gregory Tejeda at 12:01 AM

If Rolland Burris' actions are being compared with a convicted sex offender then it's a good thing he never made it to The Senate. lol