The New Yorker magazine, one of the few publications that tries to give a forum for respectable writing and detaile 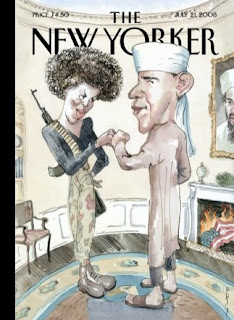 d reporting, is the same outfit that these days thinks it is being satiric by feeding off the notions that Democratic presidential hopeful Barack Obama is a Muslim.

Dropping the “S” word is how the magazine is defending the cartoon that provides the art for the cover of this week’s issue.

OBAMA IS DEPICTED wearing robes and a turban similar to what he wore in that photograph circulated earlier this year amongst the websites of many Barack bashers, while potential first lady Michelle is shown as some sort of Angela Davis-wannabe – packin’ an AK-47 (she can’t even use an All-American M-16 assault rifle!).

The cartoon also shows a U.S. flag burning in the fireplace of the Oval Office, and a portrait of Osama bin Laden hangs overhead.

Backers of the artwork are screaming “satire” to describe this, claiming they are throwing in every cliché that has been spewed by Obama’s critics (even down to the “terrorist fist bump”) to show just how ridiculous the Muslim image is.

By that logic, we’re supposed to realize that Obama is as “true blue American” as they come. (Actually, he’s the perfect example of the 21st Century America, as opposed to the 19th Century version of the country that some social conservatives wish they could resurrect).

THE PROBLEM IS that this particular piece of artwork is extremely complex. It requires that people know a lot of details about Obama to appreciate how ridiculous it is.

And the simple fact is (as I have been forced to acknowledge repeatedly whenever listening to people talk about what they know of the two candidates) is that most potential voters know only little snippets of the two men with serious dreams of living for the next four (or eight) years in the District of Columbia at 1600 Pennsylvania Ave., N.W.

To those people in this country who are convinced that this “Osama” guy who wants to be president is showing he’s a liar by trying to pretend that he’s of a Christian religious faith, they likely will see this cover and take it for confirmation of all the rumors they have heard.

What’s worse is the fact that there are many people in this country who don’t pay the New Yorker any attention at all. So all they are likely to hear about is that some magazine had a cover picture of Obama the Muslim with his whacked-out wife.

THE NEW YORKER, as unintended as it might have been, may have given comfort to the very elements of our society to whom they were trying to refute.

Satire is a tricky thing to use. The whole point of a commentary or artwork being satiric is that it is supposed to make the exact opposite point of what it appears to be on the surface.

Too many people who write or create art for a living think “satire” is synonymous with “critical,” as though they can use the label of satire to defend themselves when people start attacking their work on its merits.

Satire can be offensive. When done properly, it is supposed to make people feel squirmy about their beliefs.

AT ITS BEST, it is supposed to get the public aroused with anger over an injustice in our society. The ultimate piece of satire was Jonathan Swift’s, “A Modest Proposal,” where he suggested that the impoverished people of Ireland eat their children so as to reduce their numbers. Its serious point was to show that the people of that Celtic country were living in misery.

For a more contemporary piece of satiric artwork, there’s also the New Yorker magazine itself. Back in 1995, the magazine’s editors noted that Good Friday fell on the same date when the Internal Revenue Service demands that people file their income tax returns.

The magazine managed to offend many fundamentalist Christians with their cover art that depicted the Easter Bunny being crucified on a cross made up of IRS 1040 forms. But it did capture the feelings of agony many people go through every year when having to justify their income to the federal government.

This latest New Yorker magazine cover does not capture any greater truth.

THIS ARTIST MIGHT have meant well with his cover art, but the only people who are going to see merits in the cover art are those xenophobes who are most bent out of shape over the presidential candidacy of Obama (“How dare a man whose father came from a non-European country and who lived part of his childhood in an Asian land think he can be fit for president?,” is what many of them think).

That is why it was reassuring to hear Republican presidential opponent John McCain speak out against the New Yorker. His attack likely will prevent all but the most socially pathetic of our society from being able to trot this cover art out and use it to score political points.

So where do we go from here?

The shame is that the cover art is likely to draw attention away from the story the New Yorker published about the Obama campaign, which seems like the millionth magazine take on the Barack phenomenon.

THERE’S A GOOD chance that most people who pick up the magazine will stop reading after they look at the cover cartoon. After all, there are so many other magazines on the rack with Scarlett Johansson’s appealing pictures, why bother with yet another Obama piece?

In that regard, the cover is a journalistic failure. Magazine covers are supposed to draw people into the contents of a particular issue, not serve as a barricade to people wanting to read what’s inside.

EDITOR’S NOTES: This is the New Yorker story about how much of Hawaii native Barack Obama’s personality is influenced by his Chicago connections that will be totally (http://www.newyorker.com/reporting/2008/07/21/080721fa_fact_lizza/?yrail) overwhelmed by its cover art. It is ironic (http://www.washingtonpost.com/wp-dyn/content/article/2008/07/13/AR2008071301904.html?nav=hcmodule) that the Washington Post came out with a similar story on the same day.

A rehash of “A Modest Proposal,” for those of you who thought Jonathan Swift didn’t do anything more with his life (http://art-bin.com/art/omodest.html) than write “Gulliver’s Travels.”

Was “Theology of the Tax Cut” crass commercialism, or a serious commentary on the (http://findarticles.com/p/articles/mi_m1058/is_n14_v112/ai_16883510) overbearing pressure of the “tax man” in the United States?
Posted by Gregory Tejeda at 12:01 AM

The only reason that this Mr. & Mrs. Obama satire DOES have impact — and may very likely spread — is because like all good satire, or good humor for that matter, there’s more than a germ of truth in it. Otherwise, the satire would utterly roll off the Obamoids’ backs, having no impact.