It feels great to be publishing again 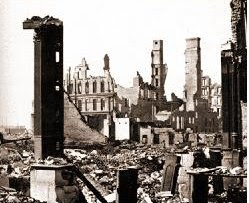 use me of exaggerating the significance of my predicament, but I can almost identify with the mood of those Chicagoans who were alive in the final days of October 1871.

It was earlier in that month that a fire allegedly started in a barn managed to grow out of control and devastate much of the city, and the people of Chicago in those days would have been justified had they just thrown in the towel and moved elsewhere, leaving the remains of a frontier town to become a ghost on the shores of Lake Michigan.

INSTEAD, THEY REBUILT. In the process, they created one of the great cities of the world. I’m not sure my attempts to rebuild the Chicago Argus (and its sister weblog, The South Chicagoan) will achieve the same level. But I feel the same spirit in wanting to resurrect the sites that were attempting to provide intelligent commentary and analysis of the happenings of Chicago (and of the world, as perceived from Chicago).

Insofar as what went wrong, I must admit it has taken me several days to figure out, and even now I only have a partial understanding of what caused the Chicago Argus and South Chicagoan to be shuttered for fivedays – it was only a few minutes ago that I regained control of the sites.

Basically, I wrote a commentary late Wednesday about Starbucks’ franchises in the Chicago area. Then, I went to bed.

When I woke up Thursday, I discovered that the passwords that allow me access to the editorial content were no longer working (which is why I did not provide an update indicating that the number of Starbucks’ stores in the Chicago area being closed was significantly increased in the hours after I published my say on the matter). It also is why I did not trash Gov. Rod Blagojevich for making a mockery of law enforcement problems with his ridiculous talk of National Guard tactics being used in Chicago.

THE EXPLANATION I received eventually was that Google shut down my account when it detected someone trying to use the e-mail account connected to the sites to send out the enemy of every Internet user – spam.

Because of Google security measures, I was unable to resurrect my ability to access either weblog.

Now as best as I can tell, none of the commentaries published during the past seven months have been tampered with. The archives of both sites appear to be un-compromised.

Of course, I have not re-read every single word I have written at these two sites, so there’s always the possibility that some clown decided to try to rewrite me, for kicks or to satisfy some sort of ideologically-inspired grudge.

THAT’S WHAT GETS me about this whole affair. I’m not sure what to think of the motivations of the people who started a chain reaction that resulted in the sites sitting idle for a few days.

Is this the equivalent of some computer geek who thinks he’s showing off his technological skills by messing with someone else’s site (like the time the New York Times had their website tampered with and turned into a promotion for soft-core pornography), or is this someone who disagrees with me (I know they exist, they are good at sending me excessively lengthy e-mails telling me I am full of caca for what I write).

Am I really dealing with the equivalent of white supremacist groups who like to print up their fliers, insert them into copies of a newspaper that have not yet been sold, then have the gall to complain their views are being censored because they can’t force their view on someone else.

All I can say is that I have started again, and I intend to resume the previous publishing schedule. It feels good to know that commentaries and news analysis will resume early tomorrow, and will continue to be published daily through Friday, with a feature-y piece for the weekend.

I LIKELY WILL never know the exact motivations of the people who caused the site to die for a few days. If it is merely a computer geek, then this is just sad. If it is somebody’s idea of a political statement, then it is pathetic.

Regardless, I have never been the type of person who lets sad or pathetic individuals get the best of my work. I only hope whoever did this doesn’t have delusions of having a Hollywood film made about their activities.

Even though the City Council later absolved her of any responsibility, Mrs. O’Leary and her cow wound up being the focus of that fictionalized version of the Great Chicago Fire from 1937 known as “In Old Chicago.”

Posted by Gregory Tejeda at 3:17 PM

I'm glad you're back!