Impeachment of Blagojevich ought to be an embarrassment for Illinois residents

Based on what we know to date, Illinois Gov. Rod Blagojevich has not done anything that would warrant impeachment, conviction or removal from office.

That doesn’t mean he hasn’t behaved like a goof while in office (last week’s temper tantrum with Chicago reporter-types while being questioned about various investigations was just pathetic). But anyone who has a problem with Blagojevich’s conduct thus far is upset for politically partisan reasons.

I FIND THE thought of impeachment just because one is upset about the way the 2002 and 2006 elections turned out to be a far scarier concept for the people of Illinois to have to cope with than anything Blagojevich has done during his six years as governor.

I have avoided mentioning the concept of “impeachment” to date because I find it absurd to have it bandied about so cavalierly. Impeachment, along with the trial and removal from office, should literally be for the highest crimes committed by a government official.

Mere incompetence by Milorod (or petty jealousy on the part of the electorate that would have preferred to have someone else win either of the two gubernatorial elections held in this century) is not a good enough reason to taint the reputation of Illinois. 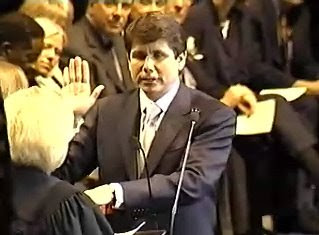 Who would have thought when he took the oath of office that people would seriously be wanting to impeach Rod Blagojevich? Photograph provided by state of Illinois.

For those people who want to bring up the name “Antoin Rezko” and mention various snippets of political trivia that came up during his recent trial in U.S. District Court, all I have to say is that we have heard mere crumbs. Outside of a few federal prosecutors who aren’t talking, nobody has any real dirt or substantial evidence on Blagojevich. Not yet, anyway.

TO BE SERIOUSLY talking of impeachment at this point is absurd. Yes, impeachment of a governor would be a blot on the whole state.

After all, we were stupid enough to elect him twice (and may very well do so a third time in 2010 – since the GOP in Illinois is that weak). If anything, we the people of Illinois should have to live with incompetence through the rest of the term. Personally, I don't think it is incompetence as much as that he is just stubborn and uncompromising about his desires for Illinois.

Blagojevich’s critics ought to be focusing their attention on the next round of statewide elections. Try to come up with a legitimate candidate to challenge him. If you can’t, then pipe down with your objections.

What caused me to bring the “impeachment” issue up now is the special session that Blagojevich ordered for the General Assembly this week.

MEMBERS OF THE Illinois House and state Senate are being required to convene at the Statehouse so they can figure out a way to close a $2.1 billion gap that exists in the state budget approved by the Legislature in May for the current fiscal year.

Blagojevich could use his “amendatory veto” powers to impose changes of his own, but he won’t. Largely, he does not want to have to take the blame from whichever programs wind up getting cut in order to balance out the budget.

He wants the Legislature to take the political hit.

But the Legislature’s leaders, particularly House Speaker Michael Madigan, D-Chicago, is taking the attitude that the General Assembly approved a budget plan at the end of May. They say there has been no progress toward negotiating a compromise to determine where cuts should come, therefore there is nothing for the Legislature to do this week.

BLAGOJEVICH DOES HAVE the authority to force the Legislature to convene at the Statehouse. But once they are in the building, it is their leadership who will determine what (if anything) they actually do this week.

Some have speculated that Madigan could actually use the time at the Statehouse to begin the procedural maneuvers needed to impeach a governor.

Impeachment of a governor as political payback for trying to embarrass the Legislature – even by Chicago politics standards, I find it absurd.

That’s all any move by Madigan at this time would be. I’d like to think the three-decade veteran of the Illinois House from Chicago’s Southwest Side would be enough of a political professional to realize how stupid such a maneuver would be.

BUT THEN AGAIN, it would be totally within the “Chicago rules” mentality of politics where cheap shots are permissible for legislators to use the threat of impeachment as a sword hanging over the head of Blagojevich, threatening to impale his professional legacy for good if he doesn’t quit being so ridiculous when it comes to the budget mess that exists now.

Basically, the Illinois political geeks have until Wednesday or Thursday to figure out something – or else rules that restrict government spending without a budget in place will take effect, and state employees who perform valuable services for the people of Illinois will stop getting paid for their work.

This situation could be averted if Blagojevich were to use his authority to impose cuts to the Legislature-approved budget. In fact, he has threatened to do so, suggesting cuts to programs that are pet projects of several high-ranking legislators.

The Legislature, in theory, could come back during their fall session and override the cuts, but a balanced budget would be in place until then. We the people of Illinois would be able to go through the summer and into the autumn months with a dysfunctional, but functioning, state government.

IF THAT MEANS Blagojevich will make a few enemies in the process by cutting somebody’s pet program, he ought to take consolation in the fact that he would not be any more unpopular than he already is now.

But persisting with this talk of trying to “shift blame” to the Legislature, and thereby instigating the “political animal instinct” that would want to go for the kill and use impeachment as a weapon; that is a bad direction for Illinois to move in.

The “shame” I would feel watching my state’s elected officials engage in such behavior literally would be the same that I felt back in 1998 when Congress persisted in going after President Bill Clinton.

Sure enough, they impeached him. He will forever carry that tag as part of his legacy (along with President Andrew Johnson).

BUT THE PEOPLE of the United States saw through the partisan attacks, which is why the mood of the country never got behind the issue. And for those who want to screech that Bill Clinton was impeached, keep in mind that he was also acquitted.

As in, he was found “not guilty” of the “high crimes and misdemeanors” for which the Republican majority of the Congress at that time wished to remove him from office.

I could easily see something similar happening in Illinois, if our elected officials persist with talk of impeachment.

Either way, the people of Illinois lose.

EDITOR’S NOTES: Threats of impeachment have come up as retaliation for Gov. Rod Blagojevich trying to pressure the (http://www.southernillinoisan.com/articles/2008/07/03/front_page/24983954.txt) General Assembly into taking blame for the budget shortfalls that exist.

The General Assembly’s battles with Blagojevich related to the (http://www.suntimes.com/news/politics/1036343,blago070308.article) 2009 fiscal year budget will culminate this week.

Hoosier voters likely are laughing their heads off at Illinois’ predicament these days, what with our state seriously (http://www.nwitimes.com/articles/2008/07/03/news/illiana/doc51b01c461fc091cd8625747a00802adf.txt) considering impeachment of a governor for the first time ever in Illinois history.
Posted by Gregory Tejeda at 12:01 AM

One might think that being charged with a felony by a credible witness under oath in a Federal Case would at least make you scratch your head, Greg.

If taking bribes in exchange for political appointments is not grounds for impeachment, then what is?

"Mere incompetence by Milorod (or petty jealousy on the part of the electorate that would have preferred to have someone else win either of the two gubernatorial elections held in this century) is not a good enough reason to taint the reputation of Illinois."

Isn't our reputation already tainted from past govenors - to current govenors. The only state with more govenor publicity than ours is California and that's because their govenor is famous and in my personal opinion a hell of a lot better. In addition...how many states close down state parks...and just a thought...none of them in Chicago? How much money does he spend on his jet to fly back and forth from springfield to chicago. I'm a social worker and I say at least let us use the govenors mansion to house the homeless if he's too good to stay in it. Maybe someone too good for the state, shouldn't govern the state. I agree - impeachment or not...bad apple here for govenor.