Considering how little many people pay attention to their surroundings, it is a wonder that incide 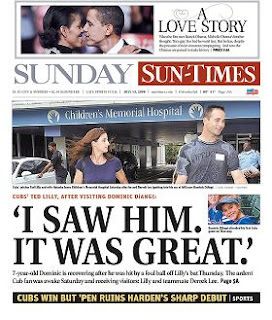 nts such as what befelled Dominic DiAngi do not occur more often.

For those of you who haven’t paid attention, DiAngi is the 7-year-old boy from suburban Frankfort who got hit in the skull by a stray baseball that was hit into the stands at Wrigley Field during a ball game last week.

ALTHOUGH HE INITIALLY was in a doctor-induced coma, Dominic is now out of the intensive care unit of Childrens’ Memorial Hospital, and some medical officials are hinting the boy could be released from the hospital some time this week.

The boy is like many other kids of suburban backgrounds these days, growing up watching ballgames on television when the parents finally decide to treat their child to a live game.

Hence, last week Thursday was the first time Dominic was ever in the stands at Wrigley Field. In a sense, he got hit by the million-to-one shot, as a foul ball off the bat of Cubs pitcher Ted Lilly went right to him.

Because it was hit so hard and likely reached his seat within one second, he never had a chance to get up his gloved hand and catch the ball for a souvenir – which would have made for the once-in-a-lifetime story for a baseball fan (catching a ball the first time ever in a ballpark).

TOO MANY PEOPLE are fooled by all the ridiculous rhetoric about baseball being a pastoral game played on a bright green pasture at a relaxing pace. Baseball is actually a game of split-second decisions where every player on the field and in the dugout (and the umpires working the game) are at risk of getting felled by a hard-hit ball.

And now, as evidenced by Dominic DiAngi, we see that the fans are also at risk.

It is the reason why I mock anyone who insists on bringing their cellular telephone to a ballgame. These knuckleheads ought to be paying attention to the activity on the field instead of talking to someone on the telephone.

Not just because of the chance of seeing some “athletically historic” moment take place, but because you never know when a ball will suddenly be sent rocketing toward your head, or a piece of a ballplayer’s bat will break off and go into the stands.

THERE’S ALSO THE often-occurring instance of a foul ball that heads toward the stands, but a heavily-padded and masked catcher thinks he has a chance to get to the ball before it goes into the seats.

If you, the fan, are not careful, you could have a 200-pound ballplayer come crashing down on top of you, and you could be the one who gets hurt.

Just what can be done about this?

Probably nothing. In the old days, ball clubs used to print on the backs of their tickets some legalese language that was meant to imply that a fan was fully responsible for any injuries caused to himself (or herself, I shouldn’t be sexist) while watching a game. Various court rulings in recent years have found that ball clubs share some responsibility toward keeping their fans safe from stray balls and bats and any other activity that spills over from the playing field into the stands.

THERE’S ALSO THE fact that, particularly for those fans who pay the big bucks (or have connections to corporate interests that pay for the tickets) to sit in the prime seats so close to the field that ridiculously close access to the ballplayers is part of the charm of going to a game.

Yet being so close to the field also means you are putting yourself in the firing line to get hit by a stray ball. Those people are the ones who ought most to be paying attention to every single pitch.

A lot of kid ballplayers can remember being told by irate “coaches” (a.k.a., frustrated insurance salesmen who took out their life’s failures on their youthful ballplayers) to, “keep your eye on the ball.” That line got repeated so much that it is a cliché.

Yet it also is a truthful statement for fans, particularly if you get into the good seats. Some fool sitting in the top of the center field bleachers at Wrigley Field (or in Section 538 at U.S. Cellular Field) can get away with missing a pitch or two, knowing the action is over 500 feet away.

BUT A FAN in the first or second row right by the dugouts ought to keep in mind that she (or he) is sitting less than 100 feet from the batter, which is about the same distance as the first or third basemen are.

Even if you are in the 20th row from the field (which is where DiAngi apparently was sitting on Thursday), you are still a lot closer to the hitter than the middle infielders or the outfielders.

Basically, too many people behave as though there’s some magical force field separating the playing field from the stands that will offer them protection. There isn’t.

I remember attending one game at Elfstrom Stadium (the Geneva, Ill.-based home of the Kane County Cougars of the Midwest League) where my brother and I had third base right in front of us about 50 feet away. My brother joked that he could coach third base from his seat.

IT ALSO PUT us right in the firing line so that I was never more away of the location of the ball in that game than any other I have attended. I would have wanted to duck (knowing full well that sticking my bare hand out to catch a foul line drive would have more likely broken the bones of my hand).

The reality is that there is only so much a ball club can do to shield the fans from on-field activity. When I attended ball games at Peoria’s old Vonachen Stadium, I thought it ridiculous that they stretched the backstop screen around the field for the entire length of the first- and third-base stands. Everybody in the 5,000-seat stadium had a piece of screen offering minimal protection.

But now, the logic behind that ought to be apparent, although there’s no way one could do the same with either of the stadiums used by Chicago’s major league teams.

SO WHAT SHOULD we learn from the tale of Dominic DiAngi?

There probably are places where it is not safe to sit if you are taking a kid to a ballgame. I remember one of the most reckless things I ever saw was a young couple taking their one-month-old child to a White Sox game against the Boston Red Sox.

It was cute that they brought the camera and got pictures of him sitting in the stands while wearing a White Sox shirt and Red Sox cap (when I asked, I was told that a Boston guy fell for a South Side girl). But sitting as we were five rows up from the field right behind the third base dugout, that boy could have easily become a disastrous story.

There also are times to forget about the hot dog vendor or the yahoos around you who want to start “the wave” (if there was any cosmic justice on this earth, those would be the only people getting hit in the head by a stray foul ball). You go to a game, you watch the game.

AND KEEP IN mind that the odds DiAngi overcame to get hit by the ball are astronomical. I have attended professional ballgames (major and minor league throughout the Midwest) for more than three decades.

The closest I have ever come to having a stray ball come near me was about 15 feet -- which means I got a close-up view of two drunken meathead fighting over which fool caught the foul ball.

EDITOR’S NOTES: Dominic DiAngi’s injury helps put it into proper perspective that a Chicago Cubs loss (http://sports.espn.go.com/mlb/recap?gameId=280710116) is not that big a deal.

Cubs pitcher Ted Lilly and first baseman Derrek Lee visited DiAngi Saturday at the hospital (http://www.upi.com/Top_News/2008/07/13/Cubs_stars_visit_boy_injured_by_foul_ball/UPI-91721215966357/), providing a pleasant aspect to what could have been a scary childhood memory.
Posted by Gregory Tejeda at 12:01 AM

Well democrats, Time to outlaw baseball (too dangerous for the public).