I understand Barack Obama is no longer just a junior senator from Illinois; he’s a man of the world (literally, a new Gallup Organization survey showed at least 60 percent of Europeans feel they have a stake in his election as U.S. president).

I also realize the Illinois State Fair has all the characteristics of a third-rate production that is best ignored, if at all possible. Many counties across Illinois, as well as the states that surround the Land of Lincoln, put on more extravagant affairs than what will take place in Springfield come mid-August.

YET I AM hoping that Obama can somehow configure his campaign schedule to be in Illinois come Aug. 13 – which is the day during the Illinois State Fair when Democrats are scheduled to hold a series of events meant to promote their electoral candidates.

As things stand now, the highlight of Democrats Day/Governor’s Day is that New Mexico Gov. Bill Richardson will make the trip from his capital in Santa Fe to our capital in Springfield – speaking at a breakfast session being held for the Democratic Party’s county chairmen from rural Illinois.

Considering Blagojevich’s lack of popularity in the Illinois capital city, his presence will not be a big deal. In fact, it could be little more than an excuse for hecklers to exercise their vocal cords. 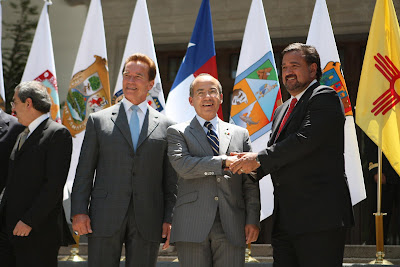 So if Obama doesn’t show, the Democratic Party’s presence at the Illinois fair will have to rely on a man with no local ties in order to have any sense of political glamour.

OBAMA HAS BEEN invited to the event, and it is traditional that the Democratic U.S. senators from Illinois would appear at the various rallies held at the fairgrounds – if not to promote themselves, then to give other Democrats running for office a chance to have candid photographs taken of them reveling in the glitz of Obama-mania.

Sen. Richard Durbin, D-Ill., has already committed to appearing at the event. Of course, he’s a Springfield resident. He has no excuse for not showing up at the fairgrounds.

I would hope Obama doesn’t pull some sense of Chicago snobbery in deciding to blow off the fair on Democrat Day.

If anything, it would be a chance for the people of the part of Illinois outside of Chicago to feel like Obama has not forgotten they exist. Can anyone even remember the last time his campaign took him to somewhere in rural Illinois?

IF MY MEMORY is correct, it was when he made a brief appearance in Quincy when the flooding along the Mississippi River was at its peak. That was a moment that will live on forever in the memories of those emergency crew workers who were present at the time, but it’s hardly the feel-good moment that Obama ought to be trying to create for all Illinoisans.

Besides, I would think Obama would want to play up a chance to make an appearance or two with Richardson, who after his own presidential aspirations fizzled out endorsed Obama at a time when primary opponent Hillary R. Clinton was still a viable option.

Some have speculated that Obama will use the Richardson endorsement to try to appeal to the growing Latino voter bloc in this country, but it might actually make more sense to try to appeal to those establishment Democrats who would want to support officials with experience in federal government.

Richardson, after all, is the former energy secretary and U.S. ambassador to the United Nations under former President Bill Clinton.

A JOINT APPEARANCE between the two at the party chairman’s breakfast would give an event that theoretically is for the have-nots of the Illinois Democratic Party (the haves are all from Chicago) a jolt of excitement. It would give the rural Illinois Democrats their moment in the sunshine.

And just think of how kitschy it would be if Richardson managed to stick around Springfield for a few extra hours and partake of some of the fair’s events. The Obama-Richardson duo could do the fairgrounds, checking out the various exhibits and livestock shows.

It’s just too bad that the Democrat Day political events take place a couple of days after the hog- and husband-calling contests that have become a state fair staple.

For those who are not in the know about the fair, women get the chance to parody the hog calls used by farmers, bellowing and shrieking for their husbands to hop to it and come.

COULDN’T YOU JUST imagine the look of bewilderment on Richardson’s face (just a few days before presiding over a special session on universal health care) if he got to see Michelle Obama taking her crack at devising a unique call for her husband?

EDITOR’S NOTES: The Illinois Democratic County Chairmen’s Association breakfast on Aug. 13 in Springfield (http://www.sj-r.com/news/x209775847/Richardson-to-address-Democrats-here) has the potential to be one of the biggest campaign events Illinois will see this year, if Barack Obama can bring himself to include Illinois in his campaign schedule.

Bill Richardson all by himself in Springfield, Ill., barely warrants this mention in the (http://www.chicagotribune.com/news/chi-ap-il-richardsonspeech,0,2557294.story) Chicago press.