How much do TV entertainment programs influence our political viewpoints?

Does this mean Dennis Haysbert beats Geena Davis when it comes to public influence?

That was my reaction to reading a recent (ugh) Ass 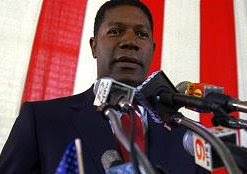 ociated Press story where Haysbert, the actor who played an African-American U.S. president on the television program “24,” says he thinks his role made the public comfortable with the idea of a black man in the position of Commander in Chief.

WHAT MAKES ME find that odd is that I remember the same kind of talk a couple of years ago when Geena Davis had the lead role in the short-lived television program “Commander in Chief” – where she played the role of an academic-turned-vice president who rose to the top spot when her social conservative boss (the president himself) died.

That show tried to give us Republicans as the embodiment of all that is evil and unholy, constantly plotting (unsuccessfully) to take down Davis’ presidency.

I can remember the same kind of talk, that Davis was laying the groundwork for Hillary R. Clinton’s presidential aspirations. Some Republicans went so far as to take this talk seriously, complaining back then that Donald Sutherland’s conniving depiction of the leading Republican in Congress was hurting th 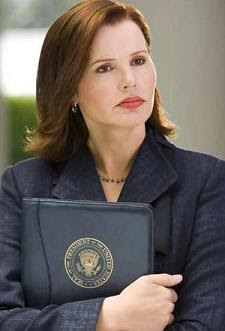 em, and making the thought of Davis/Clinton seem too appealing.

Of course, that show didn’t last.

SOME MIGHT SAY it was because those conservatives plotted to take down its ratings so as to avoid helping Hillary. The reality is that it was just a poorly written television program, particularly as its one season progressed. Trying to tell stories of government intrigue that get wrapped up in happy endings (for Davis and Democrats) in one hour involves gross oversimplification of reality.

By comparison, “24” was a hit program for the Fox network, what with its action and drama. It was the perfect television antidote for people who want to watch TV to forget the problems that confront them in the real world.

But I’m skeptical that anyone seriously watched either of these characters and was influenced as to how to react to electoral politics.

When it comes to issues of public affairs, broadcast media are best at reinforcing already-existing attitudes. People who will see a black man playing the part of a president on television will either already feel sympathetic to the notion, or will be repulsed enough that they will add the program to their list of examples of how “the media” is out of touch with reality.

BY THIS LINE of logic, perhaps we need to start thinking of comedian Chris Rock as some sort of political pioneer. After all, he played the part of a hip-hop influenced U.S. president in the 2003 film “Head of State.”

Actually, there is one cinematic portrayal of a black “man” as president that I would like to see, just to find out for myself how the buffoonish racial views predominant decades ago were handled.

The thought of a 7-year-old Sammy Davis Jr. in the title role of “Rufus Jones for President,” about a child who gets elected to work in the White House makes me wonder if we would have had a youthful Frank Sinatra as Secretary of State and the rest of the Rat Pack taking over on Pennsylvania Avenue.

If that thought sounds silly and trivial, it really is no more ridiculous than the thought that the people are being swayed on their beliefs by entertainment programs in general. It is the change in attitude that comes first, then the entertainment industry follows. Thinking that television is plotting to tell you who to vote for is as absurd as believing that fluoride in drinking water is a Communist plot.

PEOPLE WOULDN’T HAVE reacted to Haysbert’s character unless they already had it somewhere inside them to be sympathetic. The show just gave them a vehicle to express their beliefs.

If anything, Haysbert’s greatest contribution to the concept of an African-American male (or even a bi-racial man like Obama) serving as president was the one he made by opening his checkbook.

The actor who now stars in the television program “The Unit” and is remembered by some bad movie buffs as the voodoo-practicing Cubano ballplayer from the “Major League” films is one of many who helped build up that massive campaign fund that gives Obama such a major strategic advantage over opponent John McCain.

And for the record, Haysbert kicked in for $2,300 – the maximum donation allowed by federal law.

EDITOR’S NOTES: Actor Dennis Haysbert says he still gets people walking up to him (http://www.suntimes.com/entertainment/television/1035921,haysbert070208.article) on the street asking him to run for president.

Geena Davis’ role as a female president in Commander in Chief was the perfect example of a program that started out interesting, but lost so (http://www.washingtonpost.com/wp-dyn/content/article/2005/09/26/AR2005092601810.html) much momentum that we couldn’t wait for the show to be cancelled – which actually is a perfect metaphor for the Hillary Clinton campaign of ’08.

This “ancient” commentary still has some relevant nuggets with regard to the influence of racial matters (http://www.npr.org/templates/story/story.php?storyId=6594955) in the presidential campaigns.
Posted by Gregory Tejeda at 12:01 AM