Does BHO have the same aura as JFK? 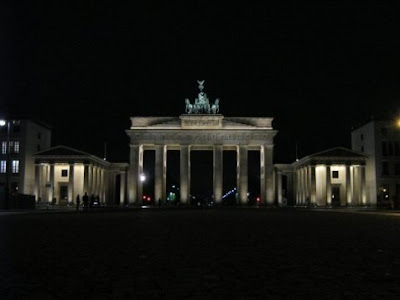 Barack Obama would like to use the Brandenburg Gate, built originally as a monument to peace, for an address that would have his presidency work to bring the world together as one. Could such noble rhetoric be beyond Obama's political skills? Photograph provided by http://www.berlin101.com/
At what point do we start lambasting likely Democratic presidential nominee Barack Obama for relying too heavily on the imagery of John F. Kennedy for the background of his presidential campaign?

To me, that point was reached when Obama made it known he wants to make an appearance at the Brandenburg Gate in Berlin – which brings to mind two of the classic U.S. presidential sound bites of the past 50 years.

NOW I KNOW there are the people who insist that John F. Kennedy’s sense of the German language was flawed when he tried to identify spiritually with the Berlin people then living under the heavy hand of Communism, causing him to refer to himself as a “jelly-filled doughnut.”

Also, Kennedy technically spoke that classic “ich bin ein Berliner” line at a different location in West Berlin, before visiting the gate that overlooked the infamous (and now non-existent Berlin Wall), separating west Berlin from east, and capitalism from Communism.

But in the way that people tend to lose track of details and rewrite history to tell a better story, Kennedy had the gate’s chariot of victory looming over his shoulder when he spoke his line.

OBAMA WOULD LOVE to be able to play off the imagery to give his presidential campaign its own memorable moment. The problem is that it is starting to seem like overkill, the way that so many Kennedy/Obama allusions can be drawn.

First and foremost is the fact that the Kennedy family survivors are backing Barack – from “Uncle Ted” to JFK daughter Caroline Schlossberg. He’s even got California first lady Maria Schriver (the niece of JFK, although her husband, Gov. Arnold Schwarzennegger, is backing McCain) on his side.

Former first daughter Caroline will have her own lasting influence on an Obama administration, as she is helping to go through the records of prospective running mates to find the perfect political companion to Obama as vice president. It probably is her Kennedy heritage that has kept her from the abusive rhetoric Republican activists have come up with for all the other people who are helping to “vet” V-P’s. Aside from the Kennedy relatives, Obama plans to stage his speech in August accepting the Democratic nomination for president from a massive football stadium (Invesco Field in Denver), similar to how Kennedy took the 1960 nomination during a rally at the Memorial Coliseum in Los Angeles.

EVEN SOME OF Barack’s rhetoric is Kennedy-esque, in large part because of the presence of Theodore Sorensen, the JFK speechwriter who has become an adviser to the Barack Obama campaign.

When piled on to that mound of Kennedys, a trip to Brandenburg Gate seems like overkill. While Obama would love to be able to play off the imagery to give his presidential campaign an international affairs boost, I can’t help but wonder if he will get more criticism than praise for relying so heavily on a JFK-influenced moment.

The Berlin trip is expected July 24, and is part of an tour that will take him through Europe and the Middle East (including Iraq) to try to create the notion that he fully understands international affairs – one area where some would-be U.S. voters think the junior senator from Illinois is lacking.

I say “some” because “international experience” is defined differently by different people.

A POLL COMMISSIONED last month by the Associated Press showed that 61 percent of people surveyed thought McCain would make a better military leader than Obama (who had the backing of 27 percent).

It all comes down to how significant one thinks the role of a U.S. senator is. Does McCain have more experience because he has been a senator for decades, compared to the man who has four years in the Senate, nearly eight years in the Illinois Senate and a couple decades of experience as a community organizer on Chicago’s South Side?

The reality is that any member of the U.S. Senate is a “follower” when it comes to international experience. They get special briefings and the chance to take trips to the world’s “hot spots,” but ultimately do nothing more than vote on proposals put together by experts in world affairs. Neither Republican McCain nor Democrat Obama has an innate understanding of the world that gives either a true advantage.

THERE'S JUST ONE aspect of the use of the Brandenburg Gate (which has some German officials concerned that they would be perceived as taking sides in a U.S. presidential election) that I find ironic.

Some of the news coverage I have read of Obama’s desire to campaign there barely mentions Kennedy. Some (likely written by a younger generation of reporters) ignores him altogether.

For the gate was also the proper site of one of former President Ronald Reagan’s great rhetorical moments, when in the mid-1980s he urged the Soviet Union to apply political pressure to the Communist government of East Germany to end their isolation from the rest of the world, particularly through demolition of the Berlin Wall.

“Mr. Gorbachev, tear down that wall,” coming from the mouth of Reagan is one of those moments that, to a younger generation, sticks in their minds more than old archival video of John F. Kennedy, particularly if those individuals are clueless in their knowledge of history.

OBAMA LIKELY IS hoping that the older generation (many of whom were devoted to the presidential aspirations of Hillary R. Clinton during the primary season) will think of Kennedy (and not Reagan) when he makes his appearance.

The problem is that truly memorable political moments cannot be staged. They happen by capturing the public imagination. It is impossible to predict what will be historic and what will be remembered.

It is very possible that Obama will flop while standing in front of the Brandenburg Gate. If he does not say something particularly inspiring, his reputation will be matched up with that of Kennedy and Reagan and he will come off as falling short by comparison.

It also is true that even people with great rhetorical skills have only one or two truly great moments in their professional lives. Obama may have used his moment up in 2004 at the Democratic National Convention when he told the crowd of John Kerry supporters, “there is not a liberal America and a conservative America, there is the United States of America.”

EDITOR’S NOTES: Theodore Sorensen recalls his former boss and the similarities to his (http://www.guardian.co.uk/commentisfree/2007/jul/25/obamathenextjfk) current boss.

Barack Obama is including a Berlin visit during his European/Middle East tour this summer (http://www.msnbc.msn.com/id/25428793/) that is meant to bolster his knowledge of world events.

Is the Brandenburg Gate more reminiscent of John F. Kennedy, or Ronald Reagan (http://www.telegraph.co.uk/news/newstopics/uselection2008/barackobama/2270372/Barack-Obama-to-be-granted-JFK-moment-with-Brandenburg-Gate-speech.html)?
Posted by Gregory Tejeda at 12:01 AM