What to get Obama for his birthday? He wants cash, as in campaign contributions

By the time you read this, Barack Obama will have slipped into and out of Chicago.
He celebrates the big 5-oh on Thursday, officially having been alive for half a century. But the public portion of his birthday celebration was done last night at the Aragon Ballroom.
IT WAS A concert. Obama himself returned to his home city to make an appearance at the concert – which featured such Chicago-native talent as Jennifer Hudson and Herbie Hancock.
Yet before anyone gets the impression that Obama is a man of the people who likes to party hearty, keep in mind that this was a political event just as much as any other he would have attended.
For the tickets to get into the Wednesday night fundraisers went from anywhere from $50 each to $35,800.
People who paid the top price were provided with some food and also likely had some direct access to the president himself. People who paid a little less probably can say they were in the same room with Obama, and saw him in the flesh – but didn’t get any chat time with the Leader of the Free World.
AND IF YOU were cheap enough to shell out merely $50, it means you can say you were in the same building as the president – but you didn’t get anywhere near to him.
Which means you might as well have been one of the masses around the country who took part in what were called “grassroots meetings” that allowed people the chance to pretend they were celebrating the anniversary of the date on which Ann Dunham in Honolulu gave birth to a son by her collegiate boyfriend (Does anyone still seriously believe that’s not true?).
If it sounds like I’m mocking the Aragon event and the smaller meetings, well actually I am.
﻿
﻿

Somewhere in my collection of tacky junk I have accumulated from political people throughout the years is a birthday party “invitation” from then-Gov. Jim Edgar.
THIS CARD WAS issued to announce a very similar event – a reception held at the Illinois State Fairgrounds meant to celebrate Edgar’s 50th birthday (he turned 65 two weeks ago). I kept the card because of the photograph on the front – an old childhood picture of Edgar, wearing pajamas with the name “Jimmy” printed all over them.
Yet when one looked closely at the card, it was merely an invitation to a political fundraiser. Pay some money, and you can be “included” in the Edgar birthday festivities.
Which was a similar situation to what took place Wednesday night in Chicago for Obama -- although I'm sure the passage of time and inflation and scale of elective office means that Obama was shooting for much more cash than anything Edgar ever hoped to raise that night some 15 years ago.
Barack endured the company of all those people Wednesday night out of a professional obligation. He was raising the money that will help him get re-elected president in next year’s election cycle, and also will help others raise money so that they can get re-elected as well.
IF ANYTHING, THE latter function might be more important. Obama needs allies in government if he’s to be able to accomplish much of anything (I’d say he needs friends, but a political “friend” is really something cheap and worthless – even more-so than a Facebook “friend”).
Political allies come at a price. What did Obama do to help them get elected? Help with finances usually is a good start.
That is what Wednesday night was truly about. It certainly wasn’t about any legitimate birthday celebration – which I would guess Obama will do in the comfort of the White House on Thursday (although I understand there was also an after-concert dinner for up to 100 Obama backers, which also had its political motivations).
Which is why I was somewhat amused to see that the Republican National Committee felt the need to publicly criticize Obama for partaking in a birthday celebration event in Chicago.
“I SUPPOSE THE White House is thinking (Obama) should stick to the part of his job he really likes,” was what came from the lips of a GOP spokeswoman. 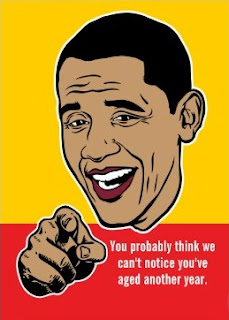 The last I knew, fundraising was a legitimate (and essential) part of any elected official’s job, which makes the spokesman’s statement sound like sour grapes that she wasn’t invited to the birthday celebration event.
I only wish these could be billed purely as fundraisers, instead of pretending there was a human touch to the events, such as those people who will now claim that the Aragon Ballroom’s “history” includes a presidential birthday concert.
Actually, I can’t help but think there could be one sure-fire way to raise money with minimal effort off of an Obama birthday tie.
I COULDN’T  HELP but notice a week ago when I shopped for a birthday card for my father the large number of holiday cards that depict Obama, usually offering up some pseudo-holiday greeting.
I’m sure the people using those Obama images are coming up with stock photos or generic drawings for which they don’t have to pay the president a dime. Just think, however, of how much revenue could be generated if every single purchase of such a card kicked in a dime to the campaign coffers?
-30-
Posted by Gregory Tejeda at 12:01 AM