I have to confess. 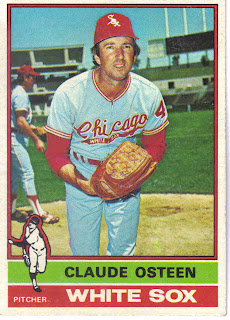 When I first heard early this year that U.S. Cellular Field was going to feature nationally renowned (in certain circles) televangelist Joel Osteen at a religious rally to be held Saturday, my first thought was to wonder if the Houston pastor was in any way related to Claude Osteen – the long-time major league pitcher whose career ended with the Chicago White Sox.
FOR THE RECORD, he isn’t.
But that doesn’t change the fact that Saturday could well be the most significant night of all the events to be held at 35th Street and Shields Avenue (a.k.a., Bill Veeck Drive) during 2011 – except for those who think ballparks are “holy” shrines because professional ballplayers play there.
Of course, that is more of a reflection on the fact that the Chicago White Sox have been a disappointment this season (and not just because they recently got swept four straight by the New York Yankees). The baseball being played this year isn’t worth remembering much.
So the fact that Osteen (the pastor, not the pitcher) is using U.S. Cellular Field as part of his national tour this year is something worth noting. Somehow, I get the sense that a crowd of about 40,000-plus filling the stadium to capacity will create a religious vision.
IT PROBABLY WILL be something that all of those in attendance will remember for years to come. 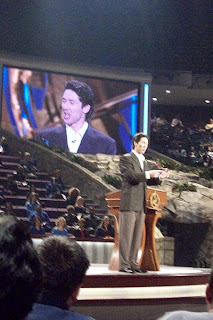 It probably won’t be of the same significance as the Catholic masses that various popes have conducted at Yankee Stadium in New York.
But then again, Osteen has conducted his own mega-services at Yankee Stadium and Dodger Stadium in Los Angeles. Which puts U.S. Cellular Field into a certain elite category.
Now I know there are those people who are getting offended by Osteen’s presence. I have seen some Internet commentary that wants us to think of Osteen as some sort of cult leader along the lines of the Rev. Sun Myung Moon.
IN FACT, THEY take offense in the fact that Osteen uses secular venues (this year’s tour alone will include appearances at New York’s Madison Square Garden, in addition to the former New Comiskey Park) to hold his large-scale religious services.
But then again, Osteen is the pastor of the Lakewood Church in Houston – which purchased the old arena used by the Houston Rockets pro basketball team. It means that Osteen is used to having a 16,000-seat arena to fill on a regular basis.
So I’m sure a part of him will think of Saturday’s sermon as just another routine performance.
Is he a cult leader? I don’t know enough about Osteen to say if such attitudes about the “Night of Hope” events being held across the country are warranted, or not.
BUT IF SATURDAY night is truly a cult rally being held on the Sout’ Side, then it will be a night to remember.
Which might be ever so ironic because Osteen’s appearance comes merely one week after what is likely the most significant event to take place this year at Wrigley Field – one which also had nothing to do with the baseball being played on the field.
Of course, I’m referring to the concerts given last weekend by Paul McCartney, with the big video screens erected in what usually passes for center field.
It allowed all the 60-plus crowd to pretend they were still youthful and hip, while also giving us all a chance to reminisce about back in 1964 when the Beatles themselves included Chicago (Comiskey Park, actually) in their musical tours of the United States.
IT SAYS SOMETHING about how dismal 2011 has been athletically when these concert-type events are the highlights of the year at the ballpark.
But I can’t help but wonder how much crossover there is in the crowds that gathered last weekend at Wrigley Field and those who will be at U.S. Cellular Field on Saturday.
Will we have two completely separate segments of Chicagoland ? Or is there some room for overlap between those who reminisced on the North Side, and now want to save their souls on the South Side.
And just to state for the record, I wasn’t/will not be at either event – although I can claim family connections to both.
AN “AUNT” ON my step-mother’s side of the family (her sister) was among those at Clark and Addison reliving her teenage memories., while an aunt on my father’s side of the family will be among those at U.S. Cellular tonight. 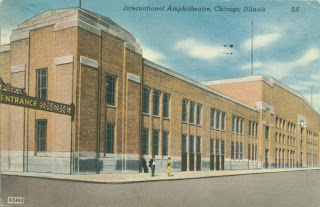 Then again, my aunt who will be seeing Osteen tonight was a Beatles fan when she was young. If my memory is correct, she was a “Paul” fan. But she attended the Chicago Beatles concert held at the old International Ampitheatre.
Otherwise, maybe she’d be the perfect example of symmetry – a Chicagoan who could truly appreciate both events.
-30-
Posted by Gregory Tejeda at 12:01 AM