The Chicago Cubs erected a new statue Wednesday outside their ballpark – meaning that the image of one-time third baseman and radio broadcaster Ron Santo will join the ranks of people like Ernie Banks, Billy Williams and Harry Caray. 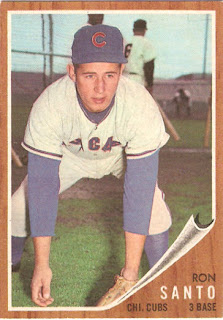 Yet I can’t help but think that the efforts to pay tribute to their one-time infielder who died last year due to complications related to diabetes will become more interesting on Thursday.
FOR THIS IS the day that Santo’s family will take his cremated remains and scatter them.
Where?
At Wrigley Field, on the playing field. Specifically in the area near third base – where Santo patrolled the infield back in the 1960s.
So in a sense, Santo will now become a permanent part of the site that for the past 95 years has been the home of Chicago Cubs baseball. Santo’s essence will remain there.
ALL OF THIS makes me wonder if we’re now going to get people whose Santo love will be so intense that they will try to find ways to get onto the playing field.
I once heard of an older-generation Chicago White Sox fan who, the one time he got onto the playing field at Comiskey Park, insisted on roaming around second base because that is where Nellie Fox played back in the 1950s.
And Fox doesn’t claim his burial place at Comiskey, the way that Santo will now be able to claim Wrigley as his final resting place. 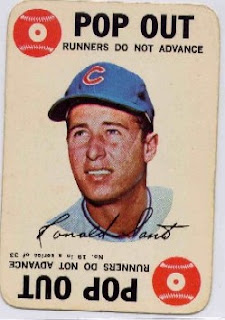 Perhaps it is a bit macabre. But then again, I’m sure there are other people who will find the idea totally appropriate.
FOR ALL I know, they probably think they should have been allowed to sit in the stands while Santo’s relatives scattered his ashes (my understanding is that the family moment will truly be personal – and private) on the infield.
But then again, he won’t be alone. I understand that throughout the years, there have been many people whose families have wanted their loved ones’ ashes scattered in a ballpark. 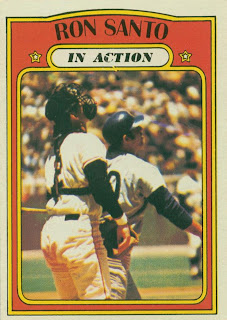 Although usually, it is just overly-intense fans who seek this, and not the ballplayers themselves.
Which will make Santo unique. His remains will be surrounded by the remains of many Cubs fans – whose eternal souls are probably now elated at the thought that they have something in common with a real-live Chicago Cub.
IT HAS ME wondering if The Dead Ball Era (a website devoted to the final resting places of major league ballplayers) will now start including Wrigley Field references when they write of Santo.
I only hope we don’t someday see something as morbid as someone getting onto the Wrigley Field playing field, digging up the soil around third base, then trying to sell it off by claiming it has the “essence” of Santo.
At the very least, I would hope e-Bay would have the sense to reject such an item, and that no reputable auction house would allow the thought.
So after Thursday, Santo’s remains will be a part of the Wrigley Field grounds. He’s going nowhere (removing him would be next to impossible).
BUT LET’S BE honest. No matter how much some Chicago Cubs fans want to think otherwise, the day will come when Wrigley Field is no longer the home stadium of the Cubs.
It may be a few decades from now (I expect the Cubs in the near future to attempt a renovation to keep the building functional for at least another 30 years), but the Cubs will someday play games elsewhere. 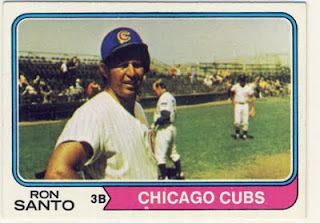 That will mean that Santo’s remains will remain. Who’s to say what will someday exist at the Lake View neighborhood location.
Which could mean that Santo’s ultimate eternal fate will be to have asphalt on top of him, just like everybody who ever had their ashes deposited on the playing field of the former major league ballpark that existed on the north side of 35th Street at Shields Avenue.
-30-
Posted by Gregory Tejeda at 12:01 AM

Nothing new here. Cremains have been scattered at both Chicago ballparks for years, but oftentimes without much fanfare.

Former Cubs player and manager Charlie Grimm's ashes were scattered at Wrigley Field many years ago.

Privately, the White Sox have even sometimes allowed a select number of former fans to have their ashes scattered.