Will we react in time to save Cairo?

I have never set foot in Cairo, Ill. That town at the far southern tip of the state where the Mississippi and Ohio rivers converge and where one literally is seven miles closer to Jackson, Miss., than they are to Chicago.
And now, I’m wondering if I’m never going to get the chance.
WILL IT TURN out that the time I was in Tamms, Ill., (about 12 miles to the north of Cairo), I will be able to claim I was in what will become the far southern tip of Illinois?
The aging southern city that resembles a ghost town in many parts is getting hit with heavy rains that are causing the two rivers that are the sole justification for its location to rise higher and higher.
The Ohio River at Cairo reached record-high levels on Sunday, and officials say it will continue to rise. Which has people thinking it is just a matter of time before the levees will give way and the rivers will wash away the city of some 2,800 people.
That has the Army Corps of Engineers thinking that the solution to the problem is to blow a hole in the levees that protect the Missouri side of the river from flooding. By letting farmland along the river overflow with water, they think it would ease pressure enough on the Cairo levees so that they will hold – and Cairo will continue to exist. 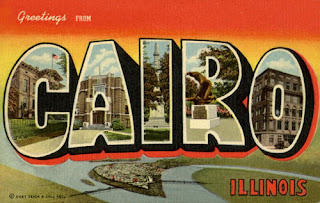 THE PROBLEM IS Missouri political people, who are determined to drag this issue out in the courts – even though the federal district and appeals courts have both upheld the desires of the Army Corps of Engineers as being justified and, quite possibly, the best way to cope with an ugly situation.

Missouri officials on Sunday tried unsuccessfully to get the Supreme Court of the United States to take the case under advisement, which meant that the Illinois attorney general’s office was busy this weekend trying to fight off the legal stalling tactics so that preventative action can occur.
There are those who are trying to portray this as selfishness by Missouri, trying to protect farmland instead of a city with actual people – even though Cairo officials this weekend gave the evacuation order and are trying to get everybody out of the area so as to reduce the potential for casualties should the river overflow. 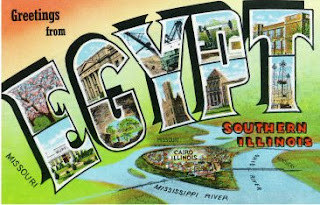 I’m not quite sure I see it that simple.
BUT THIS COULD be a case where Cairo’s history, particularly from the late 1960s when racial tensions related to the demise of segregation as an acceptable policy for life in this society, is continuing to linger in its own weird way.
The historic fact is that when it became apparent that the old ways were gone and that the white and black populations of Cairo were going to mix (actually, Cairo proper was white, while black people were expected to stay in the unincorporated community of Future City located just up U.S. Route 51), many of the white people fled the area.
That is what gives us a modern-day Cairo that is overwhelmingly African-American, and ONLY 2,831 people in size. I’m sure there are many people who are fighting the Army Corps of Engineers’ desires who simply think that the people who remain in Cairo just don’t matter.
Or that we’re doing them a major favor by encouraging them to leave and letting the river overflow into Illinois – thereby forevermore eliminating the city that once was supposed to be a major shipping port in the United States because of its location on the two major rivers.
THE NATION'S HIGH court wound up deciding not to hear the case, letting the lower court rulings remain in place and allowing this to become an issue to be considered by the Army Corps of Engineers. Let's only hope the legal nonsense ended in time – because we really don’t know how much time there is left.
Various reports coming out of Cairo indicate signs that water is somehow seeping underneath the levee, which could weaken the structure and cause it to collapse. It is totally possible that the courts could make the proper rulings to give the Army Corps of Engineers the authority to decide for themselves how to fix this mess (which is one of their reasons for existence), only to have the levee collapse just before the court ruling is made public.
Will our political people get their act together in time to fix the disaster-in-the-making at Cairo? If they don’t, I’d think it is the kind of mess that is worthy of bringing down someone’s political career – and not just Missouri House Speaker Steve Tilley, R-Perryville, for bluntly saying that Missouri farmland was worth more than Cairo people.
Because someday I’d like to be able to go down to that part of Illinois (about the only part of the state I haven’t been to) and see where the rivers come together. I’d rather be surrounded by people when I do so, and NOT the ghost town-like remains of the city that so many of us became confused about when pronouncing.
-30-
Posted by Gregory Tejeda at 12:01 AM