When is it right to “spike” the football?

It has been just over one full workweek since the moment that most of us learned that Osama bin Laden was killed during a raid on his compound in Pakistan by Navy SEALS – a fact that even al Qaeda now concedes to be truth.
﻿

During that week, I have seen people celebrate the death in public (all too similar to the despicable public displays from various Middle East cities at the thought of the World Trade Center collapsing on Sept. 11, 2001), and have also heard those who want to rant and complain about the fact that U.S. officials did not desecrate bin Laden’s body.
OF COURSE, OTHERS believe we didn’t show enough respect to the corpse – and al Qaeda officials themselves cited that fact as their justification for the retribution they say WILL be forthcoming.
Some even cite recent news reports that claim these people offering up a radical interpretation of Islam were cooking up a scheme to derail trains across the United States (including in the Chicago metro area, which is still a rail hub for the nation) on the upcoming 10th anniversary of those attacks in New York that were – for many – the first time they ever gave a thought to the Islamic faith.
There has been public argument over whether we should be able to see the photographs that were taken of bin Laden’s body just before it was given the “burial at sea” with Islamic overtones that some people say just wasn’t Islamic enough.
And we even got to see President Barack Obama appear in New York for a memorial service where we got to see him lay a wreath to the memory of those thousands of people who were killed. The result is an Obama with an approval rating that shot up as high as 52 percent; although the Gallup Organization had him falling "back" to 51 percent by Friday.
ALL OF THIS activity just makes me believe all the more that anybody who celebrated in the late hours of May 1 thinking that the “war on terrorism” is over and “WE WON!!!!!!!!!!!!!!!!!!!” was being short-sighted.
Some people in our society have been too willing to engage in knee-jerk reactions, and are going to scream when their view does not prevail.
In fact, that is why the moment this week that made me most reassured about our society was when Obama spoke. No, I don’t mean when he addressed the nation to make the initial statement that bin Laden was dead.
I’m talking about his Wednesday session when he explained why the photographs of bin Laden’s corpse (with a piece of its skull blown off by gunfire and his brain matter exposed) would remain “classified,” and therefore unavailable for public viewing.
AS MUCH AS I think information of all types ought to be made public in as many cases as possible and I’m not sure I buy the argument that the photographs would instigate religious radicals into retribution, I like the sense of calmness that Obama was trying to convey.
“We don’t trot this stuff out as trophies,” Obama said. “We don’t need to spike the football.”
It’s not like federal officials are somehow denying us details about the raid and death. It’s just a matter of how graphic they want to be.
Of course, the conservative ideologues who have always had a misguided sense of what this conflict against western society and the 21st Century is all about are the ones who want nothing more than to “spike” that football. I’m glad we’re not giving in to them – although a part of me is curious to know how long it will take for someone to get those photos and provide for their “unauthorized” publication? 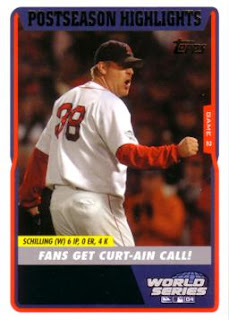 THAT SENSE OF needing to impose “shame” is ultimately what most of this week comes down to. Such as the moment when now-retired major league pitcher Curt Schilling got himself interviewed on a Boston radio station, and he complained about the fact that U.S. officials felt compelled to provide Muslim aspects to what became bin Laden’s funeral.
I don’t want to say that Schilling called for the desecration of bin Laden’s body. But hearing him complain about “political correctness” being behind the need to follow Islamic funeral rituals made me thankful that Schilling never pitched for a Chicago ballclub.
It would have to be embarrassing to think we once cheered for that knucklehead. If anything, the fact that such rituals were followed even partially ought to be seen as the sign of our society’s superiority.
We should keep in mind that there are some people who are claiming about bin Laden’s burial at sea (which really isn’t desired in Islamic faith) in order to keep a gravesite from becoming some sort of place for the crazed to worship.
NOT THAT I believe that it would have made much difference what had been done with bin Laden’s body. I’m sure the people predisposed to follow him would have found another reason to try to plot out some sort of violent act on Sept. 11, 2011 (this year, it’s a Wednesday).
After all, this “fight” is ongoing. Nothing came to an end on Sunday.
-30-
Posted by Gregory Tejeda at 12:01 AM