Pipe down, ya Miami moron!

“This ticket doesn’t just give me a seat. It gives me the right, NO, the DUTY, to make a complete ass of myself” – Homer Simpson, on the subject of sports fan behavior.
-0- 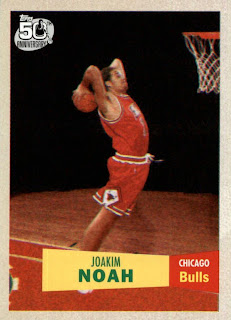 It seems way too many people who go to ballgames are taking the words of “wisdom” of Homer Simpson to heart these days. And not all of them are sitting in the stands.
How else should we regard the latest controversial incident to occur at a sports event – that of Joakim Noah’s behavior toward some loser from Miami who decided that he wanted to spend his evening at Game 3 of the NBA eastern conference finals by heckling the uniquely coiffed center for the Chicago Bulls.
WHICH IS NOT at all surprising. Some people seem to think that their attendance at a ballgame isn’t complete if they aren’t shooting their mouths off at a ballplayer. Perhaps it is their way of feeling like they participated in the event.
Because those overly-baggy jerseys they tend to wear don’t even come close to covering up the fact that they usually are way out of shape and incapable of playing the games that they’re watching – and likely think they’re experts in.
The only thing that makes Sunday’s game unique is that Noah felt compelled to respond to the nitwit who passes himself off as a sports fan.
Noah now faces a $50,000 fine from the National Basketball Association (imposed on Monday) along with some public denigration, all because he felt compelled to shout back an insult – and one that implied the  fan in question was homosexual.
FOR ALL I know, it is likely that every time somebody feels compelled to recount the Joakim Noah record as an athlete, this incident WILL be recalled.
No matter how apologetic or contrite he will be (and he did offer up an apology to the “fan” right after the game), Noah likely is going to have to deal with the perception that on some level, he hates gay people.
Which is a shame. Because in all likelihood, the “fan” in question deserved to be put in his place.
Based on the reports I have read of the incident, the fan crossed over the line from legitimate criticism to crude behavior and was going at it for hours on end. This was an idiot who likely used his connections enabling him to get a seat so close to the basketball court for a playoff game, JUST so he could behave like a boob.
OR, AS HOMER Simpson would put it, “a complete ass.”
A little bit of self-control on Noah’s part and this incident would never have happened.
Then again, perhaps that is what happens when professional athletes start thinking of themselves as an elite class – rather than just some guys who have enough of a particular sporting skill that they’ll be able to make some huge money for a few years of their lives before sinking back into anonymity like the rest of us.
Everybody is going to think the “ass” comes from Chicago, rather than from Miami or somewhere in south Florida (unless this particular “fan” made a special trip to be in Miami just for the purpose of crudely hecking Noah, in which case he’s an even more pathetic individual).
AS YOU CAN tell, I don’t think much of people who can’t figure out how to sit back and shut up at some sort of public event. Not that I expect a sports arena to be as quiet as a library should be (but often these days isn’t).
The roar of a crowd at some particularly spectacular moment, or a loud, harsh ring of “boo!!” is just as much a part of a stadium atmosphere as the “crack!” of a bat at a baseball game or the sight of the Luvabulls jiggling about at the United Center.
But whenever I go to a sports event and wind up finding myself seated near the nitwit who persists in doing his own round of heckling always makes me wonder why I have to sit near the idiots.
Because that is what such people truly are. I always figure that it’s a waste of time to be trying to get a ballplayer’s attention while he (or she) is on the playing field. If the athlete truly has a clue, they’re so focused in on what they’re doing that they don’t know we exist.
IF THEY ARE aware of our presence, then we’re interfering with the game on the field.
Which likely was the intent of the Miami meathead who took it upon himself to distract Noah. He probably is going about these days telling everybody who will listen about how HE singlehandedly influenced the outcome of Sunday’s game.
Which, by the way, Miami won, 96-85. More people are talking these days about what punishment they think Noah should receive, rather than the fact that Miami now has a two games to one lead in the best-of-seven playoffs.
Any time a nitwit provokes more attention than the athletes themselves, then that is the sad commentary on our society.
-30-
Posted by Gregory Tejeda at 12:01 AM

Lol! that was fun. I just watched the video on youtube and i was like WOW! how ironic that HE called a guy gay. yay!