End of World as we knew it? Not likely

Let me state up front that I fully expect to awake on Sunday with little or nothing around me having changed.
So yes, I’m skeptical of all this talk of “the Rapture,” which is the moment when the faithful will be carried off this Earth to a better place (Heaven?) while the rest of us are left here to suffer the End of the World.
A RELIGIOUS BROADCASTER has said that this event is destined to happen on Saturday. Sometime today, those of us who have been faithful to the Christian religion (or more likely, certain sects of it) will be rewarded for their piety while the masses are punished for our wickedness.
Not that any of this is new. There always is someone predicting the End of the World, trying to scare us all into repenting our “sins” and making amends so we can be among the few who do not suffer and can relax for all eternity.
So the idea that May 21 is a significant date? I take it about as seriously as I do those people who seriously believe that the Aztecs (or was it the Mayans?!?) predicted we’re all going to die on Dec. 21, 2012.
Of course, most of these “doomsday” dates don’t get the international fanfare that this particular date does. I haven’t seen Garry Trudeau doing a series of his “Doonesbury” comic strips that this particular date is getting.
I ALSO HAVEN’T experienced anyone making a generous gift of their worldly possessions to me because they won’t need them after Saturday (unlike Doonesbury’s “Zonker” character, who was given a luxury automobile that he thinks will make his experience on the “Hell on Earth” that this planet will become all the more comfortable).

Yes, I find the people who are taking this kind of talk seriously to be scary. 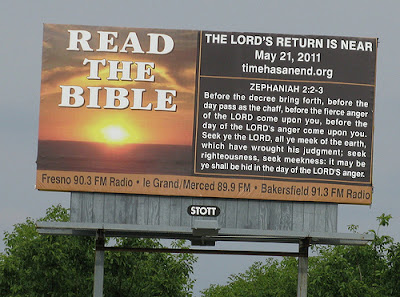 It bothers me whenever I hear these religious-types talk of how we’re going to suffer. Because it seems like what they really enjoy is NOT the idea that they have a chance at an eternal life of peace and harmony.
Instead, they want the idea that everybody around them is going to suffer. As though they can’t be happy unless everybody else is miserable.
ANYBODY WHO SERIOUSLY needs THAT factor in their life ought to quit hanging around a clergyman so often and ought to spend some time with a psychiatrist.
Because they’d all be seriously happier in life if they could learn to quit taking pleasure in others’ misfortune.
But then again, those people are all going to be gone from our lives after Saturday – if the prediction is true. For it also says that this planet is going to become a miserable place to exist; making us wish we were dead.
Of course, that will happen on Oct. 21 – which is the date that the Universe as we know it will cease to exist. No more Earth. No more us. Somewhere, all these holier-than-thou types will be snickering at our misery.
THE SCARY THING is that it is true. This planet we call Earth will come to an end some day. Mere science says it is so.
Because the star we think of as “the Sun,” which provides the heat in just the right proportion that allows our planet to support life (all types, not just human) is NOT a ball of gas that will last forever.
The day will come when the Sun becomes a dried-out wad of nothingness. Before that, it will expand to a size so big that it likely will engulf our planet, incinerating it into ashes.
Now I’m sure some people are going to want to think that it is a “God” who is determining when this happens, and that it will happen for a purpose of punishment of the wicked – instead of just being the natural cycle that every star goes through.
NOW HAVING SAID that, I’m also aware that this is a process that takes millions of years to go through. Scientific-types will be able to provide us ample warning for when this planet becomes uninhabitable.
The Sun isn’t about to explode in the next few months.
Not that there’s anything we’d be able to do about it – unless space travel has significantly developed to the point where we can evacuate the masses and go somewhere else (to a place that could support life, which means we don’t know yet of its existence).
So like I wrote earlier, I don’t expect life to be significantly different when I awake on Sunday. I don’t expect the holier-than-thou among us to suddenly disappear from our midst. I fully expect to see Tim Pawlenty begin his presidential campaign come Monday.
WHICH MIGHT ACTUALLY be the ultimate punishment for the rest of us. We’re stuck with these self-righteous types amongst us who try to disguise their arrogance under the cover of religion.
If there really is a God, he’d spare us these miserable people – allowing us to live our lives in peace.
-30-

EDITOR'S NOTE: It seems The Simpsons gave us a vision of Saturday some 18 years ago. I still get my kick out of the thought of a picnic in Hell including German potato salad.

Hey, I'll MAKE the German potato salad when we're there!
Thanks for the link.