Should Rod listen to Rob?

For some two-plus decades, I have covered legal proceedings in assorted criminal trials, and I have come to the conclusion that I don’t think it really makes a difference whether or not a defendant takes the witness stand and testifies on his own behalf.
﻿

Because for as much as jurors are supposed to give the defendant the benefit of the doubt (presume he’s innocent until prosecutors prove otherwise), I have always felt like most trials are over and done with once the prosecution rests its case.
EITHER THE PROSECUTORS have done such an effective job in tossing out fact, rumor and trivia to create the impression that the defendant is guilty that it doesn’t matter one bit what he says, or the prosecutors have failed to use the inherent advantage of their position that the jury is already ready to vote to acquit – largely so they can quit returning to the courthouse and go back to their regular life routines.
If anything, a defendant’s testimony (on those occasions when he – or she – testifies) adds nothing that changes the basic mood of the jury in any given criminal case.
So when I heard the news reports being picked up by broadcasters from a Chicago Sun-Times story that says Rob Blagojevich is advising his brother, former Illinois Gov. Rod, to testify on his own behalf during his upcoming re-trial, I couldn’t help but snicker.
Rob told the newspaper that he thinks his brother is capable of creating enough doubt in the criminal charges against him by testifying, which would allow his attorneys to then bring up portions of the federal wiretap recordings that prosecutors would prefer to think are irrelevant – preferring to use only those snippets out of 500 hours of raw tape that make Rod Blagojevich look particularly venal.
ROB (WHO DURING the first trial was a co-defendant but has since had all charges dropped against him) said he thinks that if Rod testifies, “I think he’d knock it out of the park.”
Now I know there are those people who think that prosecutors would easily be able to make Blagojevich look even more venal if he actually tried testifying on his own behalf, because then they’d be able to question him directly, and under oath.
They think they could either trip him up, or make him look so arrogant that the jurors would wind up despising him even more.
But as I implied earlier, I don’t think it matters.
THE REASON THAT Blagojevich is even undergoing a second trial is because the prosecutors did such a poor job of trying to explain the basis by which the former Illinois governor’s political activity should be considered criminal that the jury couldn’t bring itself to render “guilty” verdicts against the man – except for that one count about lying to the FBI.
Although I still wonder how he could be guilty of that charge if he wasn’t found guilty of anything else.
That verdict from his first trial just strikes me as a jury so overwhelmed by testimony that they felt they had to find him guilty of something, but didn’t really know what it was he did wrong.
And that was in a trial where Blagojevich did not take the witness stand in his own behalf – even though he had gone on for months about how he would testify and drag down the political establishment of this state.
I SENSE BLAGOJEVICH, if he does wind up speaking under oath on his own behalf in his re-trial, wiouldn’t mind trying that tactic this time around.
When he made his house-front manifesto last week to complain about prosecutors trying to limit his defense, he couldn’t help but drag the names of Mayor-elect Rahm Emanuel and Rep. Jesse Jackson, Jr., into his argument – claiming somehow that if they’re not guilty of any wrongdoing, how could he be?
Which could mean that Blagojevich could come off as smarmy and worthy of any penalty that a jury might want to have inflicted upon him – even if prosecutors wind up putting together another confusing case that is meant to intimidate a juror into thinking that something illegal must have occurred.
Because, let’s face it. The charges against Blagojevich aren’t clear-cut venality – no matter how much prosecutors want to believe in their own minds that they are. It’s totally conceivable that Blagojevich is not guilty of any criminal offense – even though his behavior as a politician was petty, juvenile and mind-numbingly vapid. 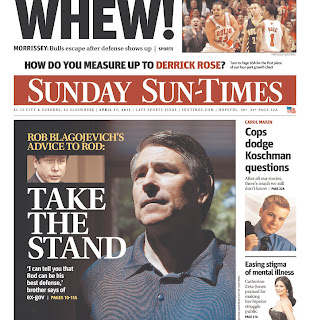 ONLY THE MOST hard-core of rural Republican partisans can have trouble accepting that fact.
The bottom line, I suppose, is that I don’t know what to think of whether Rod Blagojevich would accomplish anything by persuading his attorneys to let him testify this time around. His attorneys will only say that they won’t make that decision until the last possible moment during the legal proceedings.
It may well be that Rob Blagojevich knows his brother and his capabilities better than we do. Perhaps Milorod has it in him to make the prosecutors look ridiculous for wasting federal tax dollars to do a second trial (rather than just accept a prison term of a couple of years for his one conviction from the first trial).
But somehow, I suspect everybody is going to come across as looking ridiculous from “Blagojevich 2 – the Hairdo Returns.”
-30-
Posted by Gregory Tejeda at 12:01 AM