Did you vote? Shame on the majority of you who apparently didn’t bother

It has been 27 years since I first cast a ballot in an election day, and I suspect I take the whole process much more seriously than many others in our society.
For the record, I showed up around 12:30 p.m. at my neighborhood polling place (which for the rest of the year passes for a Lutheran church), and I was Number 77 in my precinct to cast a ballot.
THAT MIGHT SOUND weak, but in my work for a suburban newspaper, I encountered a precinct in Calumet City that attracted all of three voters during the first four hours it was open.
Which is something I truly don’t understand. For as much as people want to complain about their government (which is their U.S.-given right to do), they don’t seem to want to do anything about it. They want to scream “Throw the Bums Out!,” but they don’t want to commit the one act that legitimately could throw the bums out.
If anything, it could be argued that the reason those Tea Party types with their goofy ideological rants that are completely uncompromising (they want us to live in their world, and shut up when it dumps on us) prevailed so much in the 2010 election cycle is because voter turnout was poor.
The real majority let an uncompromising minority have control of so many political posts.
WHICH IS WHY I try to make a point of casting a ballot. I really believe that people who don’t cast a vote on Election Day (or through the early voting process) deserve to have their complaints about our government ignored.
I don’t intend to be ignored on matters of public policy. So I vote for my right to rant and rage about the great issues of the day – and even some of the trivial ones.
I feel like I can refuse to go along with the mythology that the conservative ideologues are trying to impose upon us about the great Ronald Reagan, not only because I remember the man’s flaws first-hand, but because I cast that first vote of mine for his opponent.
Yes, it was a vote for Walter Mondale (whose biography, “The Good Fight,” I’m stumbling through now) and running mate (the recently deceased) Geraldine Ferraro in 1984 – the year that the masses apparently were brainwashed into giving Reagan a second term (electoral college victories in 49 states, with Mondale only winning his home Minnesota).
IT WAS THE first election cycle I was old enough to vote in.
I just missed by a few months being old enough to cast a ballot in the 1983 mayoral election in Chicago (although I can remember that campaign being on the minds – and loud mouths – of my high school brethren who were both disgusted, and elated, by Harold Washington’s victory), which also means I missed being able to vote in that 1982 Illinois governor election – the one in which Gov. James R. Thompson by the slimmest of margins beat the challenge of Sen. Adlai E. Stevenson III.
Now I’m not going to claim to be perfect when it comes to Election Day attendance. Anyone who bothers to take the time to pull the old records in McLean, Sangamon and Cook counties (places in which I have been registered to vote during my lifetime) would be able to find a few gaps.
One I can remember is 1994, when Gov. Jim Edgar solidly defeated Dawn Clark Netsch to keep his post. My one vote might not have swayed that election, but it would have made me feel less hypocritical as I spent the next two years writing stories from the Statehouse detailing the blatant partisanship in which the Republican majority ran the state for two years.
BUT I HAVE to admit that those years in which I didn’t manage to cast a vote was mostly done out of laziness – although I’m sure I claimed back then that I was thorough disgusted with all the candidates. Since by that point in time, I was covering political campaigns and getting to see the candidacies up close.
Perhaps too close, since I got to see warts and all. Close enough that if they had been wearing one of those signs like a long-haul truck reading, “if you can read this sign, you’re too close for your own safety,” I would have been slamming on the brakes to help put some distance between them and me. 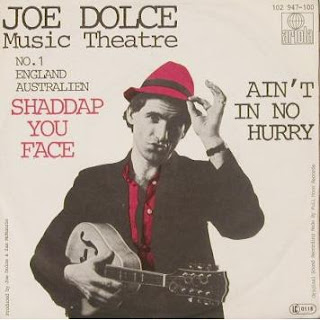 But that’s not a good-enough reason to avoid the ballot box. Particularly since our ability to use it is one of the perks that makes our society superior to others around Planet Earth. So for the 76 individuals in my political precinct who made it to the polling place on Election Day, and those who came after me later in the day, I think we all ought to dig out that old 1980s novelty record by Joe Dolce.
Somehow, “Shaddup You Face” sounds like the perfect retort to those who were too busy/preoccupied/lazy to vote on Tuesday.
-30-
Posted by Gregory Tejeda at 12:01 AM

I guess you missed the new Rasmussen poll showing 48% of the people agree with the TEA Party. Who can be against Limited Government, Low Taxes and Free Markets?