I caught parts of Ken Burns’ “Civil War” documentary film series this past week during a WTTW-TV rebroadcast, giving me a brush-up course on the phenomena that captivated the minds of our nation when it first aired some two decades ago.
But what stands out to me about that 1860s conflict (the 150th anniversary of whose beginning comes up Tuesday) is the fact that it shows how, despite our society’s splits and ideological differences, we’re being very rational these days.
THAT THOUGHT IS much more interesting than a recitation of the battles that took place during the four years of conflict, or the people who will try to spend the next four years claiming that the war had nothing to do with slavery or race relations and try to claim that the concept of “state’s rights” is almighty – even when used to justify abhorrent policies by local officials.
It was only by the slimmest of time margins that a political agreement was reached that averted a shutdown of the United States government because of partisan differences over what should be included in budget negotiations, combined with the fact we have a wealthy (and garish) presidential dreamer who seriously believes he can keep alive the rumor-mongering of those who want to believe our nation’s president is somehow a foreigner – if not an outright subversive.
Some people like to make jokes about how we’re still fighting the Civil War in this country – on account of the fact that the states that once tried secession to create a nation in their own image seem to be the ones that are at the heart of the ideological opposition we see today.
If anything, that is a gross overstatement, and people who say that should be ashamed of themselves – just as much as those nitwits who think they can tag the “socialist” label on Barack Obama and have it stick.
THE FIRST PARTS of Burns’ documentary reminded us of how the partisan split of our nation had been growing throughout the early years of the United States to the point where the 1860 election of Abraham Lincoln as U.S. president (even though he wasn’t even on the ballot in most southern states) could be seen as “the final straw” that caused those people to take up arms and try to engage in the legal rigamarole that would allow them to think they were an independent nation in and of themselves.
By comparison, I didn’t see anyone talk about secession in the weeks of November and December of 2008 when Obama was our president-elect.
I don’t doubt that there were people who were disgusted that their vision of what this country ought to be about was repudiated with that election cycle, and their views may well have an ideological basis similar to what was going through the minds of those U.S. residents of 1860.
But we’re still sticking together. We’re still one.
OUR PARTISAN FIGHT these days is one between Senate Majority Leader Harry Reid, D-Nev. (whom many Democrats have had their objections to on the grounds that he’s too conservative) and House Speaker John Boehner, R-Ohio (who has the hard-core ideologues egging him on to be stubborn and try to turn negotiations on a continuing budget resolution into a statement about abortion).
We have a federal government that came so close to being shut down – with certain “non-essential” functions put on hold until reason rules. A shutdown would have been uncomfortable and I’m sure some people would have been inconvenienced – particularly if the partisan fight stretched on for any serious length of time.
Yet we’re not shooting at each other.
To the best of my knowledge, we don’t have any Tea Party types plotting to mark the 150th anniversary Tuesday of the attack on Fort Sumter in South Carolina by staging some sort of attack on a U.S. military position.
WHILE THERE MAY be a few fringe types who think this way, the bulk of us see them for the loons that they are. I believe even the Tea Party types would find such an act repulsive – no matter what kind of partisan rhetoric one would try to couch it in.
Personally, I view the Civil War is the moment in our history when the cultural differences of our society’s various elements became so intense that they spilled over into violence. It was the extreme that I think many of us don’t even want to repeat.
There’s even the sense that the ideologues who complain about our current system aren’t any kind of majority (I couldn’t help but notice two Gallup Organization polls from earlier this week – one says that more people view Donald Trump unfavorably than favorable, while the other says that by a nearly 2-1 ratio – we want our politicians to reach agreement on the budget and aren’t interested in government shutdown as a partisan statement.
We may think we’re split now. But we practically love each other compared to those early months of 1861. 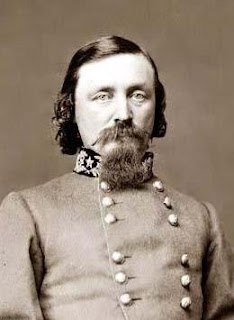 WE WANT RATIONALITY and sense to prevail in a way that it didn’t on that day in July 1863 when General George Pickett led his troops on a mile-long charge on open ground under heavy artillery fire.
Some think of “Pickett’s Charge” as some sort of act of men being brave even though they knew they were likely to perish. I’d say whoever came up with the idea for those men to do such an act is crazier than any of those “birthers” who persist in saying that Obama wasn’t born in Hawaii nearly 50 years ago.
-30-
EDITOR’S NOTE: Just a thought. In the same way that the administration of President Barack Obama turned a lot of our politicos into nationally significant officials, the administration of Abraham Lincoln made many of Chicago’s business types very wealthy men because of the way they were able to sell their goods to supply a military at war.
Posted by Gregory Tejeda at 12:01 AM

Boy do you need to study more history. The concept of secession was written into the acceptance of the Constitution by even some states in the north. The theory was I joined willingly, I can leave just as I left the British Empire. Oh, I guess there are no democrat ideologues, Right, Have you ever heard the name Pelosi? Typical of the liberal bias of so many "political reporters". You honestly think that the South offered up one fifth of it's manhood for race? By the way the winner writes the history.