Shakespeare from people who say “pop?”

I’m not sure what to think of the idea that Saturday is “Talk Like Shakespeare Day” across Illinois, including Chicago.
﻿
Sure enough, Gov. Pat Quinn made the proclamation saying that people should make efforts to speak in Olde English if at all possible, as a way of paying tribute to the playwright who – if not for mankind’s ultimate mortality – would now be 447 years old.
STATE OFFICIALS CITE the fact that there are at least 1,700 words in modern-English vocabulary that owe their origins to Shakespeare’s plays.
They also cited the Chicago Shakespeare Theater, which said people could use “thee” and “thou” instead of “you” when they speak. Insult phrases such as “jackanape” and “doghearted dewberry” also were suggested for those moments when one needed to tell someone off.
Although considering that many people, including some Cook County government employees, had Friday off because they used Good Friday as an excuse to not go to school or work, and some others chose to make Earth Day events part of their Friday routine, I’d like to think that there just wasn’t as much need for insults. A three-day weekend should put us all in a cheery mood.
Besides, this is Chicago, where there are many people who’d like to think we have our own unique language – much of which is meant to counter the mentality behind much proper English.
NOT THAT I’M saying Chicagoans are functionally illiterate. It just seems like a “Talk Like Shakespeare Day” would be anti-Chicago at its very character.
Take an all-too-common quickie lunch of a sandwich and a soda pop – which in Chicago-speak can easily be a “sammich” and a “pop.” Before you think I’m mocking anyone, consider that I believe the only people who are worthy of derision on this point are those who self-righteously insist on saying merely “soda.”
Or the use of the word “prairie,” which in much of the world can bring to mind an image of an open field with natural grasses growing two or three feet high. A thing of natural beauty. Something untouched and unspoiled.
But in Chicago-speak, a vacant lot in between existing homes or other structures whose grasses are overgrown weeds. Something that is definitely spoiled and in need of new construction – except for the fact that the lot may well be too small to accommodate a traditional structure, making the land virtually worthless.
UNLESS SOMEONE CAN manage to buy up a few more surrounding lots and then tear down everything to create some super-huge structure (which likely will then be considered to be an architectural eyesore that people will wish could be torn down).
Definitely not something lasting like the literature of Shakespeare. Not even anything beautiful in its graphic bluntness such as the literature of Nelson Algren (whose own fiction about the Chicago of old is more honest than most reporting that occurs on any given day).
Insofar as what constitutes Chicago-speak, one can find many websites around the Internet that will give you would-be glossaries that define various terms – most of which are merely phonetic pronunciations of the way in which the English language is mispronounced by past generations of city residents who were still learning the language.
Such as one website that tried passing off “Grachki” and “Frunchroom” off as legitimate Chicago-speak words for “garage key” and “front room” respectively.
IS IT REALLY right to think that a city whose residents used to repeatedly elected a mayor who openly referred to “O’Hara Field” (for O’Hare International Airport) are going to get all worked up over the thought of saying “thee” and “thou” for a day?
It almost makes me think that Quinn, who likes to go on and on about how he lives on the West Side of Chicago, is forgetting his roots. Perhaps it is because his long-time residence in the Austin neighborhood is dangerously close to suburban Oak Park.
This sounds like the kind of thing that residents of that town would enjoy doing – in addition to pretending that Ernest Hemingway was in any way respected as an author when he lived in that Illinois town. 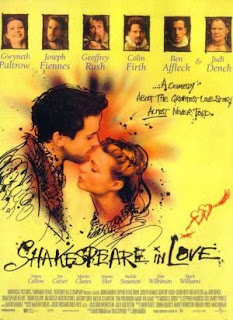 So excuse me for not trying to write a mock commentary in anything approximating Olde English or the writing style of William Shakespeare. Unless I could have a few hours alone with the youthful Gwyneth Paltrow who appeared many years ago in “Shakespeare in Love,” it wouldn’t be worth it.
FOR I COME from Chicago, the land where pizza is made in a deep pan and stuffed with all kinds of fattening foodstuffs and where our sports teams tend to get more attention than any author ever would.
On those occasions when we get off our duffs, step away from the television and go to see a game, we go to “Soldiers Field” or “Cominskey Park.” Going to a “Globe Theater” sounds like a place that gets raided by the cops when officials want to appear as though they’re cracking down on vice.
-30-
Posted by Gregory Tejeda at 12:01 AM

I really like the way you've portrayed your perspective about Shakespeare .. keep up the good work buddy :-) Your blog is worth bookmarking