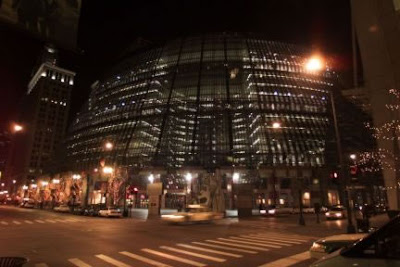 All the financial gloom coming from state government these days is making the Thompson Center a depressing place. Photograph provided by State of Illinois.

I can think of one group of people prepared to come out fighting while watching Gov. Pat Quinn announce a series of cuts that need to be made to balance out the state’s budget.

Educators. Or pointy-headed school bureaucrats (if you are of a certain paranoid political persuasion).

THE FACT IS that the state is supposed to be the primary source of funding for public schools across the state. So when the state starts making serious cuts in its spending, it is inevitable that the schools will get hit too.

In short, a lot of political people who like to claim they’re the “education” senator (or governor, or whatever office they actually hold) are going to wind up having their actions this spring twisted by political spin against them into acts detrimental to the status of schools in Illinois.

Now perhaps I’m a little more aware of this because I do some work for one of the daily newspapers based in the Chicago suburbs. In the course of my reporting, I have encountered school officials who are upset that the state political people they count on to fund programs they rely on are now likely to back off.

That is going to translate down to school districts having to make some serious last-minute choices about how they do their business this school year.

I’M NOT GOING to bore you with the specifics of the incidents I wrote about this week. Unless one happens to live in a pair of towns in south suburban Cook County, the specifics are irrelevant to you.

But the tone of their concerns is universal.

I had one school superintendent tell me his district had managed to dodge the most serious cuts thus far. But I’m wondering how he’s feeling now that Quinn included $150 million in cuts for the Illinois State Board of Education among his budget changes.

Do we have school superintendents all across the state experiencing headaches at the thought of what they’re no longer going to be able to do?

WHAT COMPLICATES THE situation is that most public school districts are in the process of putting together their budgets now. Actually, they have been at it for months, working through all those details trying to figure out how much they can count on from different sources and how much they were going to have to hit their local property taxpayers for.

But by now, they thought they basically had their budgets set, with formal approval likely to come in the next few weeks – just as the new school year begins.

There are bound to be some officials who rant and rage at the thought of having to pick up some of these expenses on their own. In poorer communities where the local tax base just isn’t as solid, the likelihood is that some expenses will have to be done away with.

Worthwhile educational programs will have to die for the time being. And we all know that once something goes away even for a little while, it runs a big risk of never coming back.

THIS SITUATION COULD widen the gap between the “haves” and “have-nots” among public school districts.

Now I realize it is not just education. Everybody is getting hit.

Most of the accounts I am reading about Quinn’s cuts proposal focus on the idea of fewer prison guards and state police troopers, and many Department of Human Services programs being slashed.

So perhaps schools officials across the state should watch it before they start spewing sanctimonious rhetoric about how they’re being picked on. They have the potential to appear to be too full of themselves to be taken seriously.

NOW THERE IS an alternative, although it’s not one I ever expect to take place. Quinn says he’d like it if state employees would give up the raises their union contracts call for. That would help avert the cuts of prison guards, state troopers and all the other funding that will be slashed.

I expect the unions representing state employees to dig in their heels and resist, and perhaps this is good. Is it really the fault of the state employee (whom some paranoid political types might also view as bureaucrats) that the state’s finances are such a mess?

Should it really wind up being dumped on their shoulders to help the state work its way out of the budgetary boondoggle that it currently resides in?

In short, I believe that it was more realistic for Quinn to expect the General Assembly to approve an increase in the state income tax, than to ever expect these salary cuts to take place.

AND NO, I wasn’t surprised that most legislators instantly reverted to partisan political modes when the words “income tax increase” were uttered. We literally had a case where Illinois House Minority Leader Tom Cross, R-Oswego, led an effort to get all of his GOP colleagues to stick together and oppose anything that could be considered a tax increase. That alone would have killed it, even if Quinn had been able to unite Democrats behind his proposal.

He’s gambling on the fact that voters next year will somehow consider the Republicans to be “heroes” in this financial mess for sticking to their guns – even if it means the gap to provide enough money for all the responsibilities state government has remained huge.

I’m more inclined to think that the true trend could very well be the one expressed by these school officials, who don’t seem to see this as “Democrat” versus “Republican.” It’s all about incumbents.

Could 2010 wind up being the election cycle that results in voters taking out their frustration with the mess that’s brewing by voting against every incumbent – regardless of their political persuasion?